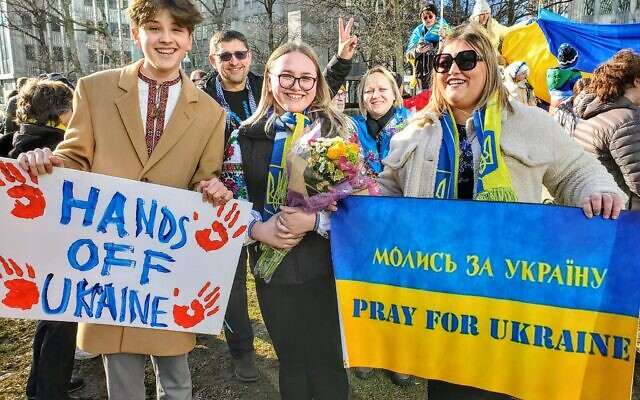 We recognize that there is a lot of information and misinformation circulating regarding Ukraine and Russia. Many find it confusing to follow, and difficult to understand what’s going on. The Chronicle continues to cover this ongoing crisis with fair and reliable news articles, and to provide insight and perspectives through analysis and opinion pieces. We publish most of these items in the weekly printed edition, but there’s even more content on our website. We’ve compiled some helpful links here. The links to articles published in the Chronicle are in reverse chronological order, with the most recent first.

If you have suggestions or news tips please email us at Newsdesk. To submit a letter to the editor about something that we’ve published please send it to Letters.

Published in the Chronicle: News articles

Ukrainian Jewish food: Remember the past through recipes
A culinary tribute to the Jews of Ukraine

Bennett says Putin apologized for his deputy’s remarks on Nazis
Russian foreign minister said it was possible for Nazi ideologies to flourish in Ukraine because “in my opinion even Hitler had Jewish origins.”

Local refugee recounts journey from Afghanistan to Pittsburgh
“We have to stretch our arms out and help as much as possible,” Finkelstein said.

First baby born at Israeli field hospital in Ukraine
‘After a very difficult week, finally some good news,’ Foreign Ministry announces, adding that both the baby and mother are well.

Ukraine invasion puts Chabad of Russia ‘between a rock and a hard place’
Chabad in Russia has drawn criticism from abroad for failing to condemn the war; it’s also facing criticism from Russian nationalists, often in antisemitic terms, for not adequately backing Putin.

War in Ukraine puts a crunch on matzah prices
“I think the U.S. market will feel it. I think we are probably going to have a deficit of shmura matzah this year.”

Pittsburgher’s train — and rabbinical students — shepherd Ukrainians to safety
In light of Jewish history, there’s a dramatic backdrop to what’s occurring on German platforms. For the moment, all Henry Posner III sees is the task ahead.

Genealogy workshop to raise money for Ukraine
All proceeds go to Razom for Ukraine and the American Jewish Joint Distribution Committee.

Anonymous Federation donor is matching donations for Ukraine relief
Donations will be matched up to $500,000.

Federation representatives observe Ukrainian relief in Poland
“It’s very stark to see at these sites women and children and senior citizens…believing they’re going home at some point at the end of this war,” Finkelstein said.

53 suitcases and a ticket to Warsaw: One woman’s Ukraine relief effort
The daughter of Holocaust survivors gathered donations of clothing, toiletries and suitcases from her friends and colleagues and headed to a synagogue in Warsaw to help those starting life from scratch.

Bennett is playing the ‘primary’ role in mediating Russia-Ukraine talks, report says
Financial Times says Israeli prime minister is the key international broker between Moscow and Kyiv, as the two sides inch toward a ceasefire deal.

Their country suddenly a pariah, Jews look for ways to leave Russia
Israel has eased its immigration process for Russians, but embassy wait times are unlikely to be affected.

Federation gives $74K to local relief and Ukraine aid
Half of the funds will support local agencies that provide emergency cash to people in need, and half will help relieve suffering caused by the Russian invasion of Ukraine.

Hundreds of Ukrainian refugees have landed in Israel. Thousands more could follow.
About 90 orphans between the ages of 2 to 12 were among the new immigrants.

Israel to establish a field hospital in war-ravaged Ukraine next week
Facility to be operated by pair of HMOs, hospital staff members, will include emergency and delivery rooms, a primary care clinic

Inside the Jewish response to the mounting refugee crisis in Poland
Long bus rides, temporary shelters and lots of phone calls.

PA silent on Ukraine as Hamas official declares ‘end of American domination’
Both Ramallah and Gaza have stayed mostly quiet on the Russian invasion; PA and Hamas have long had ties to Russia and little interest in losing Moscow’s support.

Babyn Yar wasn’t bombed. But Ukraine’s Zelensky finds a useful tool to rally Jews to his cause.
Despite reports, the rocket that damaged the Kyiv TV tower did not in fact harm the Babyn Yar memorial, located in an adjacent area.

Israel to join UN condemnation of Russian invasion
Yair Lapid: “Israel was and is on the right side of history.”

Volodymyr Zelensky was a Jewish comedian. Now the world’s eyes are on him.
Zelensky, the first Jewish president of Ukraine, has quickly become one of the most consequential and prominent Jewish world leaders in recent decades.

Ukrainian Jews, scarred by a bloody history, find themselves refugees once again
Tens of thousands of people have poured over the border from Ukraine into Moldova, often described as Europe’s poorest country. Among them are hundreds of Jews from around Odessa.

Kyiv rabbi opens synagogue as a refuge: ‘No bomb shelter, but we can be together’
Jewish leader in beleaguered Ukrainian capital fears looting as he stockpiles food, fuel in community center to help the elderly, poor Jews unable to flee the city.

Who are Ukraine’s Jews, and how is Russia’s invasion affecting them?
Given their traumatic history, Ukrainian Jews are feeling more than a little frightened at the possibility of a protracted war.

Published in the Chronicle: Analysis and opinion pieces

Stop the war crimes
We support the ramping up of sanctions against Russia and the continuation of significant funding for military and humanitarian aid for Ukraine.

How a tiny Italian village brought 14 mothers and children to safety and peace
In Esther’s Name: The Ukrainian Refugee Project

The enemy of our nemesis
Some 2.5 million Ukrainians have escaped to Poland, more than any other of Ukraine’s neighbors.

The heirs of Stalin, world peace, and Passover
From Beacon Street to Red Square and back.

The black hole of Russia
I have read with heartache a letter supporting Putin’s regime’s slaughter in Ukraine signed by the entire leadership of the top Russian scientific society.

Chronicle poll results: Nuclear weapons
We asked our readers if they were concerned about the potential for nuclear weapons to be used anywhere in the world in the next year. Here’s what they said.

Ukraine, Russia and the unbearable lightness of ‘never again’
Will Jewish memory become a prison of our powerlessness?

Zelensky’s inspiring leadership
Zelensky is Ukraine. Zelensky is Jewish. He seems to be drawing courage, strength and purpose from both.

Chronicle poll results: High price of gas
We asked our readers if the high price of gas was causing them to rethink their driving habits. Here’s what they said.

Is ‘never again’ now? The Ukraine war ignites a recurring debate
Politicians and advocates differ over when a war is not just a war but genocide.

The Jewish post-rescue era ended with the war in Ukraine
This crisis will be remembered for the way it has put Jewish organizations — including Jewish media — back on rescue footing.

I went to Ukraine to find my roots. The KGB found me first.
And like the Jews, all Ukrainians were subjected to genocide.

Why Israel must stand squarely with Ukraine
Those who condemn Russia’s attempt to destroy a freedom-loving democracy bolster the pressure for actual measures to help thwart Ukraine’s overthrow.

The Ukrainian refugee crisis and its dire consequences
With the fall of Communism, the Jewish communities of Eastern Europe slowly reemerged. Ukraine is one of the shining lights.

Ukraine in turmoil
We applaud the quick mobilization and careful planning of the Jewish relief effort.

The Times of Israel

JAFI (The Jewish Agency for Israel)

Foundation for Defense of Democracies (FDD)