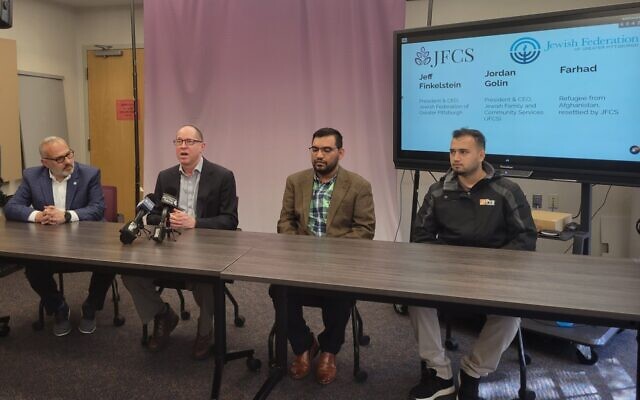 Farhad Ariai has lived in Pittsburgh for just over two months.

The refugee, his wife and his aunt were evacuated from Afghanistan — first to Qatar, before being sent to Germany and then the United States — after the collapse of the government and the fall of Kabul late last year. Ariai worked for the U.S. government and military while in Afghanistan.

Joined by interpreter Ahmad Yousofzay, JFCS President and CEO Jordan Golin and Jewish Federation of Greater Pittsburgh President and CEO Jeff Finkelstein, Ariai, 25, spoke of his experiences during a press conference at JFCS’ offices on April 14.

Through Yousofzay, Ariai began his remarks by thanking the U.S. Army, government and JFCS for their assistance in helping him leave Afghanistan and settle in Pittsburgh.

He said the process was long and, at times, difficult. He recounted the journey, leaving Afghanistan with only a small bag, his bank account frozen and the country’s infrastructure decimated by the Taliban takeover. Nonetheless, he and his family felt secure, thanks to the help provided by the U.S.

“We received all kinds of help,” Ariai said. “We never felt alone. Help and opportunities that have been provided was awesome. Thank you.”

Ariai has stayed in a hotel since arriving here, he said, explaining that securing long-term housing and employment has been difficult because he doesn’t yet have the documentation needed by lenders and employers.

He has been in touch with family in Afghanistan, he said, but the news has not been good. Relatives still in the country have relayed to him that the economy has collapsed. He was not sure if they were safe, saying they, too, were in danger because they assisted the U.S.

JFCS, he said, has resettled more than 250 refugees in three months. In a typical year, the agency resettles about 200.
The process has been chaotic, Golin admitted, saying that it’s not simply the numbers that have been challenging but an accelerated timeline as well.

JFCS, he said, usually has a two-week notice before refugees arrive. With those fleeing Afghanistan, though, the agency sometimes was only told as little as five hours in advance of a refugee’s arrival. The shortened timeline has made it difficult to secure needed resources.

The Pittsburgh housing crunch hasn’t helped. JFCS, Golin noted, has had to use extended-stay hotels for refugees like Ariai when it can’t locate apartments.

“The job of a resettlement agency like ours,” he explained, “is to greet the family, bring them to their new home, orient them to life in the country.”

JFCS, Golin said, provides information about the health care and education systems and cultural orientation. It also assists in finding jobs for new refugees who have no U.S. work history and, often, can’t speak English.

This work is expected to be completed in three or four weeks, after which the government no longer provides funds, Golin explained.

In addition to its work with Afghan refugees, Golin said he expected JFCS to begin assisting Ukrainian refugees as well. The agency has received no timeline or number of refugees to expect in Pittsburgh, but Golin said up to 100,000 Ukrainians are estimated to eventually be resettled in the U.S.

Finkelstein was at the Poland-Ukraine border at the end of March. He drew parallels between the Ukraine refugee crisis and the Passover story.

“We have to stretch our arms out and help as much as possible,” Finkelstein said.

He said he was particularly touched by the women and children he saw while there, noting that most Ukrainian men aged 18-60 are needed for the war effort and aren’t allowed to leave the country.

The arduous journey for the refugees, Finkelstein said, included not only a trek through war-torn Ukraine but waiting in lines for up to 14 hours to enter Poland.

“Those sights will forever be seared into my memory,” he said.

“I think it’s important to remember,” Golin said, “that we are a country of immigrants. We are a country built by people who have come from all over the world seeking a better life. That’s a tradition we’re continuing today.”

For Ariai, that better life has already begun. At the end of the press conference, he announced that he and his wife were expecting their first child. The due date: July 4. PJC