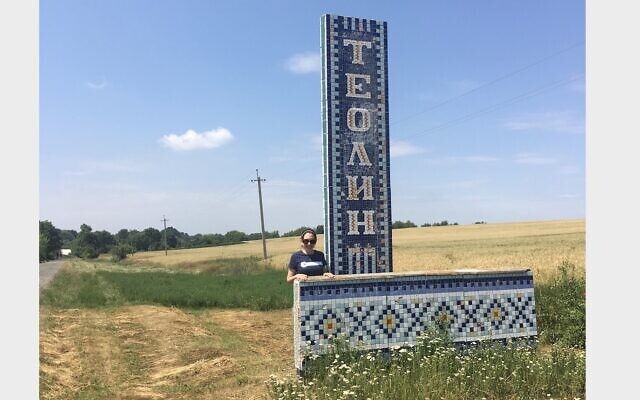 The entrance of Teolyn, Ukraine, a small village which was the former residence of David and Anna Melnick Satin, who immigrated to the U.S. in 1903 and lived in Homestead from 1907-1921 (Photo courtesy of Tammy Hepps)

Tammy Hepps wants to help the war-torn people of Ukraine.

So, the Pittsburgh-based genealogist is knocking down two birds with one stone — teaching area Jews how to mine their Ukrainian heritage while helping raise money for those living through the conflict there.

“Jewish Roots In Ukraine: Context and Connection,” which is billed as a genealogy workshop to benefit Ukrainians, will be held online on Sunday, April 3 from noon to 4:30 p.m. Tickets are tiered into three categories and begin at $36, Hepps said.

All proceeds go to Razom for Ukraine and the American Jewish Joint Distribution Committee — two organizations working to make a difference on the ground in Ukrainian cities and villages. So far, the event has pulled in about $20,000 to donate, Hepps said.

“We’re thinking that [the workshop] is a way to address what’s going on over there,” Hepps said. “We really felt there was an opportunity to say, ‘What is … the history of the Jewish people in Ukraine? What is Jewish identity? What is Ukrainian identity?’”

The workshop is broken into four segments: “Your Family’s Context: The History and Legacy of Jews in Ukraine,” “How to Trace Your Family Back to Ukraine,” “How to Access and Use Jewish Ukrainian Records,” and “How to Connect Meaningfully to Your Heritage Today.”

Many Jews who believe their ancestors hailed from Russia sometimes find that “Russia” now falls within the borders of modern-day Ukraine, which was once a cultural center for Judaism in Eastern Europe, Hepps said.

Hepps moved to Pittsburgh about seven years ago to work on a history project related to Jews who lived in Homestead. Much of her research — as well as research about her own family — took her to Ukraine, where she traveled before COVID-19.

Ukraine, Hepps said, has “an interesting and complicated Jewish history.”

The Squirrel Hill resident, an employee of the City of Pittsburgh, has dabbled in genealogy.

“I’m very interested in Jewish history, in general, and … that got me involved in doing our family tree,” Mackler said. “When the world’s attention started to focus on Ukraine, it brought up more of those connections and my husband’s family’s connections.”

Mackler’s second great-grandfather, who was born in 1835, emigrated from Ternopil, Ukraine, to Iași, Romania, in the 1860s. One of her husband’s grandparents also came from Ukraine.

“I grew up hearing about how vicious Ukrainians were to Jews,” Mackler said. “Learning more about the more modern history of Ukraine and seeing what the Ukrainian people are like today has helped me overcome some of that. The word ‘some’ is important there.”

Mackler said her interest in Ukraine and the upcoming event was spurred by news of the war.

“I always think about how my family’s history and the history of the Jewish people connects to any place in the news,” she said. “Any place I travel to, I think of a lot of people in those terms. I’m really excited to learn.”

Hepps said the workshop will be recorded for future viewing by those who buy tickets.