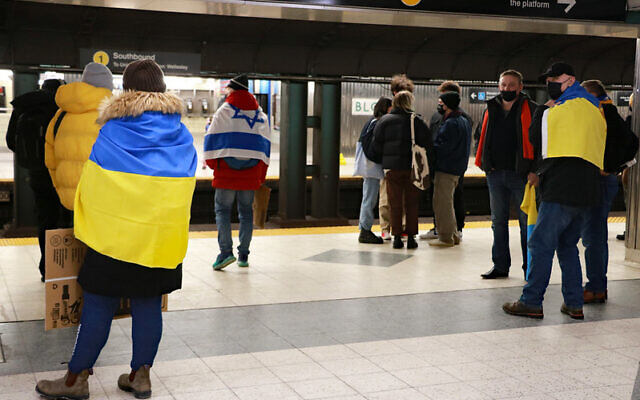 Photo by Can Pac Swire, courtesy of flickr.com.

Though its every instinct and principle impels it to condemn Russia’s attempt to quash Ukraine, Israel has for days been balancing that moral imperative with legitimate concerns about the consequences for its own safety. This attempt to somehow avoid taking sides, however understandable, is increasingly untenable — morally and practically.

Israel knows it should be standing in solidarity with the brave underdog, the young democracy battling desperately to resist a mighty autocratic force that never accepted its legitimacy and now hopes to achieve its elimination. After all, that’s been pretty much Israel’s reality throughout our modern existence.

But its leadership is sensibly worried about the well-being of Russia’s still-sizable Jewish community were it to take a clear public stance against Vladimir Putin. Furthermore, it fears alienating Putin where Iran is concerned, as regards both the nuclear deal negotiations in Vienna and Tehran’s relentless efforts to establish a strong military presence across our northern borders.

As America has somewhat disengaged from our part of the world, Russia has become increasingly influential, especially in Syria. Israel has been generally free to carry out airstrikes on Iranian and Syrian military targets, and to prevent the transfer of weaponry, only as a direct consequence of Russia’s indulgence. Were Israel’s complex, nuanced but hitherto warmish relations with Putin’s Russia to plunge into enmity and hostility, Israeli security on its Syrian and Lebanese borders, its capacity to protect itself, would be seriously undermined.

As former Israeli deputy national security adviser Eran Lerman put it on Sunday, “If in two years from now we sit under a barrage of Iranian-supplied high-accuracy rockets killing our citizens because we’ve been denied the capacity to prevent this from happening, that’s also a moral question.”

These are profound concerns, and Lerman’s scenario is all too credible. Israel’s reluctance to take the side it knows it ought to take cannot, in short, be put down to some kind of cynical political expediency. It is born of the most tangible, immediate and vital duty: the obligation of the government, first and foremost, to protect its citizens.

Israel can reasonably observe, furthermore, that a complacent, feckless world proved resolutely disinclined to act when Putin was massing his military forces against Ukraine, and only began to muster the beginnings of a response, with accompanying condemnations, after Russia went to war.

Moreover, much of Israel has long been rather fed up with many Western moralizers, whom it believes underestimate its peril in this region, ignore the evidence that relinquishing contested territory (in southern Lebanon and Gaza) has only brought murderous forces closer to our sovereign doors, and single us out for radically disproportionate and frequently ridiculous criticism (such as Amnesty International’s latest screed, which accuses Israel of enforcing apartheid even within our sovereign borders — upon the only democratically empowered Arab citizenry in the neighborhood).

As Foreign Minister Yair Lapid, quoting his late father, remarked in an interview earlier this month, “You know what the world is going to do if Israel is destroyed? They’re going to send a nice letter… And maybe they’d give some nice speeches in the UN.”

Nonetheless, the same Yair Lapid on Thursday declared that “the Russian attack on Ukraine is a serious violation of the international order. Israel condemns that attack, and is ready and prepared to offer humanitarian assistance to Ukrainian citizens.”

Prime Minister Naftali Bennett, by contrast, has maintained a wary ambivalence, offering his mediating services, lamenting the humanitarian crisis, but carefully declining to point the finger of blame at Moscow.

Their divergent responses are said to be coordinated — principled Lapid and pragmatic Bennett. Still, on Sunday, Lapid was quoted saying in a closed meeting, in an unconfirmed report, “Israel must be on the right side and condemn dictators who attack democracies.”

I hope that’s what he said. It’s what Israel should be saying out loud. Principle and pragmatism are actually aligned.
Upholding a principled stance has practical as well as moral benefits. Those who condemn Russia’s attempt to destroy a freedom-loving democracy bolster the pressure for actual measures to help thwart Ukraine’s overthrow. For Israel to join that chorus is to underline its own place as a nation with values that merit and demand international support and protection — a nation that others must champion and invest in protecting.

To join that chorus, moreover, is to maintain and broaden international identification with and empathy for Israel, when to hedge and prevaricate — no matter how legitimate the sensitivities — is to risk further diminishing that identification and empathy. And that has direct consequences for Israel’s diplomatic and military room for maneuver.

To show solidarity with Ukraine, crucially, is to stand shoulder-to-shoulder with the United States, our most important ally. Israel must always maintain the capacity to defend itself by itself, and we ask nobody else to risk their lives in our defense. But the U.S. leads the international community in ensuring we have the diplomatic and practical space to operate, supplies us with crucial weapons and helps us to maintain our regional military advantage.

Finally, as the war has developed these past days, Israel’s effort to avoid antagonizing Putin has become increasingly untenable.

It should not and cannot allow itself to stay silent when Putin demands that Ukraine’s army carry out a coup against its duly elected president, when he repugnantly claims to seek to “denazify” the country, and when he brands Volodymyr Zelensky — a Jew whose grandfather fought the Nazis and whose grandmother narrowly escaped them — “a neo-Nazi.”

I called Natan Sharansky as I was finalizing this article, wanting to get his input. His position was so coherent that I wrote up what he said as a separate interview. But I want to reference his wisdom — the wisdom of an intensely practical moral icon who just so happens to have been born in Donetsk.

Putin, said Sharansky, “is seeking to change the entire post-World War II order in which your stronger neighbor cannot take away your freedom. To challenge the entire free world. He believes that he is the only one in the world ready to use force, and that he will restore historic Russian dominance… The only thing that can stop him is the absolute solidarity of the free world.”

Ultimately, Israel’s own well-being requires that gutsy democracies beat back brutal aggressors. That’s the history we’ve been writing ourselves for three-quarters of a century.

We hope and believe that to support and take action to ensure Israel’s survival is to stand on the right side of history. Since the same applies to Ukraine, we need to say so. PJC

David Horovitz is the founding editor of The Times of Israel, where this first appeared.