Jill Shames arrived at the Ukrainian border on March 3 with a sense of community and a set of punching bags.

The former Pittsburgher and fifth-degree black belt in Okinawan karate is a trained social worker and has spent nearly 30 years teaching empowerment self-defense, often helping clients transition from what she described as “victim to hero.”

Shames, 62, made aliyah in 1996. Speaking by phone from her home in Rehovot, Israel, she said she’s worked with pediatric cancer patients and as a rape crisis counselor, but never before on the frontlines of war. Nonetheless, days after Russia invaded Ukraine on Feb. 24, Shames accompanied United Hatzalah, a volunteer-based emergency group, on its humanitarian mission to Moldova, a country bordering Ukraine.

United Hatzalah was looking for medics and people capable of providing psychological first aid to refugees. Shames said she felt compelled to volunteer given the nature of the work and its timeliness.

Citing earlier experience with trauma victims, Shames said there is a “golden period” after an incident occurs “where if we can get to them early enough we will be most effective.”

United Hatzalah has operated in Ukraine since 2016, according to organization representatives. Following Russia’s invasion six weeks ago, United Hatzalah reiterated its support for Ukrainians.

Shames said that before her March 3 arrival, a separate team organized by United Hatzalah created a space for volunteers and refugees.

According to United Hatzalah, a “jump team” arrived at the border of Ukraine and Moldova and performed an initial needs assessment on Feb. 27. The volunteer group, comprised of 12 EMTs, paramedics, doctors, a dentist and members of the psychotrauma and crisis response unit, was followed by another team of nearly 40 volunteers — including Shames — who left Israel on a chartered plane on March 2 with 15 tons of medical supplies, food and humanitarian aid.

By March 3, just over 1 million people had fled Ukraine, according to a United Nations tracker.

When Shames returned to Israel on March 8, the number had doubled. 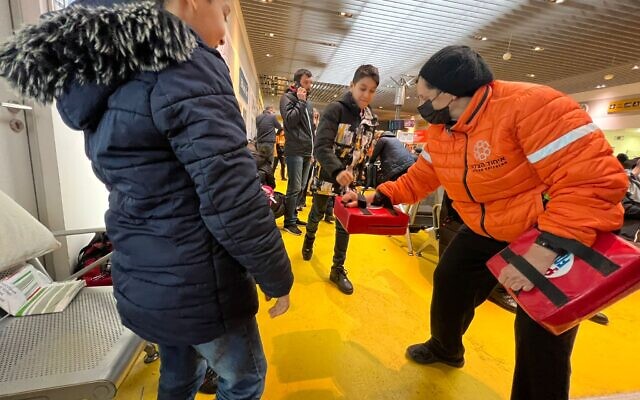 During the six days Shames was in Eastern Europe, she and other volunteers provided thousands of refugees with food, blankets, directions, even respite. Many of the people traveled for two or three days before reaching Moldova. In some instances, refugees needed help with suitcases. In other cases, Shames said, a mother just needed someone to push a stroller or keep a child occupied for a few minutes.

Shames learned how to greet the refugees in their native tongue with meaningful messages, such as “welcome,” “you are in a safe place” and “you are not alone,” she said.

“The most important thing that a trauma survivor needs to know is that they’ve reached safety.

Throughout brief and lengthier interactions with the refugees (the latter required translators), Shames said she practiced a deliberate form of listening.

“Most people when they are listening are thinking about how they are going to respond,” she said. “This kind of listening is where all of your attention is on the person speaking, and, even without trying, your body language starts to mimic their body language, and you can feel in your own body some of the emotions that they are feeling.”

Listening that way lets the speaker know that even if their problems can’t be solved, they are nonetheless heard, Shames said, “The fact that we can do that, and reflect back to them we understand they’re suffering, is one of the most healing things one person can do for another.” 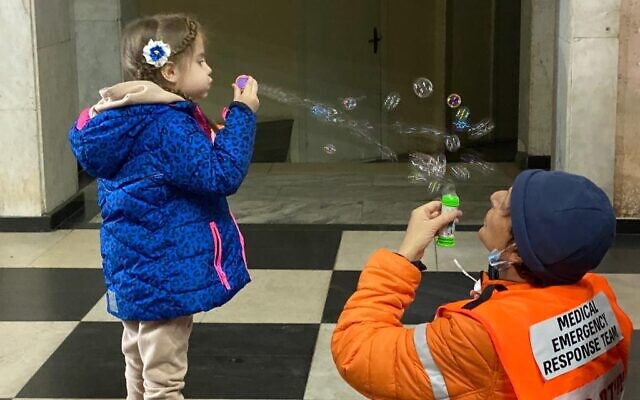 Throughout her Eastern European stay, Shames carried her punching bags, inviting passersby to use them. She said the easy-to-clean foam-filled vinyl-covered blocks are another tool she uses when promoting empowerment or teaching therapeutic martial arts.

Bringing punching bags to the border was memorable, but so, too, was marking Shabbat, Shames said.

One day after she and the other volunteers arrived, the group was joined by representatives of the Joint Distribution Committee and the Israeli consulate for a Friday evening candle-lighting ceremony complete with tea lights and a yahrzeit candle.

Shames said it was odd to welcome Shabbat with a memorial flame, but decided to do so because not only were there “plenty of people to mourn,” but “you want to bring as much light as you can.”

After welcoming Shabbat, Shames continued helping refugees. Doing so was a chance to impart lessons she learned in Pittsburgh decades earlier, she explained.

“The spirit of community that we received from living in Pittsburgh we brought with us,” Shames said. “Everybody I know who has come to Israel is deeply involved in their various communities — in Rehovot, or Bet Shemesh or Raanana — and we all have a deep love for our Pittsburgh community…This was an opportunity to step beyond that and bring some of that richness to another society who needed it.” PJC