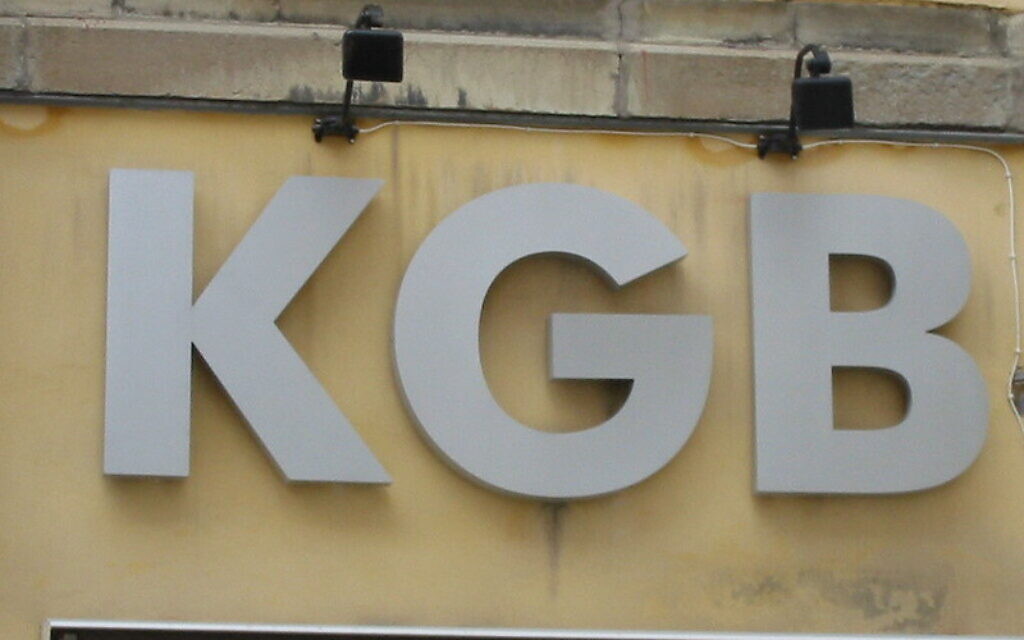 This article first appeared in the Forward. Sign up here to get the latest stories from the Forward delivered to you each morning.

The KGB men who took me into custody in Ukraine were straight out of central casting.

The Bad Cop was older, with a porcine face. He wore a leather trench coat cinched tight to his fat frame, and spoke only Russian. The Good Cop was young and lean: Bobby Kennedy to J. Edgar Hoover. His cloth overcoat was unbuttoned, Lenin style, and he had loosened his tie. He spoke fluid English and offered me an old-style Russian cigarette, which was an inch of acrid tobacco at the tip of a cardboard tube.

This was almost a lifetime ago — my lifetime.

It was September 1970, and I was fresh out of college, starting a year of foreign travel to explore my Jewish roots on a fellowship from the Thomas J. Watson Foundation. I probably was the first of what became a flood of Jewish-American Boomers to make such a pilgrimage to Ukraine.

With no permission to do so, I’d driven my VW bus an hour south of Kyiv to the historic city of Bila Tserkva, which had been predominantly Jewish in the 19th century. I wanted to get a sense of the place where my ancestors had lived for many generations before fleeing to America during an infamous series of pogroms in 1905.

So, I just drove there — and the KGB found me and picked me up. The curator of the city museum had reported me, and the two agents took me to a small office inside that building to start their interrogation.

“What are you doing here?” Bobby asked.

I didn’t want to say much. “My grandmother was born here,” I said. “She and her parents went to America.”

Bobby looked at me intently. “When was that?” he asked.

A glimmer of comprehension crossed his face. The two conferred. “You have no business here,” Bobby said. “I will now prepare a statement. You will sign it.” He did, and I did.

I didn’t know what it said. I didn’t ask. All I wanted was my freedom.

They sent me on to Odessa.

I’m humbled and embarrassed now by my timidity all those years ago, as Ukraine has become the deadly center of world conflict; as its brave citizens fight not just for their freedom but their very lives: and as they are led and inspired by a heroic Ukrainian Jew, Volodymyr Zelenskyy, who bears a vague resemblance to my own son.

History moves in circles. The ancestors of millions of us American Jews trace at least a few centuries of their wanderings after the destruction of the Second Temple to the old Pale of Settlement. Now we and the whole world have been drawn back to the Ukrainian heartland of that long-troubled region, then as now buffeted by Russia’s wars with other great powers.

My 1970 trip, and later visits in more recent years, gave me a faint sense of why my ancestors fled Ukraine. They yearned to escape capricious power and control their own destiny. But those trips also gave me a sense of why my grandmother spoke of the place in a wistful way at times. It is a beautiful landscape, full of passionate people who know and love their long history; who love the land and who, like the Jews, suffered enormous loss and terror.

I am not naive. Though my family was fairly prosperous there, they were forever at the mercy of Polish nobles, Russian bureaucrats or sword-wielding Cossacks. Read Isaac Babel, the 20th-century journalist and playwright from Odessa, and you get the resignation, cynicism and despair that Jews often feel there.

Most of the 1 million Soviet Jews killed during the Holocaust were from Ukraine. In Bila Tserkva in 1941, the local citizens took part in an especially heinous episode: the shooting of 100 wailing Jewish children in a forest outside the city.

Still, I found something comforting and even noble about Ukraine and Ukrainians. They could be proud of their Jewish culture, which includes Sholem Aleichem, who lived in Bila Tserkva for years, and the flood of Jewish classical musicians produced in the conservatories of Odessa.

The fabled agricultural countryside is astonishing. As I drove across much of it, its coal-black soil glistened in the sun like diamonds. The thatched huts dotting the landscape were painted a pale blue that matched the sky.

And like the Jews, all Ukrainians were subjected to genocide: Stalin’s vindictive, paranoid, deliberate starvation of 4 million of them during the agricultural upheaval and famine of 1932-33, the Holodomor.

Now Ukrainians are facing another disaster at the hands of Russia. Supporting them is more than an act of nostalgia. Vladimir Putin is a bloodthirsty liar with the gall to depict as “Nazis” a democratically-elected Ukrainian government led by a Jewish president. His bloodthirsty nationalism echoes the racism that led czars to create the Pale in the first place: Jews could only live among other inferior peoples in inferior places, such as Ukraine, lest they defile Mother Russia.

When I began my travels in Ukraine, one of the first people I met was a young medical student in Lviv. He had been sent by the authorities to check me out. He must have been regarded as a trustworthy member of the Communist Party, but he strayed from the official line to passionately explain that his identity as a Ukrainian was paramount and that Ukraine was and always would be its own country with its own language and heroes.

The next day, my minder brought me a slim volume of poems by Taras Shevchenko, the national poet of Ukraine. He read aloud from the most famous, which concludes:

Water your freedom
with the blood of oppressors.
And then remember me
with gentle whispers
and kind words
in the great family
of the newly free.

We Jews were and are part of that family, especially now. PJC

Howard Fineman, a longtime D.C.-based reporter and TV news analyst, is contributing correspondent for RealClearPolitics.com and author of “The Thirteen American Arguments.” He is originally from Pittsburgh and wrote the Teen Scene column for the Chronicle from 1965-1966.