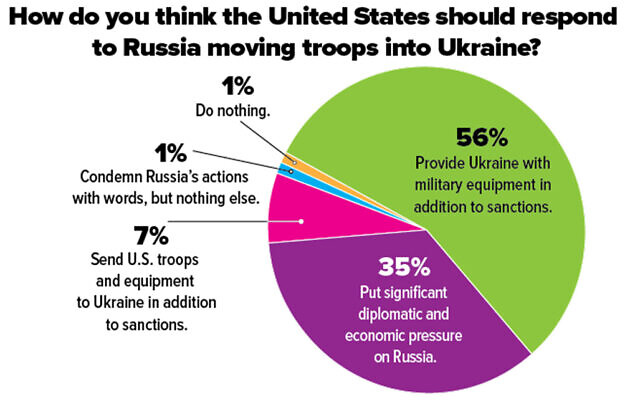 Last week, the Chronicle asked its readers in an electronic poll the following question: “How do you think the United States should respond to Russia moving troops into Ukraine?” Of the 203 people who responded, 56% said, “Provide Ukraine with military equipment in addition to sanctions,” and 35% said, “Put significant diplomatic and economic pressure on Russia.” Seven percent said, “Send U.S. troops and equipment to Ukraine in addition to sanctions. Forty-five people submitted comments. A few follow.

I desperately do NOT want another war in my lifetime. Neither do I want Russia to rule or control the rest of the world. I think we need to continue to support NATO and increase the sanctions imposed. Former President Trump’s most recent criticism of President Biden proves had he won a second term (God forbid) Putin would have continued to control Trump — and our country.

Show the free world that America is here for them. Demonstrate it with strength and also kindness to refugees.

Putin is evil. And so is Xi in China. Look out Taiwan.

I hope the Jewish Federation will send financial support to Jews in Ukraine. I also hope that that Jewish Family and Children’s Services will assist any Ukrainian Jews who may seek refugee status in the USA. (depending on how this crisis evolves).

We promised to support them when they agreed to give up their nuclear arms. We need to honor our promises.

U.S. troops should be deployed only as part of NATO.

This is happening because America is projecting weakness. We need to send arms to Ukraine and possible military trainers, just like we did against the Soviets in Afghanistan.

Putin is like other dictators; he will push the limit until others respond strongly. The U.S. and allies must respond decisively and not just diplomatically, otherwise he will keep taking more and more of the Ukraine, and then move on the Baltic states if he is allowed.

The U.S. should help in giving aid, especially food and other much needed items, but I’m not certain about getting involved with sending our troops — but then we can’t just allow these people to get slaughtered. It’s a very tough decision.

We don’t need to help other countries. We need to concentrate on our own country.

Despite being a person of non-violence, Ukraine and her people face a true bully in Putin. Bullies do not negotiate, they only take advantage of the weakness in others. Putin will take as much as the world allows. He fashions himself a modern-day tsar, and must be met with a unity of commitment to securing all sovereign nations in his midst.

Scary, scary! I think sending military equipment would be helpful and good, but I’m afraid it might be taken as the USA being an active participant and therefore being retaliated in kind. No thank you.

I’d like to see our technology companies get together and help the government figure out how to fight Putin with the kind of cyber war he often launches. I oppose sending in people to be killed, but anything we can do to stop him by crippling Russia’s electronic infrastructure would be excellent. PJC