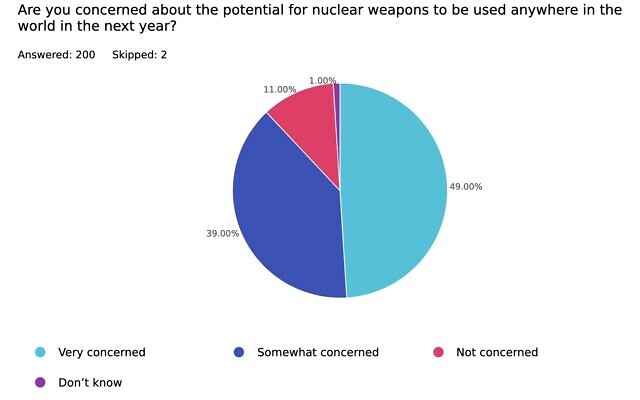 Last week, the Chronicle asked its readers in an electronic poll the following question: “Are you concerned about the potential for nuclear weapons to be used anywhere in the world in the next year?” Of the 202 people who responded, 49% said, “Very concerned” and 39% said “Somewhat concerned.” Just 11% said they were not concerned. Forty-one people submitted comments. A few follow.

With nuclear armed tyrants like Putin and Kim Jong-un, there is reason for concern.

Whatever will be, will be! Don’t worry about things that are out of your control. Just react to them in the best way possible.

I clearly remember back in the “middle ages,” when we were in grade school and used to have drills where we’d go into the school hall and sit on that hard floor with our heads between our knees, terrified! It was scary then and it’s scary now. And it’s the same enemy!

The elites who run the governments of the various countries of the world won’t be inconvenienced or have their lifestyles limited by nuclear war.

Too much saber rattling. North Korea, Russia, China are eager to start a big war.

This man has been a murderer and war criminal his entire life. He has shot down passenger planes, and killed women and children. He has NO honor.

U.S. leadership is weak within the U.S., let alone the world. The far left is out of control and leadership is too busy placating them. We were asleep at the switch with the pull-out from Afghanistan and haven’t done enough to help defend Ukraine. Domestic energy policies have further weakened the U.S. The U.S. electric grid is in poor shape and an attack would lead to millions of Americans deaths.

I think Putin is bluffing. Even with the new hypersonic weapons China and Russia have, and even though ours are not up and running yet as far as I know, Russia would still be pulverized and he knows it.

Nuclear non-proliferation should be part of the political discussion … especially now. PJC