Natalya Shisman is sitting by her phone. For weeks now, it hasn’t stopped beeping, buzzing, ringing and chiming.

Those trying to reach Shisman, a service coordinator at Jewish Family and Community Services, want everything from predictions about when Russia’s war against Ukraine will end to instructions about crossing international borders.

Shisman told the Chronicle that she doesn’t have many answers, but that the alerts and calls keep coming.

The steady stream of contact from friends, family, colleagues and community members has evidenced a collective desire to aid Ukrainians, but it’s also made apparent, she said, that people want to know when the refugees are coming.

Since Feb. 24, more than 2 million people have fled Ukraine — 1.4 million have entered Poland, 214,000 have gone to Hungary, and another 165,000 went to Slovakia. The United Nations reports that as many as 4 million could exit Ukraine as the situation unfolds.

Pittsburghers keep telling Shisman that they’re ready to help. Shisman similarly said that JFCS is developing a plan to welcome Ukrainians, and that, when the time comes, she has “no doubt” community members will do what they can to help new arrivals.

The sentiments and efforts are commendable, attorneys and immigration experts told the Chronicle, but the reality is that Ukrainians aren’t coming to Pittsburgh anytime soon.

It doesn’t matter whether people are willing to open their homes to orphans and families or whether Pittsburghers see this as another chance to aid Soviet Jewry. The truth, explained Cathryn Miller-Wilson, executive director of HIAS Pennsylvania, is that there’s “no American process that is appropriately responsive to the current and immediate needs of Ukrainians.” 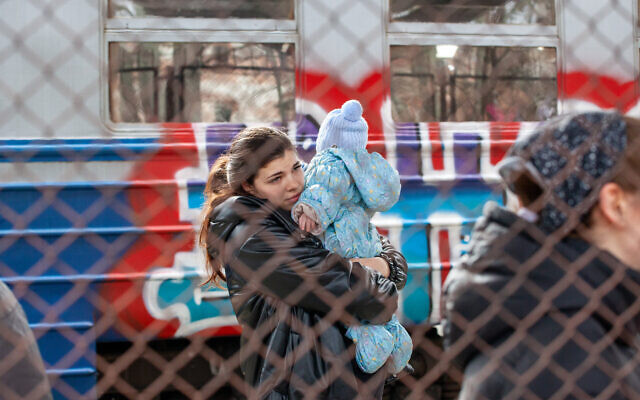 A helpful means for understanding how Ukrainians could enter the U.S. is imagining three groups, the attorney and HIAS staffer said.

The first group is people who are in the U.S. and have permanent residency, green cards or are naturalized citizens. Those individuals are permitted by American immigration law to petition for immediate relatives, such as spouses, minor unmarried children, parents, and, in some situations, siblings who are in Ukraine, Miller-Wilson said.

The second group of Ukrainians to consider are people in the U.S. on a temporary visa — individuals who came here to visit and intended to go home but now can’t. Members of the second group are eligible for Temporary Protected Status, which enables them to stay here for 18 months and to have work authorization. What TPS doesn’t ensure, though, is a pathway to citizenship or an ability to petition for immediate relatives, Miller-Wilson said.

The third category of Ukrainians are the nearly 2 million people fleeing and seeking safety elsewhere. At some point, the U.S. may declare this group “refugees” according to American law. When that happens, and the U.S. sees them as meeting certain requirements — including that they’re people of special humanitarian concern to the U.S. and can demonstrate that they were persecuted or fear persecution due to race, religion, nationality, political opinion or membership in a particular social group — then those Ukrainians, who’ve already been welcomed into neighboring European countries, will be permitted to be resettled in the U.S. But that’s also only after completing U.S. vetting procedures, which include an eight-step process that can take almost a decade, Miller-Wilson said.

The only other legal mechanism for bringing Ukrainians here is the Lautenberg Amendment, which was enacted in 1990 and allows members of religious minorities who have been historically persecuted to enter the U.S. Shisman said that since January 1990, JFCS has “resettled three people from Ukraine and 17 from Russia” via Lautenberg.

The problem with relying on Lautenberg, said Miller-Willson, is that apart from the fact that Congress hasn’t yet reauthorized Lautenberg for 2022, there’s also the time element, as those applying through Lautenberg can wait two to three years for processing.

People need to understand that “our policies are backwards,” she said. The bottom line is that “our immigration laws, from the very first, have been about, and continue to be about, exclusion rather than welcome.” 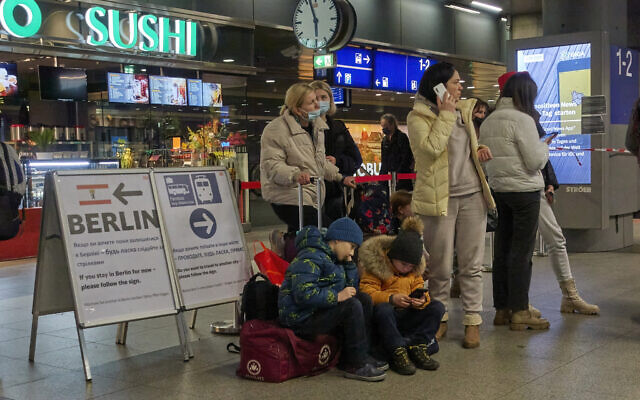 Cheryl David, a New York-based immigration attorney, told the Chronicle that in the past week she fielded calls from people in the U.S. whose Ukrainian families have made their way to Poland, Czech Republic and Bulgaria.

“People are freaking out,” David said. “They want to get their family here, but I tell them there’s no fast process to get here other than a visitor's visa.”

“People think our immigration process is humane, robust and takes situations like a war into consideration, but it does not,” she said.

Freeman is particularly sensitive to the current conflict and related legal constraints. She came to the U.S. from Odessa, Ukraine in 1993 via the Lautenberg Amendment.

“Everyone thinks that Ukrainian citizens can get here like we did. The Lautenberg Amendment is no longer a part of the appropriations bill – that is what helped us come here because it documented that Jews from the former Soviet Union were persecuted as a group,” Freeman said.

Both Freeman and David are bothered by the lack of attention those matters are receiving.

“People assume there is a refugee process for Ukrainians escaping the war to come to the U.S., but there is not and the media needs to start talking about this in order to pressure the administration to help those abroad,” David said.

Freeman encouraged people to contact their congressional representatives both about reauthorizing the Lautenberg Amendment and addressing immigration reform in general.

What’s happening now, both at the U.S. Consulates and at the Mexican border, is reminiscent, Freeman said, of what transpired more than 80 years ago when Europeans fled, the U.S. turned them away and American Jewry said “Never again.”

In May 1939, the St. Louis, a transatlantic liner, sailed from Hamburg, Germany, to Havana, Cuba, with 937 passengers — almost all Jews who were fleeing Nazi Germany. After the Cuban government refused to allow the St. Louis to land, and the U.S. and Canada refused to admit the passengers, the St. Louis returned to western Europe. Great Britain accepted 288 of its passengers; the Netherlands took 181; Belgium received 214; 224 took “temporary refuge” in France. Ultimately, 254 of the St. Louis’ passengers were killed in the Holocaust, according to the United States Holocaust Memorial Museum.

“It’s the same thing,” agreed Miller-Wilson. “People are fleeing and Europe is saying, ‘Come to us.’ We're not saying that.” PJC