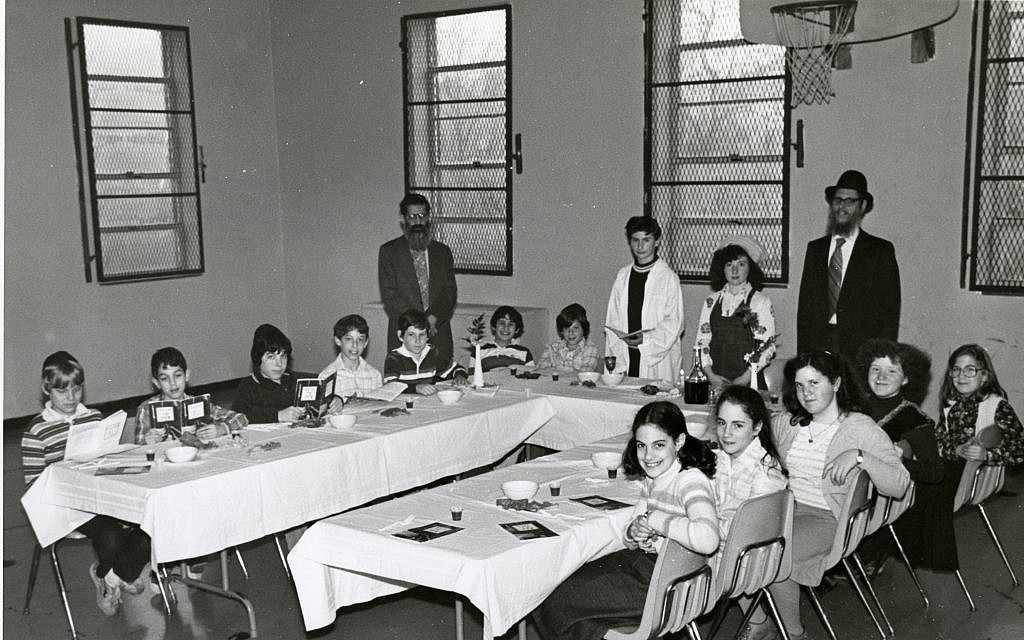 Children from the former Soviet Union celebrate a model seder with teachers from Hillel Academy in 1979. Andrew Silow-Carroll argues Jewish organizations may need to pivot to assist Ukraine Jews, as they did in the former-Soviet Union. (Photo provided by Heinz History Center)

For the past 20 years or so, I could write confidently that the Jewish community was in a “post-rescue” era. Following the exodus of Soviet Jews and the airlifts of Ethiopian Jews, Jewish organizations had to adjust to a reality — perhaps the first in Jewish history — of a world in which there were no captive Jewish communities. HIAS, founded to resettle Jewish refugees, pivoted to help other displaced communities leave their beleaguered homelands and settle elsewhere (and this weekend urged Jews to observe a Refugee Shabbat 2022).

As a result, much of the communal energy — fundraising, activism, political lobbying — was directed to other issues, including defense of Israel, anti-antisemitism, “tikkun olam” (that is, support for universal causes) and, crucially, “continuity,” the catch-all phrase describing efforts to slow the pace of assimilation and waning Jewish literacy.

One of the shocks of Russia’s war on Ukraine, on top of the kind of aggression we haven’t seen in Europe since the end of World War II, is the realization that once again Jews are in harm’s way or on the run. I’m not saying that this is a crisis specific to Jews, who are a fraction of the 1 million Ukrainian refugees flooding into neighboring countries. For all the ugly echoes of Putin’s war, this isn’t a replay of World War II.

But this crisis will be remembered for the way it has put Jewish organizations — including Jewish media — back on rescue footing, calling on muscle memory that hasn’t been flexed in decades. JTA’s Ron Kampeas reports on how HIAS, the Jewish federations movement and others “pivoted within a day of the invasion to assist Jews and others in Ukraine.” Jacob Judah reports from Moldova about the Jews finding refuge in Chisinau’s synagogues and community centers. Karyn Gershon, head of Project Kesher, described in a JTA essay how a feminist organization that empowers Jewish women in Ukraine is now organizing a sort of Jewish Home Guard, with its volunteers collecting medical supplies, food, diapers and cash.

I thought about this shift when I spoke last week with principals from RSJ Moishe House, the Russian-speaking division of one of those “continuity” initiatives launched in the past 20 years. Moishe Houses offer subsidized rent in apartments for young Jews; in return, residents agree to hold Jewish programming for their peers. There are 30 Russian-speaking Moishe Houses around the world, including four in Ukraine.

I spoke via Zoom with Yana Tolmacheva, senior director of RSJ programming, who is in New York, and Yulia Bezrukova, an RSJ Jewish educator usually based in Kyiv but currently in Prague (we’ll get to that). I thought I might learn about Jewish life in Ukraine; I did, but I also learned how an organization set up to help young people create a Jewish community found itself, in the space of a week, in a very different business.

Three or four Jewish young people live in each of Ukraine’s Moishe Houses, in Kyiv, Odessa, Dnipro and Kharkiv. The residents represent the youngest generation of adult Jews to have emerged in a post-Soviet era. As Yana explained, they include people who were raised Jewish and were “active from the start,” some who might have one Jewish grandparent or some with two Jewish parents who seldom talked about being Jewish.

“They’re not so different from Moishe House residents even in the States as well,” said Yana. “From home they feel the sense of identity and pride, but haven’t always grown up with observance or the literacy of it.”

That was the experience of Michael, 30, who recently became a community manager overseeing Moishe Houses in Ukraine and other countries in RSJ Moishe House’s orbit (and who asked that his last name not be used). “I first learned about my Jewish roots while studying at school when my mom decided to change our last name to a totally Russian one,” he wrote in an email. “But all the parents and kids in the class knew that I was Jewish and bullied me almost every day until ninth grade.”

When he got to university, he said, “I was super proud of my Jewishness and wanted to showcase it and wanted everybody to know that I was Jewish. After 2010, it felt cool to be Jewish, people were [drawing] up docs to certify their Jewish roots and move to Israel. People in Ukraine are fond of Jews and consider them smart and want to hang out with them.”

In 2012, he went on a Birthright trip with Hillel Kyiv and, he says, “my Jewish life started.” Nine years later, after living abroad, he went to work for Moishe House.

The typical Moishe House activity night be a night of Jewish learning, a singalong or a Shabbat meal, with an assist from Yulia and other Moishe House staff. But in the past two months, with the Russian buildup on Ukraine’s borders, “everything just flipped.”

Now the organization has a new mission, which Yana compares to Abraham Maslow’s hierarchy of needs: “Do you have shelter? Are you safe? Do you have supplies? And those that have the energy and the ability and the capacity, [can they] do more to be active and to volunteer for others?”

Moishe House is committed to covering the full rent of the apartments whether the residents are living there or not. They’re providing emergency stipends for staff, alumni and residents so they can purchase food and supplies. They are helping to cover relocation costs. All are functions from a different era, when literal survival — not “Jewish identity-building” — was number one on the Jewish communal hierarchy of needs.

(When we spoke last week, Yana said “everyone is safe and accounted for.” Kyiv’s Moishe House even held a havdalah hangout for anyone who needed a break from the tension.)

Yulia herself experienced the kind of displacement that was unthinkable just two weeks ago but is already becoming a media trope. When Putin started massing troops on Ukraine’s borders, Yulia thought it wise to leave Kyiv for her hometown of Uzhhorod in Ukraine’s far west. She thought at most it might be a “vacation” with her parents and friends. Even after Putin declared two breakaway regions in eastern Ukraine “independent,” Yulia and others were hoping there’d be a diplomatic solution.

Such hopes died on Feb. 24, with Russia’s invasion, and Yulia felt it was time to leave. She ended up crossing the border into Hungary on foot (to avoid the traffic jams at the vehicle crossing) and eventually making her way to Prague.

Yulia talks about the experience, reminiscent of so many Jewish journeys from the not-so-distant past, with lessons drawn from that past. “I left because I remember my own ancestors didn’t have the choice of leaving. And others are staying because their relatives didn’t have the choice of leaving. And the beautiful thing is — if I can say beautiful in such a situation — is that both decisions are absolutely correct.”

I asked Yana if anything about Moishe House’s usual work prepared her for this moment. Her answer connected the dots of so much of Jewish experience, which perpetually swivels between safety and insecurity, renewal and rescue.

“We’re in the business of community-building,” she said. “Even though that’s not our direct mission, right? We’re not a humanitarian aid organization. But our model is what allowed us to act like this. We have the networks, we have the connection, we have the communication channels. The operational systems in place, the relationships are in place. And it was all hands on deck.” PJC

Andrew Silow-Carroll is editor in chief of The New York Jewish Week and senior editor of the Jewish Telegraphic Agency where this first appeared.