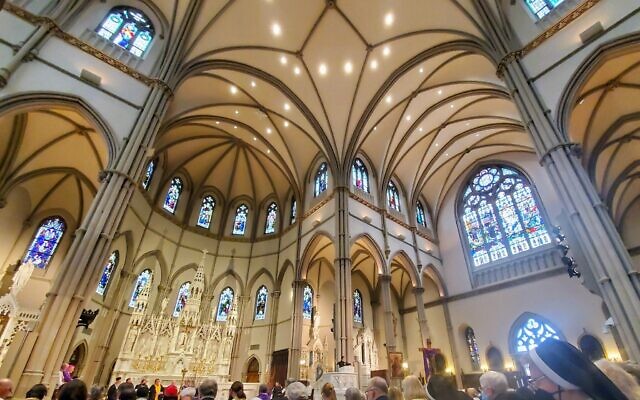 Several hundred people gathered at Saint Paul Cathedral in Oakland on March 6 as Western Pennsylvanian faith leaders implored people of all religions to pray for peace in Ukraine.

This isn’t the first time Pittsburghers of diverse religions have joined together in prayer, Zubik said, recalling that during the 2009 G20 Pittsburgh summit, “people of all faiths throughout Southwest Pennsylvania” congregated and prayed for world leaders who were meeting nearby at the nearby David L. Lawrence Convention Center.

“We prayed for peace and a peaceful air continued,” Zubik said.

More than a decade later, Pittsburghers find themselves in another moment requiring communal prayer, Zubik explained.

“Today, we come together as a people who in a more critical time pray for world peace in the face of madness that seeks to annihilate a nation, to pray for world leaders that they may have the courage to reverse the weapons of war, and we pray for each other that our deep desire for peace may be evident not only in our prayer here but in that spirit we take with us when we leave this place,” he said.

“Nations rage. Kingdoms topple. At the sound of God’s thunder, the earth dissolves. God, the Lord of hosts, is with us, the God of Jacob is our haven,” Fellman said, reciting Psalm 46.

“We pray that God may quickly cease the spilling of blood of friend and foe alike, yet stir many to bravely struggle for that true justice which alone can bring lasting peace,” Adelson said.

State Rep. Dan Frankel (D-District 23) attended the nearly hour-long gathering, and said he hopes “our prayers today are for peace and for a resolution that allows the Ukrainian people to return to their homeland, to have sovereignty over their future and work as a member of the world community, and to defeat the totalitarianism and hatred that is totally unjustified by this act by Vladimir Putin.”

Fellman called the conflict “a war that makes no sense,” in an interview following the service.

“This isn't the Russian people. This is one madman who is wreaking havoc, and it's painful to have to come together and to deal with that,” he said. “But it is extraordinary to be with people of faith from all walks of life, from all faiths, from all traditions, recognizing that we share the value of peace.”

The coalescence of so many diverse groups supporting Ukraine is “incredible,” said Laura Cherner, director of the Jewish Federation of Greater Pittsburgh’s Community Relations Council, who attended the March 6 service and has followed other related events throughout Pittsburgh.

“I think coming from different faiths, traditions or backgrounds, a lot of us have our own area where we can make an impact, and it's always nice to see everyone come together.” 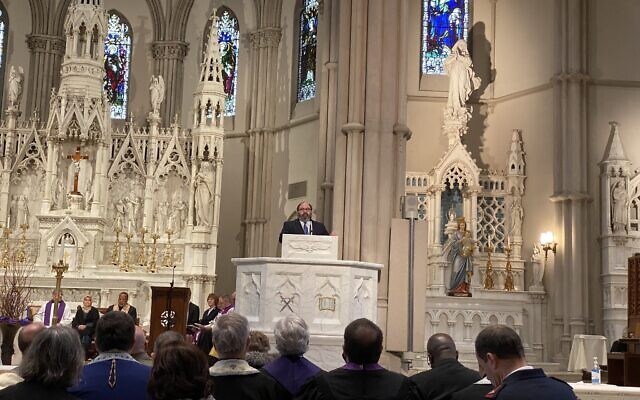 Squirrel Hill resident Faina Linkov said she’s “proud” to be in Pittsburgh where “we have so many people who are supportive of Ukraine.”

Linkov, 42, was born in Ukraine and lived there until age 16 when she moved to Pittsburgh.

Many of her family and friends remain in Ukraine. Linkov recently has been in contact with as many people there as she can, but it’s been “sporadic.”

The situation is even more complex, Linkov said, because she has loved ones in Russia as well.

“The situation is highly problematic for everybody,” she said. “Of course, in Ukraine they're concerned for their safety, for what the future holds for them. People in Russia are really concerned about where their country is heading and also what will happen with their assets because of the different sanctions against Russia.”

Linkov described the plight of an older Russian relative, who before the conflict was hoping to sell her real estate and retire to Israel.

“It's not like she can wait for 20 years for the Russian economy to rebound,” Linkov said. “The ruble is falling. It's hard to tell if the prices of real estate will go up anytime soon.”

It’s concerning, Linkov said, that many of the Russian soldiers are “18-year-old kids who did not make a decision to join the war. They're kids who were, many times, drafted against their will because their family was not wealthy enough to pay the bribe so that they would not be drafted.”

The situation in Ukraine is “heartbreaking,” Linkov said, “and it’s clear to me that people are suffering on all sides.”

Natalya Shisman, a service coordinator at JFCS, agreed, saying, “there are a lot of people who are struggling.”

Shisman, 37, who was born in Ukraine and came to Pittsburgh when she was 5, said she’s been reaching out to Ukrainian and Russian friends in Pittsburgh and getting together when possible.

The first thing everyone does is hug, Shisman said.

What comes next are questions — most of which remain unanswerable.

Shisman said it’s hard to spend more than 15 minutes at a time watching the news, and that throughout the day she often speaks with her mother, Marsha Shisman, a former Jewish Healthcare Foundation staffer, about the situation.

Natalya Shisman said her mother, who lives in Pittsburgh, is in contact with many friends and family members in Ukraine. It’s painful for her mother and others who spent years living in Ukraine to see scenes of ravaged streets or bombed-out buildings.

“They know all the images that are in the media, they know it like the back of their hand,” Shisman said.

People in Pittsburgh, and elsewhere, are looking for ways to help, and although many have donated to charities, there’s another way to express support, Shisman said.

“The Ukrainian people are everywhere — they can be your neighbor, they can be your hairdresser — if you know someone who is Ukrainian, just offer them the ability, or space, to discuss their thoughts and their emotions,” Shisman said. “They are having a hard time.” PJC