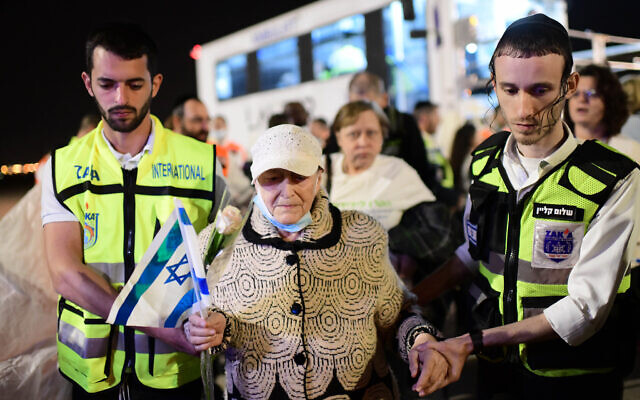 An estimated 300 to 500 Holocaust survivors have now taken refuge in Israel since the start of the war in Ukraine on Feb. 24.

“I never thought that this is what would happen again — that at my age I would have to again flee a war and again hear the sounds of bombs going off around me,” said Ninel Zhilinska, an 88-year-old survivor on the flight, according to The Times of Israel. “I was a refugee in 1941 and now I’ve become a refugee again.”

The flights, reportedly carrying 21 survivors in total, were organized by the International Fellowship of Christians and Jews. Previous flights bringing survivors to Israel have been organized by organizations including the Jewish Agency, a quasi-governmental nonprofit that facilitates immigration to Israel, and Zaka, an Israeli NGO that rescues people from emergency zones.

Multiple survivors of Nazi atrocities during World War II have died amid Russia’s onslaught, including Vanda Semyonovna Obiedkova, who died on April 4 while sheltering in a basement near her home in Mariupol.

The final plane carrying survivors on Wednesday night departed from Moldova, and the passengers were greeted by Israel’s Immigration Minister Pnina Tamano-Shata at Ben Gurion Airport.

“It is symbolic. During the Holocaust, they didn’t have a place to run. Today, there is a strong Jewish home,” she said. PJC