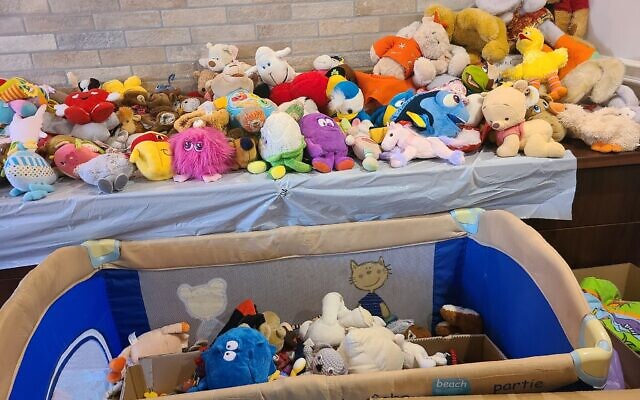 Teddy bears and other toys donated for displaced children arriving in Lublin, Poland from the Ukraine. Photo by Jeff Finkelstein.

Jeff Finkelstein recently returned from Poland, where he witnessed firsthand the devastation caused by Russia’s invasion of Ukraine.

Finkelstein, president and CEO of the Jewish Federation of Greater Pittsburgh, and David Sufrin, the Federation’s board chair, spent nearly 30 hours in Poland on a trip organized by the Jewish Federations of North America. While there, they saw the work of international partners, including the Jewish Agency for Israel (JAFI) and the Jewish Distribution Committee (JCD). They made stops in both Warsaw, a Pittsburgh Federation sister city, and Lublin.

The Warsaw Marriot, the hotel where Finkelstein was staying, was directly across the street from the central train station. Many of the displaced Ukrainians who enter the city by train are women and children; men between the ages of 18 and 60 are forbidden from leaving Ukraine, which has been under martial law since the start of the Russian invasion, Finkelstein said.
Relief organizations set up tents outside the train station to provide relief — everything from personal care items like diapers and toothpaste to hot food.

On the second floor of the station, Finkelstein saw Ukrainians waiting with what little luggage they carried — usually only a bag or two. He said he was struck by the number of child refugees and the different organizations’ attempts to comfort them.

“Volunteers were walking around and handing out lollipops and candy to the kids, trying to give them some sense of normalcy in a completely unnormal world,” Finkelstein said. “Toys were out for the kids as well.”

A few blocks from where the Finkelstein and Sufrin were staying, in another hotel’s conference rooms, JAFI had set up a processing center for those wishing to make aliyah to Israel.

There are about 200,000 Ukrainian Jews, according to Adam Hertzman, the Federation’s director of marketing. About 4,000 people have already applied to make aliyah, he said, but expects that number to rise to between 10,000-20,000 in the coming weeks.

Despite the paperwork required to relocate Ukrainian Jews, JAFI is trying to turn around applications in 48 hours, Finkelstein said.

Finkelstein and Sufrin also met with Rabbi Michael Schudrich, the chief rabbi of Poland, who stressed the need to help all Ukrainians who were suffering — not just Jews.

Finkelstein and Sufrin spent time in a former yeshiva in the city of Lublin before heading to the Polish-Ukraine border. The basement of the building, Finkelstein said, was turned into a warehouse, housing stacks of diapers and piles of clothing. He recalled seeing a pile of teddy bears, which struck him as emblematic of the needs of the displaced children and families.

“It’s very stark to see at these sites women and children and senior citizens, very few younger men — who were back in Ukraine — believing they’re going home at some point at the end of this war,” Finkelstein said.

At the border they saw “a line of humanity,” Finkelstein said, people waiting in long lines for buses that would disperse them to temporary sites throughout the country.

Groups waiting to assist the displaced were comprised of NGOs from around the world, he said.

“There was a tent of the Sikh community, and the Jehovah’s Witnesses were there,” he said. “What was really amazing, the first booth for every refugee coming across the border was an Israeli group. The Israeli flag is there.”

Finkelstein said that at a nearby shopping mall, the JDC displayed its logo, which includes the word “chesed,” the name the agency uses for welfare centers in the former Soviet Union. Because of the work formerly done by the JDC in Ukraine, when members of the Jewish community crossed the border, they already knew about the organization.

Finkelstein said that the past work done in the region by both the JDC and JAFI allowed them to begin helping immediately.

“These two organizations were able to pivot on a dime to understand the logistics and deal with the situation,” he said. “It’s the kind of thing that an organization not on the ground can’t do so quickly. It shows the reason why we give funding to these organizations from our annual campaign and why we now need to raise supplemental dollars specifically for the needs that go beyond what we’re able to find on an annual basis.”

Hertzman said that the need is immediate and great, noting that of the 200,000 Ukrainian Jews, about 40,000 are low-income and live in approximately 1,000 locations across the country.

“There’s a huge number, I think it’s around 50% of those low-income Jews, who, for one reason or another, aren’t mobile, especially seniors,” Hertzman said.

JDC, JAFI and Chabad, he said, are bringing food, water and medicine to these people, and helping them with other emergency needs, like taking them to basements during bomb attacks, he added.

United Hatzalah, Hertzman said, has already provided more than 10,000 displaced Ukrainians with medical and humanitarian aid. By mid-March the organization had served 4,000 meals, delivered 30 metric tons of aid — medical supplies, clothing, food and hygiene products — and has 55 medics on the ground.

Hertzman said there are 600,000 Ukrainians in Warsaw alone.

Pittsburghers are responding to the need, Hertzman noted. Individual community members and foundations have already donated more than $900,000. The total short-term projected need is about $23 million, he said.

“We haven’t even started thinking about what the long-term is,” he said.

Many Pittsburghers feel a deep connection to the Ukraine community, Finkelstein said.

“A lot of our families come from there,” he said. “It’s part of Pittsburgh’s nature that when Jewish communities are under attack, in any way, whatever that attack means, we step up. We’ve done it during different attacks within Israel. We step up and give above our weight class. It’s our nature as Pittsburghers.”

Donations to Federation’s Ukraine Relief Fund can be made at jewishpgh.org/support-for-ukraine. PJC