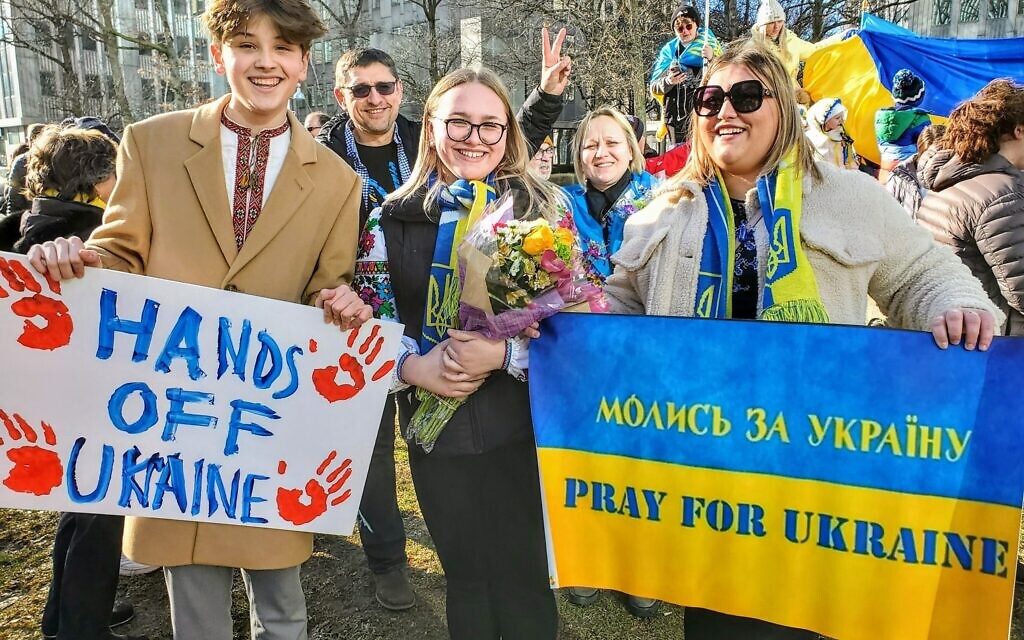 Ukraine is under attack and a humanitarian and refugee crisis is ensuing. Under the guise of liberating the disputed Donbass region of Ukraine, Russian President Vladimir Putin waged an unprovoked and all-out military assault against its peaceful neighbor to the west. Immediately following Putin’s declaration of war on Feb. 24, Russian soldiers, tanks and warplanes invaded Ukraine, striking military and civilian targets near and in the major cities of Kyiv, Kharkiv, Dnipro, Odessa and Lviv. A colleague of mine in Dnipro, who prefers to remain unnamed, said she is terrified as Russian forces bombard locations, including the airport, just outside of the city. She is preparing to flee westward.

Thousands of Ukrainians have already fled, crossing the border into Poland. Polish officials are preparing to accept up to a million or more Ukrainian refugees. The Jewish Agency is also preparing for a significant uptick in Ukrainian aliyah, and the United Nations estimates that 4 million people will be displaced in neighboring countries. Polish doctors are on high alert to provide necessary medical care for the refugee population, according to Dr. Alina Sobczak of the Jagiellonian University Medical College in Krakow. Sobczak, an emergency unit pediatrician, is working around the clock with her colleagues to house Ukrainian children and families at the pediatric hospital. Sobczak is personally hosting 10 refugees in her home, five women and five children, and she and her family are arranging housing for an additional seven refugees.

Throughout Polish civil society “there is a huge mobilization of people, to help as much as they can. They’re collecting food, blankets and other essential items basically in every other shop and kindergarten,” said Maciek Zabierowski of the Auschwitz Jewish Center in Oświęcim. Zabierowski, a Holocaust educator, is volunteering at the border to transport refugees to safety. In Krakow, the local Jewish Community Center has “opened its doors for refugees” from Ukraine, according to Rabbi Avi Baumol, the rabbinic representative of the Chief Rabbi of Poland. The mood is tense, and people are nervous, Baumol said, but the “JCC [in Krakow] is trying to do whatever they can” to help. The JCC will be providing an apartment, food, clothing and other necessities for two refugee families. The JCC in Krakow is also partnering with the mayor’s office to collect and send blankets, mattresses, diapers, hygiene products, batteries, candles, medical kits, canned food and more to Ukraine as humanitarian aid in this time of crisis.

Crises in Central and Eastern Europe are unfortunately nothing new for Jews. The upheavals of the 20th century left lasting marks on the Jewish communities of the region. Most Jews were annihilated during the Holocaust, and those who survived and remained under the Iron Curtain were largely deprived of their Jewish identities.

With the fall of Communism, the Jewish communities of Eastern Europe slowly reemerged. Ukraine is one of the shining lights. Today, depending on how Jewish identity is measured, as many as 200,000 Jews live in Ukraine, according to demographer Sergio Della Pergola. Outside of Israel and the United States, Ukraine has one of the largest Jewish populations in the world. Its embattled president, Volodymyr Zelenskyy, is Jewish. The capital city of Kyiv has a vibrant Jewish community with several active synagogues, kosher restaurants, a Jewish school, a JCC and a Hillel on campus. Smaller Jewish communities exist in numerous other Ukrainian cities, but many Jews are also terribly impoverished and live especially precarious lives — even before COVID-19 and the Russian invasion.

In the western city of Lviv — also known as Lemberg, Lwów, or Lvov depending on the period and the borders — Jewish sites of memory abound. It is also the emerging center of the Ukrainian refugee crisis, as thousands of people flood the city en route to the European Union border of Poland, just 50 miles away. I was fortunate enough to carry out fieldwork in Lviv in 2018, where I documented historic synagogues and Holocaust sites, spoke with Holocaust survivors and prayed with the small contemporary Jewish community. What will happen to this community under a Russian occupation? Who will care for its synagogues and cemeteries, and the countless others that dot former shtetlach and cityscapes if the Jews of Ukraine migrate en masse? Will Jews and their ancient patrimony survive the bombing of Ukrainian cities the likes of which have not occurred since the Second World War? It is too soon to tell, but the realities on the ground do not portend well for the stability of Jewish life. The young and those with (modest) economic resources have left or will leave in the coming days and weeks. The poor and the elderly will remain.

What Putin is doing militarily to destabilize Ukraine will have immense regional and global consequences for Jewish and non-Jewish Ukrainians alike. It is my hope that the Pittsburgh Jewish community will support Ukraine and its Jewish community in this difficult time. PJC

Jonathan Zisook, Ph.D., is a visiting lecturer in sociology at the University of Pittsburgh and a scholar of Central and Eastern European Jewry.