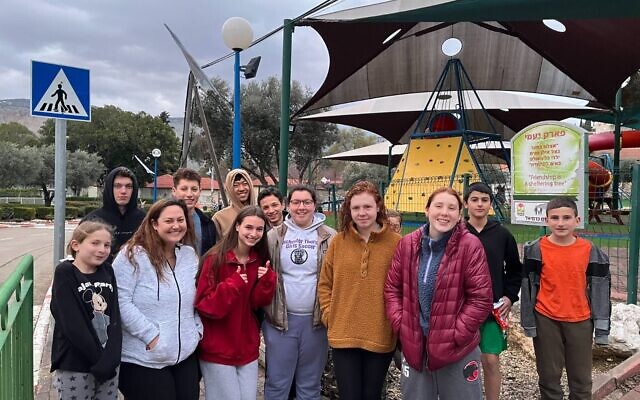 Pittsburgh and Israeli youth congregate outside a park in Israel. Photo courtesy of Tadao Tomokiyo

Educator Tsipy Gur has long known that lessons often are best learned outside a classroom. Last month, a cohort of Pittsburgh teens proved the point.

From March 13-23, eight students from Winchester Thurston School and Sewickley Academy joined Gur and Classrooms Without Borders to volunteer at Children’s Village in Israel, home to 275 youth between the ages of 5-18.

Located in Karmiel, the Children’s Village provides housing and counseling to youth who primarily come from “distressed families,” said Gur, founder and executive director of CWB, which has partnered with Children’s Village for 18 years. A decade ago Gur increased her involvement with the village by bringing Pittsburgh youth there for service-learning opportunities.

“It’s important to take kids out of their bubbles and into the world,” Gur said. “When you do this, you empower kids to think about the other and to stop thinking so much about themselves.”

Before last month’s trip, Remmie Greenwald and other members of the Pittsburgh cohort learned about the village and discovered how children are placed within foster homes; how each foster home is run by a married couple who resides there with their children and 10 children from the village; how students in the village attend school in Karmiel; and how after classes, students return to the village for tutoring and to participate in activities, including athletics, art and caring for animals at a petting zoo.

Greenwald, 17, had some preconceptions of what life would be like in a foster home with 10 other kids. The Winchester Thurston student quickly realized how wrong she was.

“We got there, and it seemed like the kids were happier than me,” Greenwald said.

Greenwald spent much of her 10-day stay in Israel volunteering at the village, but on day seven she and the other Pittsburghers got a surprise. During a trip to a nearby absorption center, the group met 13 Ukrainian teenagers and young adults who, due to Russia’s invasion, had left their homes and come to Israel.

“We’ve been through a lot but not like these kids,” Greenwald said. “Most of the kids only had one bag. Some didn’t have parents.”

As of March 29, 15,000 Ukrainian women and children had arrived in Israel, according to HIAS.

“The day before they left, they didn’t know they were going,” Tomokiyo, 15, said. “These people were completely normal people before the war started, and suddenly their lives were completely changed, and that’s just really crazy to think about.”

Tomokiyo, Greenwald and the other Pittsburghers learned more about the young Ukrainians’ plight while accompanying them on a shopping trip. With about $2,000 — donated by a western Pennsylvanian — the Pittsburgh contingent helped the 13 young Ukrainians buy socks, T-shirts and other items.

Spending time together helped Tomokiyo realize the similarities he and the Ukrainians shared.

In a blog post for CWB, Tomokiyo wrote, “As they went shopping, we got the chance to talk with some of them, and we realized that while they had endured such horrific and incredible journeys, they were still just young people like us. Some of them were eager to talk to us about their favorite sports teams. Others quickly exchanged their social media accounts.”

Suzanne Hegarty, a Winchester Thurston teacher and trip participant, said that spending time with Ukrainian and Israeli youth was enlightening.

When “you open your mind and see other cultures, you see how different other people can be but also how same they are,” she said.

Last month’s trip was Hegarty’s first time in Israel. While the visit was informative, she said, she would have liked to learn more about the Palestinian-Israeli conflict in addition to discussions they had about Israel’s portrayal in the media.

Visiting the Jewish state gave participants a chance to not only engage with Israeli and Ukrainian youth but counter what’s often presented on television and online, Gur said.

“In order to fight hate and antisemitism, you have to see what’s really happening, which we did by introducing the group to Israeli Arabs and showing them the Golan Heights and Israel’s borders,” Gur said. “When the kids saw the borders, they couldn’t believe how small Israel is.

“We were also in Israel when the terrorist attack happened in Beersheba,” she continued. “The kids felt the atmosphere in the country. They could see what people there endure … Several of the kids told me that prior to the trip they didn’t appreciate their families or what they have at home, but now suddenly they are saying ‘thank God’ for everything they have.” PJC