Khalid el-Hakim didn’t begin his museum with 10,000 artifacts depicting the vast Black experience in America. El-Hakim’s collection grew as his interests matured. Twenty-six years ago, when the former Detroit Public Schools teacher created the Black History 101 Mobile Museum, he started with items relating to Stevie Wonder, Michael Jackson, Marvin Gaye, The Temptations, Diana Ross and The Supremes. Initially, the music-first approach made sense to el-Hakim, as he grew up in Detroit and had a predilection for Motown. He quickly realized, however, that his project’s success depended on expansion.

“I understood that I had to be inclusive of voices that were representative of a wider spectrum of people,” he said. Without pieces detailing a larger story, he continued, his mobile museum would repeat mistakes that had been made by other institutions — namely, omitting important minority stories.

El-Hakim started collecting materials detailing women’s experiences and relics from the Jim Crow era and placing them alongside artifacts related to Malcolm X, Martin Luther King, Jr. and Muhammad Ali. As he studied for a doctorate in philosophy from the University of Illinois at Urbana-Champaign, el-Hakim continued to find deficiencies in his collection and attempted to bolster the significance of his work.

Black history in America isn’t a simple linear tale, el-Hakim said, so he scoured flea markets and antique shops, estate sales and auctions, to add nuance to his collection. As time went on, he amassed thousands of items ranging from newspaper covers, cassette tapes and iconic photographs to ephemera, shackles and even a slave bill of sale.

It quickly became impossible for el-Hakim to transport his collection, so in creating an exhibit or delivering a lecture — he’s doing the latter for Pittsburgh’s Classrooms Without Borders on Jan. 17, Martin Luther King Day, in partnership with the Maltz Museum of Jewish Heritage — el-Hakim began selecting a smaller portion of items related to a particular theme.

Tangible items are useful in teaching about race and racism in significant ways, el-Hakim said: There’s an aesthetic value to grouping items together, but there’s also an energy that’s experienced when being around so much history.

Transmitting that feeling became an initial challenge during the early days of the pandemic, however, as el-Hakim, like other educators, needed to quickly pivot from public spaces to virtual forums. He realized then that although his thousands of physical materials narrated a powerful story, it was the visitors to his museum, and listeners to his lectures, that carried the true weight of his mission.

“It's not just looking at artifacts but actually creating a space where discussion is an expectation of experience,” he said.

El-Hakim said he’s been working harder on partnering with others to share stories, working toward common goals and addressing some of the ills plaguing society today.

Whether the topic is race, racism or antisemitism, engaging in meaningful dialogue can open space for understanding, he said. It’s important to “have honest conversations about the misconceptions that we have about each other,” he added. 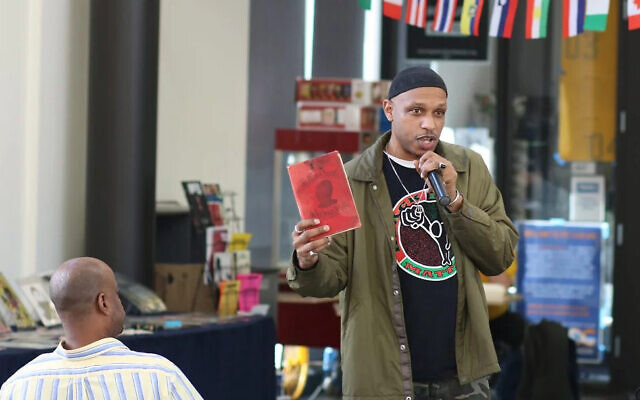 A particular error that el-Hakim has worked on correcting is the mistaken belief that all Jewish people share a similar white racial background. He mentioned friends and family raised with both authentic Jewish and Black experiences.

“If you’re in a bubble, you might not understand that,” he said.

El-Hakim shared his own story. While he had long thought that his African American father was not Jewish until he converted, during a recent conversation with his white Canadian Jewish stepmother, el-Hakim learned that wasn’t the case.

“My great-great-grandmother was from Portugal and she was Jewish, as was my great-grandmother,” el-Hakim said. “My grandmother was a spiritual person, but she didn't practice Judaism.” So when his father married his stepmother, although he converted, Judaism had already been “part of the family line for four generations.”

As a young boy, el-Hakim celebrated the High Holidays with his father. “I went to synagogue with my father and my stepmother at a young age, from 5 to maybe 13. I have vivid memories of those experiences,” he said. “I grew up with Judaism being part of my lived experience.”

El-hakim said his mother was Christian, and that in college he was introduced to Islam, which he now practices. By having rich experiences with the three Abrahamic faiths, he was exposed to different understandings of religion, he said.

El-hakim also understands some of the painful failures of faith-based communities, he said.

“We follow these certain tenets, and we have a certain belief, and are grounded in religious traditions, so we should be the best representation in terms of how we envision a world of righteousness and justice and equality, [but] all of our communities have fallen short of that in my opinion,” el-Hakim said. “The Christian, Muslim and Jewish faiths are failing miserably, miserably, when it comes to issues of race in America and the world. So I think we have a lot of work to do. I think we need to roll up our sleeves and get to work.”

Ellen Resnek, educational programs and outreach manager at Classrooms Without Borders, said el-Hakim’s project will help society “get to work,” and that the wealth of artifacts he has curated “bring light to a complex story of race and racism.”

Tsipy Gur, founder and executive director at Classrooms Without Borders, agreed, saying the George Floyd marches, and Black Lives Matter placards in people’s yards, drew considerable attention, but the “work” el-Hakim speaks of will be effectuated by fellow educators and students, who, like him, are creating space for dialogue.

“It is crucial to understand the other,” Gur said. “Not just to have signs and nice words, but to get to know each other.” True dialogue between teachers and students will enable people to “meet the other and see the similarities. And it’s when you see the other that you can work together, you can argue respectfully. But you can only see the other when you’re not afraid.” PJC