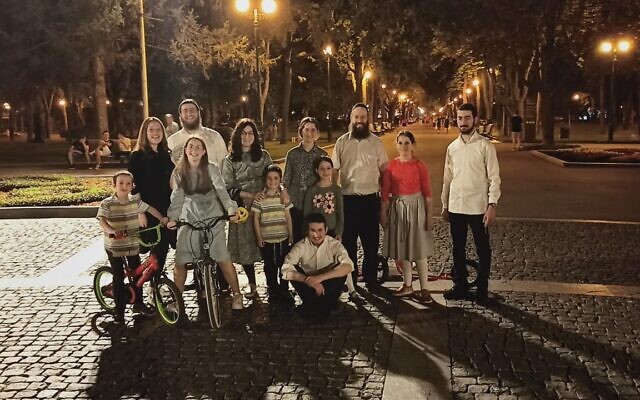 Rabbi Chaim Levinson has seen multiple transformations of Kharkov, Ukraine. He hopes to witness one more.

Levinson, a Lubavitch emissary, had called Kharkov home for 23 years, a period during which the city and its Jewish community grew immensely, he said. A week after Russia invaded Ukraine, though, Levinson and his family fled.

For five days they traveled through Ukraine, Moldova, Romania and Poland before reaching New York, whereupon entering “770” — headquarters of the Chabad-Lubavitch Hasidic movement — Levinson was greeted with song and dance.

Levinson celebrated his safe return to the states, but said he feels torn because of the Talmud’s teaching that “those on the path to performing a mitzvah aren’t susceptible to harm.”

“You don’t just drop the community and leave,” Levinson said. The challenge, he said, is that “in the beginning they were just bombing buildings and factories, but eventually they started hurting civilians. When a bomb falls a block from your house, and your house shakes, we realized it’s time for us to leave.”

Levinson was in Pittsburgh on April 10, delivering a lecture at the Lubavitch Center in honor of the Lubavitcher Rebbe’s 120th birthday.

Months ago, Ukraine was the fifth-largest Jewish community in the world. Of its nearly 400,000 Jews, 45,000 lived in Kharkov, according to the European Jewish Congress.

Tens of thousands have fled since Feb. 24, but nearly 80% of Ukraine’s Jews remain in the country, the Associated Press reported on April 13. 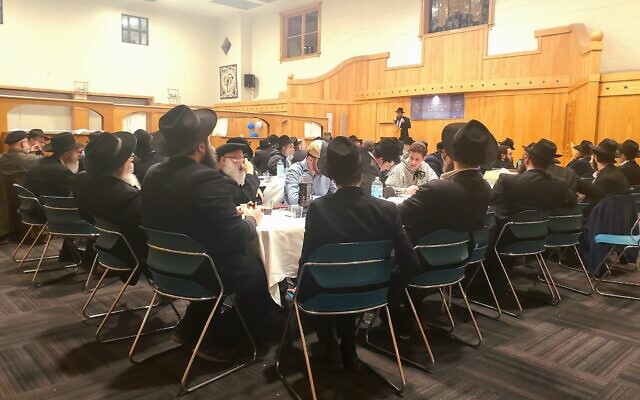 Levinson hasn’t been in Kharkov for weeks, but his work there continues. In addition to helping community members exit the country along with his family, Levinson arranges transport out of Kharkov, provides displaced people with housing, secures food and medicine and continues teaching classes over Zoom, all from an office in New York, he said.

Caring for an attacked community thousands of miles away is difficult, though. The basement of a synagogue where Levinson formerly prayed and taught is now a shelter. Nearby marketplaces are gone. Factories and houses are destroyed.

“It’s not going to be so simple to recover from that,” he said.

Levinson said he remembers arriving in Kharkov more than two decades ago. At the time, there wasn’t continuous electricity, and the newspapers would print information about when and where lights would go out.

“I used to be giving a lesson in the synagogue and my wife would be sitting with my children in the dark,” he said. “There was no music, no video, nothing. And we’d be sitting in the dark for a few hours.”

Back then, few could pay for special lighting, and many people relied on candles. Some people couldn’t even afford those, however, Levinson said. “Thank God we grew out of that, but I’m scared to think what will be after the war.”

The future is impossible to know and Levinson, a father of 10, isn’t sure when he and his family will return to Kharkov, but said he desperately wants to go home.

“My kids want to go back,” he said. “They feel that’s their place. We hope to go back and that Hashem will help.”

Divine providence is regularly on a rabbi’s mind, but the last few months have provided ample opportunities to consider God’s actions, Levinson said during his visit to Pittsburgh last week.

Whether it’s the miraculous speed with which documents are processed, or the position a bomb lands — and how many people are saved as a result — God is offering insight, Levinson said.

Levinson’s comments are a reminder that “Jews around the world are part of one family,” Rabbi Eliezer Shusterman said after the lecture.

Levinson agreed, and told the Chronicle that his appreciation for Jewish peoplehood grew while fleeing Ukraine.

Five days after leaving their homes, Levinson, his family and hundreds of other Jews arrived in Kishinev, Moldova, on a Friday. With evening approaching, Levinson wasn’t sure what to expect for Shabbat, but awaiting the refugees were volunteers and staffers from Chabad of Kishinev, who had secured housing and food not only for that group but hundreds of other refugees as well.

When Shabbat ended, before Levinson and his fellow travelers continued on, the Kharkovian leader offered to pay for the stay and services provided.

Their hosts refused any money, saying, “We don’t want to get paid for this. It’s our mitzvah,” Levinson recalled.

Hearing those words — and thinking about the efforts needed to serve Ukrainian Jewry now and in the years ahead — reminds Levinson of a parable about a cow that was unable to provide milk to its young. As awful as it was for the hungry calf, Levinson said, it’s even more painful for the mother.

“We are here in this world to provide, to do mitzvos, to help out,” he said. “And when we can help out, we feel this is our obligation. It isn’t our job. This is our instinct that requires us to do it.”

Rabbi Yisroel Rosenfeld, rabbi at the Lubavitch Center and the executive director of Chabad of Western Pennsylvania, encouraged attendees of the program to support Levinson’s work at jewishdiscovery.org/ukrainerefugees. PJC