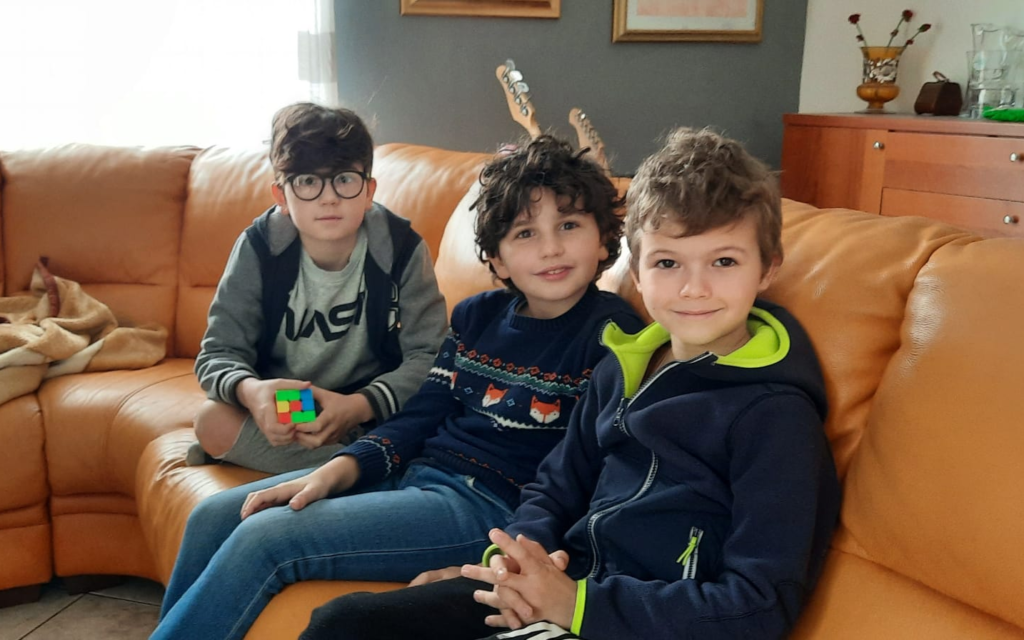 Magda M. was born in Poznan, Poland, to a Jewish family that hid their identity from Nazi persecutors. Lidia C. has Jewish roots that extend back to the Inquisition and the forced conversions in Spain that led her ancestors to observe Jewish rituals in secret.

Magda and Lidia know about desperate situations. That’s why they are an integral part of In Esther’s Name – the Ukrainian Refugee Project. These two courageous women, both mothers, both living here in Serrastretta in south Italy, are part of a small but determined committee whose members have worked to bring suffering Ukrainian women and children — Jewish, Christian and secular — to the safety and peace of our mountain village.

As rabbi of a small Reconstructionist congregation, Ner Tamid del Sud (“the Eternal Light of South Italy”), my 15 years in the “toe” of the Italian “boot,” have given me the opportunity to experience firsthand the strength of the Calabrian “b’nei anusim” and how that strength translates into direct help to those in need.

In southern Italy we have a saying, “sega la segatura,” which means “saw the sawdust,” implying that talking about a problem suffices for taking an action. For us Calabrians, “sega la segatura” doesn’t apply. From this common sense approach to difficulty, In Esther’s Name was born.

“We don’t call it Purim,” said Luciana, a synagogue member and a native Calabrian. “Here in the mountains it is called the Feast of Esther. We fast and pray that we will have the emotional strength to take action to help others.”

Which is exactly what In Esther’s Name has done. The result: Five Ukrainian mothers and their nine children have found safety and peace in our mountain village. 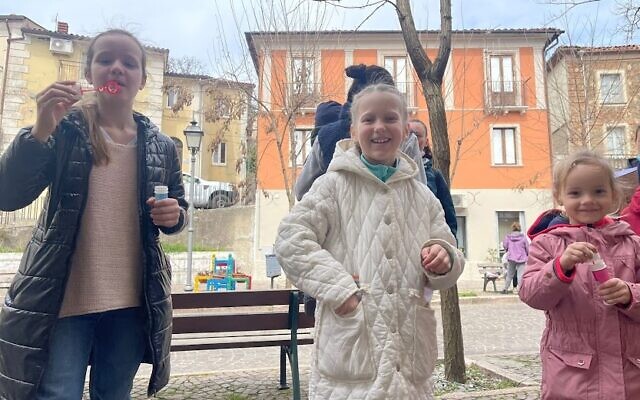 Three of the nine Ukrainian children helped by In Esther’s Name (Photo courtesy of Rabbi Barbara Aiello)
“We combined our strengths,” said Carolina, whose committee was tasked with finding housing for the families. Carolina and her husband are expert woodworkers. They create custom furniture, mostly reproducing antique styles. “We see the interior of houses every day,” said Carolina, who applied her expertise to build individual living arrangements for our refugees.

As one of the managers of our local international airport, Lidia heads the transportation and logistics committee. Lidia, along with local residents, worked around the clock to find COVID tests, flights and airline tickets for our families, while Angela, a local attorney, handled the myriad documents required of refugees by the Italian government.

Thanks to Magda, and expert teachers Giusy and Gessica, an Italian culture and language program for the children got off the ground in record time.

What have our refugees brought with them? These courageous mothers arrived with their precious children, legal documents and small backpacks with a change of clothes, a few diapers for their babies, and a trove of memories that graphically demonstrate the terror and danger they faced.

Hannah and her 9-year-old daughter Mira remember the horror of the war on Ukraine. Here’s what happened.

“We run from Kyiv to a cottage in the forest. It has only one room with no heat, water or electricity. This is our stove that was the only warm place in the house. See the bread? We dried the bread on the stove to have something to eat. We went into the woods and collected wood for the stove. We brought water from melting snow. We covered the windows with dark fabric so the planes would not see the house. So they would not shoot at us.”

And now, nearly one month later, In Esther’s Name is making a difference.

Antonio is 9 years old and was born in our mountain village of Serrastretta. His mother Magda, the granddaughter of Polish Jews who hid their identity during the Holocaust, speaks Italian, English and Polish and has been a fabulous help in creating “tranquilita`” for our refugee group.

Antonio has accompanied his mother to each refugee event and in three weeks’ time Antonio has come to know Miroslav, Olena’s 7-year-old son.

For the first three days Miroslav did not speak. Not one word. Traumatized by what he had seen and heard in their escape from Kyiv to Warsaw, his first utterance as his mother took a seat in our local restaurant, was a piercing scream.

“Mama! Mama! NO.” Miroslav was adamant that his mother should not sit near a window. Through our interpreter we learned why. Little Miroslav was terrified that “a bomb will come to break the window. The glass will fly and cut you to pieces.”

Antonio, a youngster himself, knew just what to do. Taking Miroslav by the hand, Antonio used gestures to convince Miroslav that they could play a card game together — and somehow, with neither child knowing the other’s language, they began to play.

Two weeks later the Italian boy and the boy from war-torn Ukraine continue to spend time together. When I asked Antonio how it was going, Antonio flashed a big smile and said, “Miro e’ il mio megliore amico.” Miro is my best friend.

As the future unfolds, what will our mothers and children choose to do? Each woman has a husband who is either a soldier in the Ukrainian army or an “auxiliary” who is applying his job skill to the resistance movement. Caterina, one of our refugee mothers, is the wife of a Ukrainian Orthodox priest.

It is our hope that some, maybe all, of our families will want to start a new life here in Serrastretta. If so, we will continue to raise funds to bring their husbands here to Italy to join them because we believe that the benefits will be great. Young families who will grow our synagogue will also augment the population of an Italian village whose numbers are dangerously low.

What we do know is that our committee of seven dedicated women combined skill with compassion and In Esther’s Name we made it happen. We demonstrated that indeed one person can make a world of difference. PJC