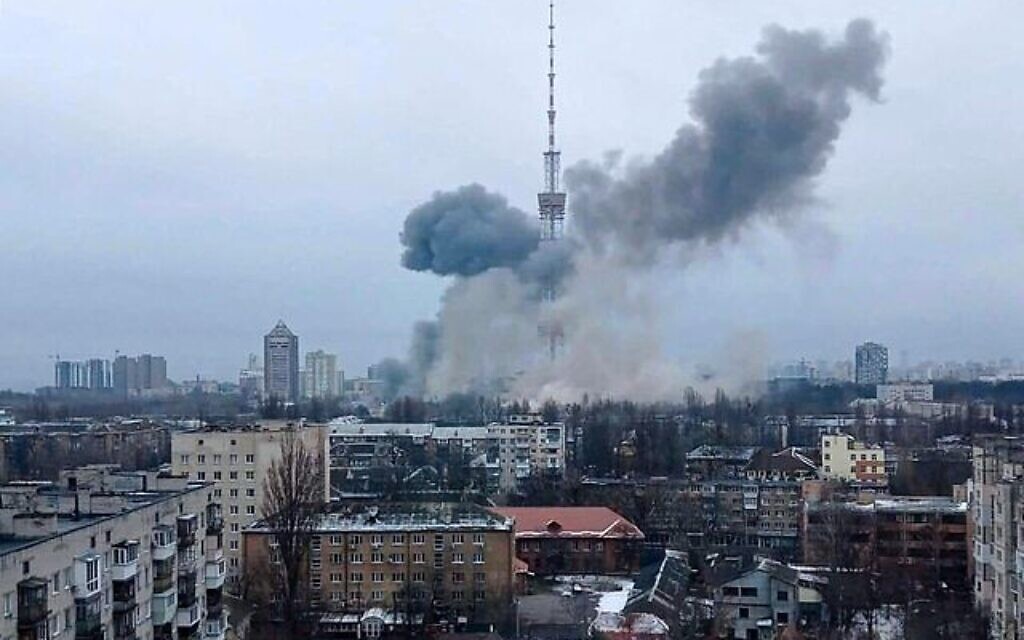 I have recently come across the translation of “black hole” in Hebrew. It’s “hor shahor,” rhyming as though it is not a chance combination of sounds. And those sounds rang sinister to me — beyond the dark meaning of the black hole concept itself. The next day, Russia invaded Ukraine.

The feeling that the term “black hole” evokes in a non-astronomer like myself is hopelessness. So does Russia’s invasion, which will forever make enemies of two nations that come from the same root of Kievan Rus, conjoined almost like Siamese twins, whose languages are often mutually intelligible. Moreover, many Ukrainians speak Russian better than ethnic Russians in Russia, if only because Russian was what the imperial Soviet Union called “the language of between-nation communication.”

My 92-year-old mother’s Russian, like my late aunt’s, both born in Kyiv, and my grandma’s, born in Chernobyl, Ukraine, has no accent. They did not end up in Babi Yar in 1941 thanks to my grandma’s foresight, and when the train they fled on was bombed and they had to continue on foot, it was a Ukrainian villager who gave them food and shelter, possibly saving them. No antisemitism on his part. Meanwhile, the similarity between the two nations has been both good and evil. Endemic as antisemitism has been in Ukraine, with its pogroms and Khmelnitsky’s massacres, so it has been in Russia. Except, of course, it’s still hard to imagine that Russia will ever elect an openly Jewish president rather than a KGB-spawned dictator.

It is not even possible to use the terms “Russians” and “Ukrainians” as denoting fully distinct entities, because, for a long time, there has been no barrier between the peoples of Russia and Ukraine. These peoples also include many ethnicities — not only ethnic Ukrainians and Russians — let alone the offspring of mixed marriages in many generations. Numerous Ukrainians and Russians live in what has now become for them enemy territories.

There is a great difference between the two countries, however. It could be because of the enormous steppes of Russia, frozen and covered with snow in winter, or because of its imperial past, which confers delusions of grandeur on people eternally suppressed by the all-powerful state. It does not matter what makes Russia, in contrast to Ukraine, a hor shahor, with no light at the end of the long dark tunnel of its history. And the best proof of that is the reactions of people in Russia to what is “not a war.” I’ll go along with Putin’s refusal to use the “W” word — but not for his demented reason: I am talking of the butchery of peaceful Ukrainians by the Russian army, and of what the people of Russia say to that. And I am not talking about the “masses,” whose opinion has never mattered to the decision-makers in Russia. This is about my classmates — graduates of the preeminent school in the Soviet Union, the Moscow State University (MSU), sort of the Harvard-cum-Yale of the USSR. It is soul-crushing how many among those who stayed in the USSR, and then Russia, bought into Moscow’s Goebbelsian fiction — so transparent it could not even be called propaganda. If their intelligence did not protect them from that, you can forget about the rest. Yes, there are demonstrations, but those mean nothing to the ghouls in Kremlin.

I have read with heartache a letter supporting Putin’s regime’s slaughter in Ukraine signed by the entire leadership of the top Russian scientific society, the Russian Academy of Sciences, including the MSU’s rector, who have thus become complicit in crimes against humanity. Not that it is the first time when supposedly high intellect has no connection with morality — the actions of German professors during the Nazi regime tell the same story. Paraphrasing Hannah Arendt, in a monstrous society, evil is banal. Then, where evil is banal, a normal human reaction becomes heroic.

Now, the opinions of my former classmates and colleagues who are emigrants like myself are monolithic in support of Ukraine and condemnation of Russia. Amazingly, however, that is combined with entirely different positions on the connection of U.S. politics to that situation. For many of them, the fact that there were no new wars nor Russian invasions under Trump does not do anything to their assessment of the roles of the Obama-Biden administrations, which have been enabling, if not encouraging, Putin’s depredations. Partisan blinkers prevail over facts.

This leaves me with a dark thought. It is possible that the reason they did not buy into Putin’s lies is that they simply had not been constantly exposed to them, like they have been to the progressive agitprop of the “organs” of the Democratic Party (using the official term for the Soviet servile media): The New York Times, The Washington Post, CNN, etc. Despite the party’s statism and Soviet-like demagoguery, like the majority of the U.S. intelligentsia, they reflexively malign Trump and have been ready to believe any preposterous nonsense about him spewed by those organs, while the opposition is censored. The thought is very dark indeed, because I am not sure how far this country is from becoming a hor shahor. PJC

Michael Vanyukov holds a Ph.D. in genetics and is professor of pharmaceutical sciences, psychiatry, and human genetics at the University of Pittsburgh. He immigrated in the U.S. as a refugee from the Soviet Union more than 30 years ago.