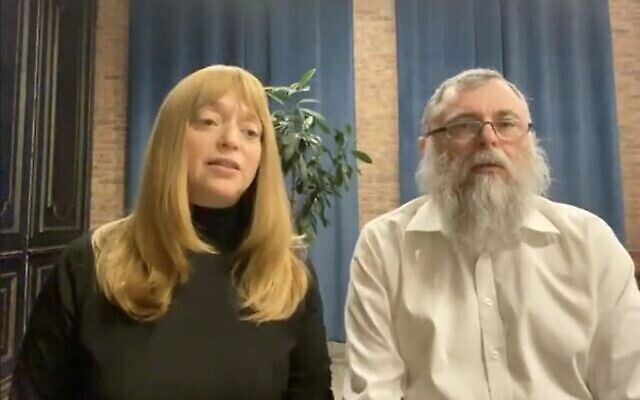 Rabbi Jonathan Markovitch and his wife, Inna, Chabad emissaries in Kyiv, Ukraine, speak to journalists in Israel through Zoom on February 24, 2022. (Screen capture)

A top rabbi in the Ukrainian capital of Kyiv on Thursday said dozens of people were sheltering in his synagogue, where he and his wife had stockpiled tons of food, fuel and mattresses in expectation of the Russian invasion that finally came overnight.

Rabbi Jonathan Markovitch and his wife Inna said hundreds of Jews still remained in Kyiv, mostly those who lacked the means to escape the city before the attacks started early Thursday morning. Those who did not leave before 6:30 a.m. were now stuck inside the city as the roads around it had become completely clogged with civilians trying to flee the fighting, they said.

In the early hours of Thursday morning, after weeks of intense diplomacy and despite the threat of harsh Western sanctions on Moscow, Russia launched a massive military operation against its neighbor Ukraine while claiming it sought a “demilitarization” and “denazification” of the country. Videos showed heavy artillery fire and what appeared to be missile strikes against sites in Kyiv, Odessa and Kharkiv, among others. The Ukrainian government said a Russian invasion had begun and military sites nationwide were being attacked.

President Joe Biden denounced the “unprovoked and unjustified” attack on Ukraine and said the world will “hold Russia accountable.” Numerous world leaders reacted with outrage and promises that a heavy price would be paid.

And after weeks of Israel waffling on whether or not to condemn Russia, Foreign Minister Yair Lapid came out against Moscow’s attack at noon, calling it a “grave violation of the international order.”

The Markovitches, who have served as Chabad emissaries in the city for more than two decades, said their immediate concern as of Thursday afternoon was security for their synagogue, the Kyiv Jewish Center.

“Our urgent need now is for a serious armed security company. We are afraid of looting and riots that may arise on the Ukrainian side. We saw that in 2014,” Jonathan Markovitch said, referring to the revolution that year that ousted the pro-Russian president, Viktor Yanukovych.

“Thank God we weren’t hurt in 2014, but now the situation is different. People know we have food stocks in the Jewish community center,” Inna Markovitch said.

Her husband said they were keeping the synagogue open as a place of refuge for the Jewish community only, and were not likely to let in people they didn’t recognize.

“I would give them a parcel of food. But I would not let a person stay here if we didn’t know them because I’d be scared,” he said.

The couple said they are somewhat concerned about both general rioting and explicitly antisemitic attacks on the synagogue, though Jonathan stressed that — despite Russian President Vladimir Putin’s dubious comments about the need for “denazification” — they had never experienced significant antisemitism in the country. He added that incidents that had taken place were dealt with by the country’s law enforcement.

“We don’t feel antisemitism on any level. There is a Jewish president! It’s hard to relate to Putin’s words. Jews are very involved in society here,” he said.

However, Markovitch noted that bad situations do have a tendency to bring out antisemitism. “Historically, we know that when there are problems, people blame the other,” he said.

According to Inna, the couple stockpiled 5-6 tons of food, along with water, fuel and 50 mattresses in the basement of the synagogue and a few dozen people had already taken refuge there. She estimated that they had enough supplies to sustain them for a week. The couple said Kyiv lacked bomb shelters, so most people were taking shelter in the city’s subway stations, while they were hoping that the synagogue’s basement would provide sufficient protection.

“There’s no bomb shelter here, but at least we can be together,” her husband said.

“We have a lot of people downstairs who came to stay with us, to get shelter and to be with us,” he said.

As they both have Israeli citizenship, the Markovitches said they were repeatedly told by the Israeli Embassy in Kyiv to leave the country in the days leading up to the Russian invasion, but decided to stay in the city in order to help the Jews who remained in the city, who were mostly elderly or poor.

“Those who left are the wealthy and young. The people who stayed here were people who were not able — for medical or financial reasons — to leave,” Inna said.

The Markovitches said they did not know how many of the roughly 2,500 Jews that make up the Kyiv community remained in the city, but they knew it included the 200 or so who are bedridden and likely several hundred more, based on the fact that they normally deliver packages of food to 800 needy members of the community.

She said that when they woke up this morning, they found that their entire apartment building had emptied out almost completely and that no one was on the street when they came outside.

“We had the feeling we were the only ones left in Kyiv,” she said.

A number of other Jewish communal leaders from across Ukraine similarly noted that those left behind were mostly elderly or economically disadvantaged.

“There’s huge panic,” a senior official from the Tikva organization in Odessa, which provides Jewish education and houses 300 orphan children, told the Times of Israel. “We’ve been taking calls since 4 a.m. A lot of elderly people are worried they won’t have enough to eat. People are asking us what to do.

“At this stage, we’re telling the community to stay at home. From time to time there are explosions on the streets and we don’t know whether it’s safe to go out. The exits from the city are already jammed with traffic as people try to flee,” the official said, asking not to be named.

Rabbi Pinchas Vishedksi, an Israeli-born Chabad emissary who served as a community rabbi in eastern Ukraine’s Donetsk until August 2014, when he and most of his congregation fled the Russian takeover there, said he’d been warning people to leave the area for weeks.

“We’re still saying, get out if you can, and try to avoid areas where there’s firing. Some families have fled to Rostov [in Russia], and we’ve asked the community there to take them in. But it’s not enough. Most — and many of them are elderly — have stayed in Donetsk,” he told The Times of Israel.

In Kyiv, the Markovitches said their son, daughter-in-law and grandchildren were considering leaving the city but weren’t sure what to do.

“We’re getting contradictory advice. The French say stay home. But other embassies say leave. There’s no clear one voice we can listen to,” Inna Markovitch said.

Her daughter-in-law, Cherry Markovitch, a French citizen, recalled the early morning sirens that jolted them awake as the Russian attack commenced.

“I was shaking for two hours after that,” she said, noting that unlike her husband and his family, she’d never lived in a country like Israel where air raid sirens are a regular occurrence.

“We don’t know where we can go, but we have suitcases packed,” she added.

With a marked annoyance in his voice, Jonathan Markovitch noted that in the days leading up to the Russian attack, the Ukrainian government had regularly told its citizens that there would be no such invasion — even as Israeli officials were calling for them to leave.

However, he said he would not comment on politics beyond that, out of fear that it could compromise his position, putting him at odds with one side of the conflict or another.

Sue Surkes contributed to this report.