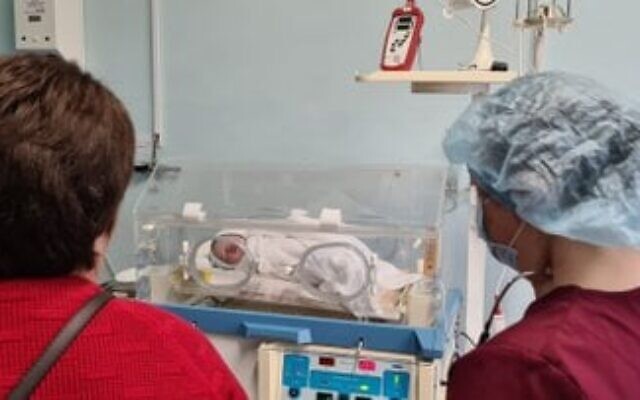 Doctors at the Israeli field hospital in Ukraine delivered the first baby born at the medical site set up amid Russia’s invasion of the country, Israel’s Foreign Ministry announced Friday.

“After a very difficult week, finally some good news,” the ministry said, adding that both the baby, born Thursday, and mother were doing well.

The baby was delivered via Caesarian section, according to a public relations official at Sheba Medical Center, which is helping operate the hospital in Mostyska, outside the western Ukrainian city of Lviv.

The hospital is named “Kohav Meir” (“Shining Star”) in honor of former Israeli prime minister Golda Meir, who was born in Ukraine and was the founder of the Foreign Ministry’s Agency for International Development Cooperation aid program, which is leading the project.

Housed on the grounds of an elementary school, the NIS 21 million ($6.5 million) facility fills 10 outdoor tents and has also converted multiple classrooms into hospitalization wards.

Health Minister Nitzan Horowitz is expected to visit the hospital next week during what would be the first visit to Ukraine by an Israeli minister since the war began, Ukraine’s ambassador to Israel said earlier Friday.

Along with the hospital, Israel has sent humanitarian aid to Ukraine but not provided military assistance as it seeks to walk a diplomatic tightrope between Kyiv and Moscow.

Israel has avoided harshly criticizing Russia, or supporting Ukraine too strongly because of Russia’s presence in Syria. Israel carries out airstrikes against Iran-linked targets in Syria, with Russia’s understanding, to prevent Iran-backed forces from gaining a foothold on Israel’s northern border.

Israel has also sought to capitalize on its strong ties with both nations to help mediate between the two countries with Bennett flying to Moscow to meet with Russian President Vladimir Putin, and speaking several times to Ukraine’s Volodymyr Zelensky. PJC