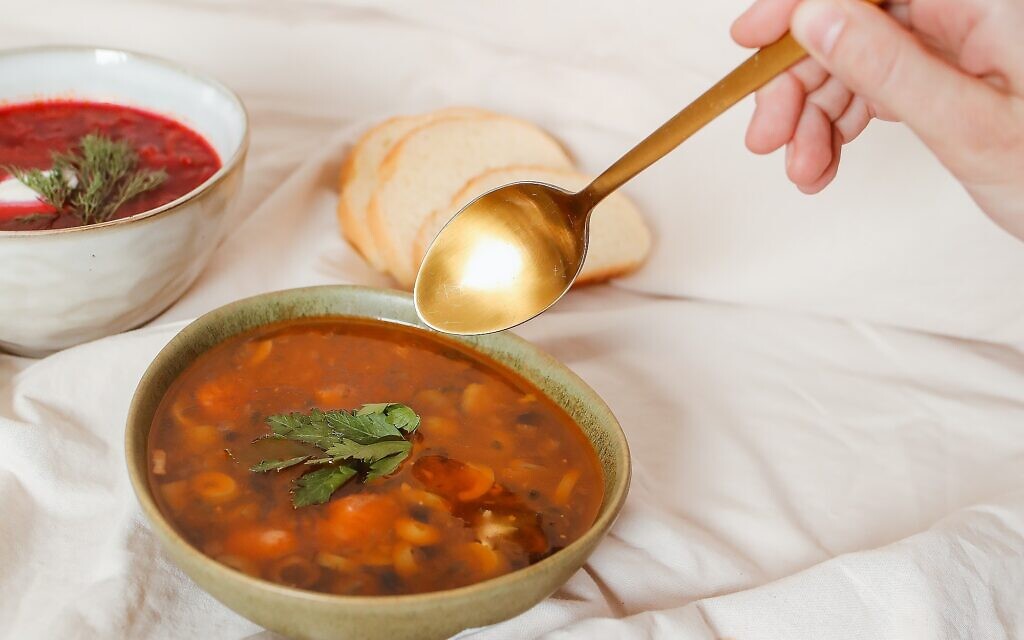 When Russia’s barbaric aggression against Ukraine began, Jewish aid organizations estimated that 200,000 Ukrainian Jews were integrated into the life of that country, making the Jewish community there the third-largest in Europe and the fifth-largest in the world.

Since March, Jews have fled in droves, mostly to Israel. Feeling helpless, my husband and I sent money through the Jewish Federation. At Passover, we placed a beetroot on our seder plate in solidarity with the people of Ukraine.

Borscht, the gorgeous garnet-colored soup, gets its radiant hue from beets. Popular throughout Eastern Europe, borscht was not only invented in Ukraine but is its most famous food. However, original recipes were made from a bitter white root called borsh. Poverty prompted this unpleasant soup to become widespread.

But during the Renaissance, people began preparing this recipe from much sweeter beets, retaining the original name. Eventually, Ukrainians of means added beef, beans and vegetables to the recipe.

Many celebrated Jewish foods have their roots in Ukraine. Babka, the cake baked in loaf pans in America, is baked in high round pans in Ukraine. In both Ukrainian and Yiddish, baba means grandmother; babka means little grandmother. Some say this tall cake resembles grandma’s long skirt.

Many Ukrainian Jewish recipes are well known to Ashkenazi Jews, particularly challah and stuffed cabbage. Made with nutty-flavored buckwheat, kasha varnishkes evolved into bowtie pasta flavored with caramelized onions. Often prepared with butter and served with smetana, potato latkes are beloved in Ukraine. Jews created an oil-based version to eat with meat. This popular dish is served at Chanukah and throughout the year.

But there are some Ukrainian Jewish foods unfamiliar to most Americans. Carrot and zucchini muffins are popular at Passover but are eaten all year, kotlety are meat patties stuffed with mushrooms and syrniki, cheese pancakes, are a treasured treat.

Since the crisis in Ukraine began, I have cooked these dishes as a tribute to Ukrainian Jews forced from their homeland by a cruel tyrant — a theme that has replayed throughout Jewish history. While it is unclear if Jews have a future in Ukraine, I’m trying to keep the memory of Jewish life there alive through food.

When you chop beets, your hands turn red. I, therefore, rely on bottled borscht, enhancing it so even a Ukrainian grandmother would think it’s homemade. The only way she’d suspect the truth is that my hands are not stained.

Three days before serving, place all the ingredients in a large stockpot. Simmer covered, stirring occasionally, for one hour, or until the meat and potatoes soften. Check the seasonings. If it’s too sweet, add a bit more vinegar. If it’s too tart, add a little sugar.

Refrigerate and skim the fat from the top. Remove the bay leaves, bones and peppercorns. Serve hot.

Equipment: Preferably a stand mixer fitted with the paddle attachment or a large mixing bowl and electric mixer

Place ⅓ cup of flour in a flat-bottomed bowl. Arrange 2 layers of paper towels on a platter. Reserve.

In the bowl of a stand mixer (or in a large mixing bowl if using an electric mixer), crumble the farmer cheese. Add the eggs. Mix well until combined. Add ⅔ cup of flour, sugar and salt. Beat until the lumps disappear. Gently mix in the raisins. Let it rest for 5 minutes.

Meanwhile, in a large skillet, heat 4 tablespoons of oil on a medium-low flame, adding more oil at any time, if needed.

Using a soup spoon, ladle a heaping spoonful of pancake batter, and drop it into the reserved flour. Gently roll the batter around in the flour. Lift the batter ball and, with your hands, form it into a flat pancake. Shake off as much excess flour as possible.

Move the pancake into the heated oil. Repeat, but don’t put more than 4 pancakes into the skillet at a time. Fry them until the bottom sides are golden brown and firm. With a spatula, flip them to the other side until golden brown. Watch the pancakes carefully as they burn easily. Move them to paper towels to drain.

Before the second batch, you may need to drain the oil from the pan as it could be dusted with flour, which may burn. If so, when cool, wipe out the pan with paper towels, and start again with another 4 tablespoons of oil.

Serve immediately with yogurt or sour cream, preserves and/or berries.

In a medium-sized skillet, heat the oil on a medium flame. Add the mushrooms and onion. Sprinkle it with salt, and sauté until the vegetables are wilted. Add the garlic and stir. When the garlic is fragrant, add the breadcrumbs and stir to combine for one minute. Remove it from the flame and reserve.

Place the turkey in a medium-sized bowl. Add the onion, salt and pepper, and mix it together with a fork. Spread the flour on a dinner plate.

Set up the ingredients in the order that you’ll need them. Start with the bowl of turkey, followed by the mushroom filling and then the plate of flour, ending with a clean plate, placed next to the stovetop.

Place ⅓ cup of turkey in your palm. Flatten the turkey into a thin burger patty and make an indentation in the center. Place 1½ teaspoons of the mushroom filling in the indentation. Close the turkey around the filling, making sure there are no seams. Flatten the patty a little. Roll the patty in flour and shake off the excess. Reserve them on the clean plate.

Repeat until all the turkey is gone. You will need to rinse your hands under cold water once or twice so they don’t get sticky. Reserve the leftover mushroom filling.

Drizzle 3 tablespoons of oil in a large skillet and heat on a medium flame. Move the kotlety to the skillet and fry until it’s browned on the bottom. Turn them over and brown the top side. Turn them back and forth a couple of times until the turkey is no longer pink inside. If browning occurs too quickly, lower the flame.

Move the kotlety to a platter. Heat the reserved mushroom mixture on a medium flame and sprinkle it over the top of the kotlety.

Set up a food processor with the metal cutting blade. Pour the water into 2 large pots until they are two-thirds full.

Peel the carrots and both potatoes. Rinse them and the zucchini under cold water, then drain them on paper towels.

Dice the carrots and sweet potato into ½-inch pieces. Move them to one of the large pots of water. Cover the pot with a lid, and boil it on a high flame for 45 minutes, or until the vegetables are very soft when pierced with a utensil-sized fork.

Dice the white potato and zucchini into ½-inch pieces. Move them to the second pot of water. Cover it with a lid, and boil it on a high flame for 35 minutes, until the vegetables are very soft when pierced with a utensil-sized fork.

Meanwhile, dice the onions, then chop them. Heat the oil in a medium-sized skillet on a medium-low flame. Add the onions and sprinkle them with salt to taste. Sauté them until the onions are fragrant and softened. Reserve.

Preheat the oven to 350 degrees F. Coat the muffin tins generously with no-stick vegetable spray or preferably with butter, as the muffins will release from the pans more easily. Do not use muffin pan liners, as these muffins are quite soft and fall apart when pulled from liners.

Drain the zucchini mixture in a colander until the cooking liquids stop dripping. Move it to the food processor. Pulse on and off to puree as the zucchini gets watery. With a spatula, move it to a second large bowl.

To both bowls, add half of the onions, ¾ teaspoon of salt, ¾ teaspoon of sugar, 1 egg, ¼ cup of potato starch and ½ teaspoon of lemon zest. With a silicone or wooden spoon, mix the ingredients in each bowl until well combined.

Bake for 45-50 minutes. A cake tester inserted in the centers should come out clean. Remove the pan from the oven, and cool it completely to room temperature before removing from muffin pans.

Serve them muffins with borscht, kotlety, stuffed cabbage and even eggs. PJC

Linda Morel writes for the Jewish Exponent, an affiliated publication where this first appeared.