JCC camp staff made masks out of t-shirts so that JCC campers would be in compliance with the new order. Photo provided by the JCC of Greater Pittsburgh

At the beginning of 2020, we asked communal leaders to imagine Jewish life in 2040. Some predicted that technology would become a prominent unifying force and means of connection.

Just a few weeks later, they were proven right.

This past year brought major shifts in how we engage with our communal institutions, our neighbors and even our families. And yet, though COVID-19 upended our lives, Jewish Pittsburgh spent much of 2020 doing one of the things it does best: caring.

When people moved inside, individuals and organizations ensured that shuttered doors didn’t beget silence. Phone calls, contactless meal drop-offs and virtual programming became mechanisms to combat isolation and safely embrace one another. Our communal organizations raised funds to help those struggling most, provided counseling services, hosted blood drives. Many congregations moved their services online so their members could still join together in prayer, even if not in person.

2020 will provide plenty of material for historians and researchers to unravel in the years to come, but allow us to share one factoid for our data-driven readers: Between March 11 and Dec. 16, the word “Zoom” appeared in 182 of our stories. In the 10 years prior, it was used nine times.

Here is a look back at the year that was.

After 2,711 pages and seven-and-a-half years of textual rigor, members of Pittsburgh’s Jewish community completed the Daf Yomi cycle. Both for those who joined nearly 90,000 Jews at MetLife Stadium, or participated online with thousands worldwide, Jan. 1 was a chance to reflect on years of daily Talmud study and inspire others to participate in Daf Yomi as a new cycle began. 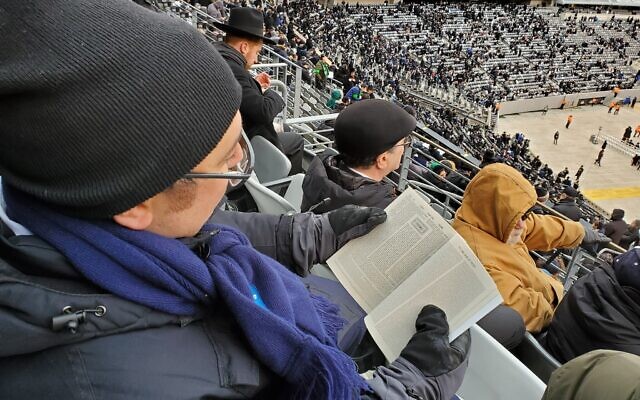 Daniel Solomon reads from the Talmud during the Siyum Hashas on January 1, 2020. Photo by Adam Reinherz

Following a 24-year career at the FBI, Shawn Brokos joined the Jewish Federation of Greater Pittsburgh as its director of community security. Brokos replaced Brad Orsini after his move to the Secure Community Network, and said she would continue Orsini’s efforts to keep Jewish Pittsburgh safe. Jewish professor sues Point Park University for alleged discrimination Chana Newman, a professor at Point Park University since 1964, sued the institution claiming employment discrimination based on her Jewish and Israeli ancestry and alleged that anti-Zionist professors and students sought her removal once she rejected efforts to malign Israel. The Chronicle is continuing to cover the story.

After misguided fear about the coronavirus negatively impacted Chinese-owned businesses, the Chronicle encouraged readers to support local Asian restaurants (while following appropriate dietary laws). In the early weeks of our COVID-19 coverage, editorials and op-eds asked public officials to disseminate a message that local Chinese establishments are safe and sanitary, and that xenophobia is unwelcome.

Local Jewish institutions prepare for coronavirus and address its arrival

At the beginning of March, synagogues, schools and communal institutions worked to avoid an outbreak and create plans in the event of viral spread. Although programming continued in person throughout the first two weeks of the month, by March 18 much had changed. Services at synagogues were canceled or moved online, and the Jewish Community Center of Greater Pittsburgh suspended in-person programs. Virtual fitness classes were offered free regardless of membership. 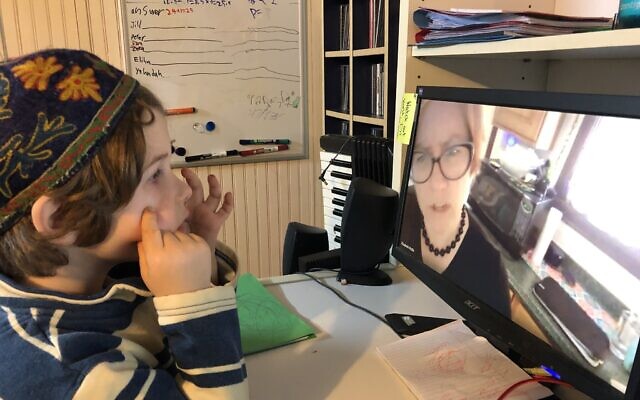 CDS Pre-K student Elihu Braasch participates in an online lesson with his teacher Liz Wolfe in the family basement that has been transformed into a classroom space. Photo courtesy of Community Day School

Following the March 15 closure of both its branches, Pittsburgh’s JCC furloughed almost 50 of its 135 full-time employees, moved another 50 to part-time employment and announced that its 350 part-time employees would not be scheduled to work for the foreseeable future. The JCC also noted that all senior staff members had taken salary cuts. The Pittsburgh section of the National Council of Jewish Women laid off employees, and the Pittsburgh Jewish Chronicle, like many newspapers nationwide, experienced a loss of revenue after severe declines in advertising.

Howard Reisner, owner of Chair Restoration on Murray Avenue, became the first member of Pittsburgh’s Jewish community to die of COVID-19. Rosner, 78, was remembered for his involvement in the Lubavitch community and the happiness he brought to those he encountered.

Ed Frim, a passionate Jewish educator and innovator, died at 61. Frim, the former Agency for Jewish Learning executive director, was remembered for his commitment to inclusion, musical abilities and kindness. 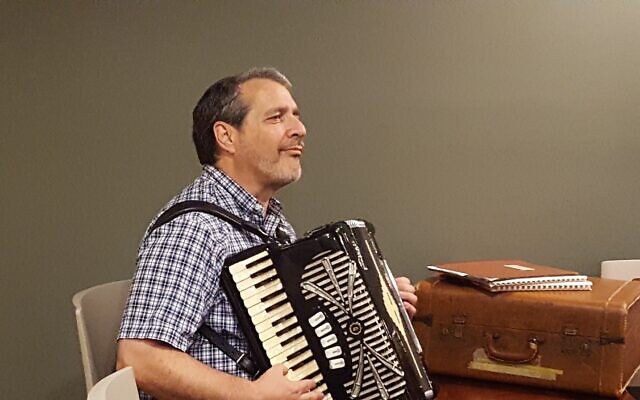 Ed Frim plays the accordion at a USCJ conference in July 2018. Photo by Aimee Close

After George Floyd, a Black man, was killed by a Minneapolis police officer, Jewish groups voiced solidarity with national protesters. The Jewish Federation of Greater Pittsburgh’s Community Relations Council said in a statement that it was “heartbroken by the senseless and unnecessary death of George Floyd at the hands of law enforcement.” The umbrella organization also commended Pittsburgh Chief of Police Scott Schubert for speaking out against the atrocity and for taking steps to use it as a teachable moment at the Pittsburgh Police Academy.

Rabbi Jamie Gibson, of Temple Sinai, and Rabbi Paul Tuchman, of Temple B’nai Israel, retired from their pulpits. Gibson, who headed Temple Sinai for 32 years, was feted with a series of celebrations including a proclamation from Pittsburgh Mayor Bill Peduto and a “drive-bye” parade. Tuchman, who served B’nai Israel for 11 years, was praised for his easygoing nature, and said he was eager to return to Arizona where he grew up.

In June, the Jewish Federation of Greater Pittsburgh’s pandemic assistance reached more than $1 million. By Dec. 16, that number had skyrocketed to $7,300,854, providing relief funds and grants toward communal initiatives, including the delivery of meals to homebound seniors, school lunch programs at Yeshiva Schools and pay for health screeners at Jewish facilities.

The Jewish Federation of Greater Pittsburgh. Photo by Adam Reinherz

Non-Orthodox congregations wrestle with the how and when of reopening

Yeshiva Schools of Pittsburgh underwent a historic transition as, after more than 40 years at the helm, Rabbi Yisroel Rosenfeld passed the baton to former student Rabbi Yossi Rosenblum. Previously, Rosenblum served as principal of the Yeshiva Boys School and educational director and head of Yeshiva Schools. Rosenfeld became head shaliach of Western Pennsylvania and the rabbi of the Lubavitch Center of Pittsburgh. 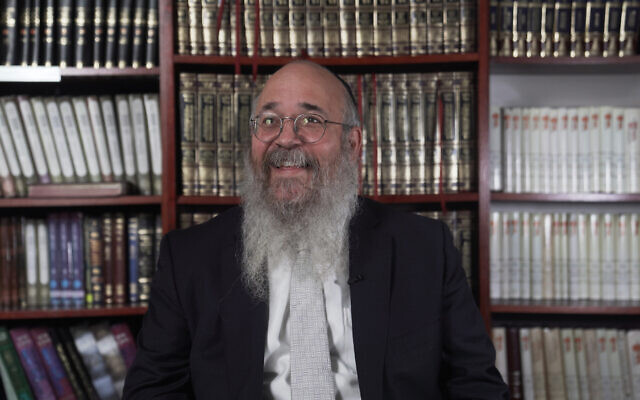 After celebrating Passover “Zeders” and experiencing Tikkun Leil Shavuot online, local residents experienced another set of Jewish holidays amid the pandemic. Whether it was making special recipes for Rosh Hashanah meals or finding ways to convert one’s dining room into a space for a meaningful Yom Kippur, members of Pittsburgh’s Jewish community creatively observed the High Holidays.

Two years after the shooting at the Tree of Life building, local residents marked Oct. 27 by observing an online commemoration featuring a performance from famed cellist Yo-Yo Ma. The day was also spent in Torah study, volunteerism and prayer. 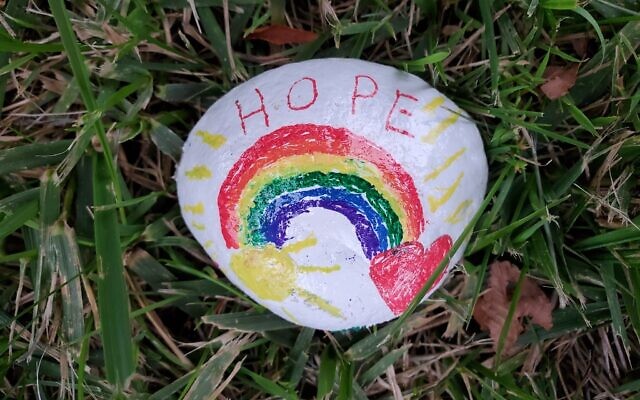 Rock left outside the Tree of Life building on October 27, 2020. Photo by Adam Reinherz

Moshe Taube, a Polish Jew whose inclusion on Schindler’s List enabled survival during the Holocaust, died at 93. Following the war, Taube became an internationally celebrated cantor, who, after leading services at Congregation Beth Shalom for decades, continued the task at Young Peoples Synagogue throughout his 90s.