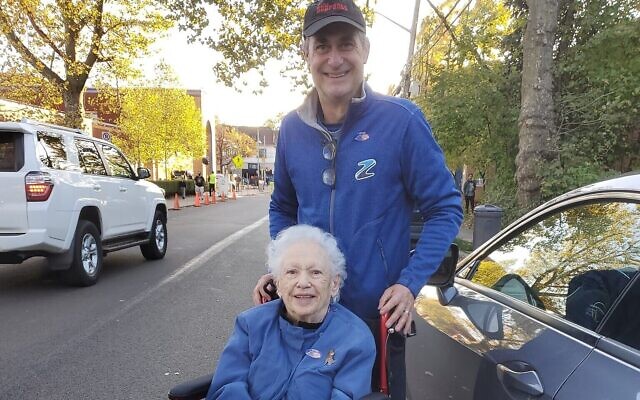 Despite long lines and chilly temperatures, Pittsburgh voters eagerly cast ballots in person the morning of Nov. 3, exercising their civic duties and joining nearly 97 million others who had already voted in this historic election.

By 7:05 a.m., Sheila Posin, of Squirrel Hill, counted 70 people ahead of her at Shaare Torah Congregation. The line of voters stretched outside, she said.

After being called inside and directed to a voting booth, “We were given a pen, a long piece of paper,” she said. “We filled in the dots, like we did back in the day, and slipped it into a ballot-reading machine, and that was the end of the process.”

Apart from the crowding indoors, the entire process was “very simple.”

Kara Bernstein, of Squirrel Hill, said it was strange to vote on a paper ballot, but noted that the overall experience at her polling place — Carnegie Library of Pittsburgh Squirrel Hill branch — was well organized. Bernstein, who got to the polls around 7:30 a.m., was No. 38 in line and waited about 40 minutes to cast her ballot.

The process had never taken that long, she said, but she was encouraged to see so many people turn out.

“We all have a moral obligation to vote,” said Bernstein. “We're really blessed to be in a place that we have a say in our elections.”

Prior to Election Day, Liz Greenfield, of Squirrel Hill, got a letter saying her polling place had changed. Instead of Maxim Towers on Forbes and Shady avenues, Greenfield was directed to the Sixth Presbyterian Church on Forbes and Murray.

Greenfield arrived at the Squirrel Hill church at 6:45 a.m. in order to beat the crowds. With fewer than 10 people ahead of her in line, Greenfield managed to cast her ballot and head to work with little interruption. She said she was surprised by the seamlessness of it all but was mostly pleased that Election Day had finally arrived.

“I hope we can move on,” Greenfield said. “There’s too much negativity.”

Outside the Squirrel Hill Jewish Community Center of Greater Pittsburgh, Steve Gelernter escorted his mother Fanny into their car. Fanny, an octogenarian and Holocaust survivor, had just voted indoors.

Memories of Nazi Germany, along with present-day fears, prompted Fanny’s desire to cast a ballot, said Steve: “She said that when Charlottesville happened she had flashbacks to Nazi Germany and said, ‘This is how it all started.’” 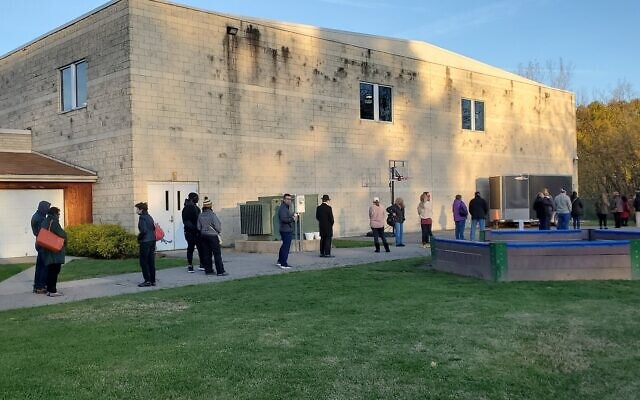 Voters wait in line outside of the South Hills JCC. Photo by David Rullo

Shelby Cunningham said it was important to exercise her freedoms on Election Day. The Greenfield resident stood outside Shaare Torah Congregation providing voters with literature about Jay Walker, a Green Party candidate for Pennsylvania District 23.

Cunningham, who has a history of lung problems, said she was worried about being able to safely engage with voters this year. So Cunningham’s husband took an old TV antenna and attached clothespins to the ends and made her a tool to give out material while still social distancing.

By 10:30 a.m., nearly 90 people had already voted inside Rodef Shalom Congregation in Shadyside. Yael Schenker, a Highland Park resident and judge of election for precinct 07-01, said she was happy to see so many voters engage in the process.

“People are excited to vote,” said Schenker. “We are extremely lucky to be part of a democracy.” 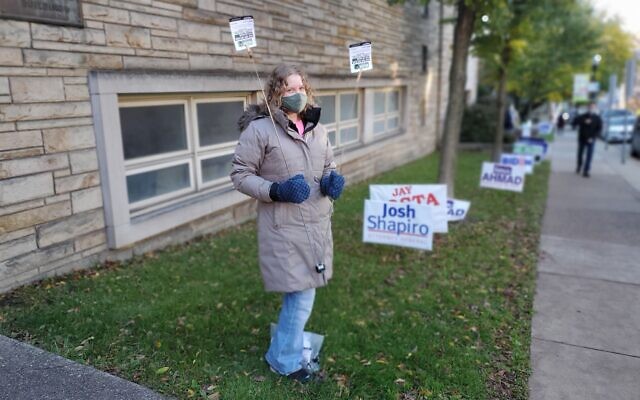 Tiana Van Slyke waited in line for 30 minutes before voting at the South Hills JCC.

Van Slyke, who said she voted for Trump, didn’t expect to know election results for at least a few weeks.

George and Toni Brkovich, also at the South Hills JCC, were bothered by the prospect of no clear winner by this evening.

“There’s 90 million people that voted already — there should be some idea,” said Toni Brkovich. “They knew this was a possibility. Why aren’t they going to have it counted by the end of the night tonight?”

George Brkovich expressed similar dismay about this year’s election process. “It’s a little frustrating because of the way our courts are making decisions for us,” he said.

Mitchell Hill said he decided to vote in person at the South Hills JCC because he never got his an absentee ballot for the previous election.

“I thought it would be better to show up,” he said. Hill waited 20 minutes in line before filing his ballot.

Kim Lundy waited 30 minutes at the South Hills JCC before casting her vote. She said it was necessary to fulfill her civic duties in person this year.

“I wanted my vote to be counted,” said Lundy. “I thought it would be safer.” PJC