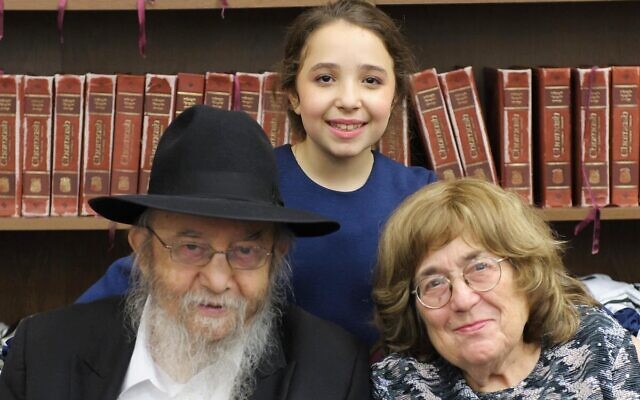 Rabbi Ephraim and Mrs. Miriam Rosenblum at the bas mitzvah of their granddaughter Esther (Photo by Eliran Shkedi)

Miriam Rosenblum, a lifelong Jewish educator who influenced thousands of Yeshiva School elementary students over a five-decade career in Pittsburgh, died last week. She was 78.

Her death comes about two months after that of her husband, the late Rabbi Ephraim Rosenblum, who died in September.

“One of the doctors told us she was suffering from something called heartbreak,” her son, Yeshiva Schools CEO Rabbi Yossi Rosenblum, told the Chronicle.

Though Rosenblum often was associated with her husband, a fellow Yeshiva educator and principal of the boys’ school, she was a force in Pittsburgh’s Jewish community in her own right. She founded the Keren Rachaim organization in Pittsburgh and dedicated herself to supporting those in financial, physical and spiritual need. Many Pittsburghers remember her regularly handing out Shabbat candles outside the Giant Eagle on Murray Avenue, and discreetly distributing gift cards to those in need, her family said.

One of her sons — she had six children; three of them followed in their father’s path and became rabbis — remembered another story.

A student of Rosenblum’s ran home to his mother at the end of the day and said a boy in class was not acting nicely. The student’s mother said people wouldn’t be very nice to him, then.

“‘That’s not what Morah Rosenblum said,’” the boy retorted, according to Rabbi Yossi Rosenblum. “‘She said if we were all nice to him, he’d be nice to us.’ That was my mom.”

Yossi Rosenblum also said people frequently flocked to their house — and not just for the wise words of their father, a fixture in Orthodox and Chabad circles in Pittsburgh. People wanted to know what Miriam Rosenblum thought of things, as well.

Rabbi Mendy Rosenblum, another son, said one of his mother’s biggest legacies was the selfless work she did for Keren Rachaim in Squirrel Hill and elsewhere.

“I think she made a major impact on the community and minor ones, too,” he said. “Every individual felt her touch.”

Rabbi Yisroel Rosenfeld, who heads Chabad of Western Pennsylvania, said the “extent of Morah Rosenblum’s influence encompasses the entire world, wherever her hundreds of students share her light, a light that she so generously gave to others.”

“Each student was to her a diamond, multi-faceted and with unlimited potential,” said Rosenfeld, who helped lead the Yeshiva Schools while Miriam Rosenblum taught kindergarten, first and second grade there. “Every challenge was absolutely surmountable and she toiled tirelessly until success was achieved.

“Morah Rosenblum lived her life to do one more mitzvah, constantly encouraging everyone around her to do the same, every single day,” he added.