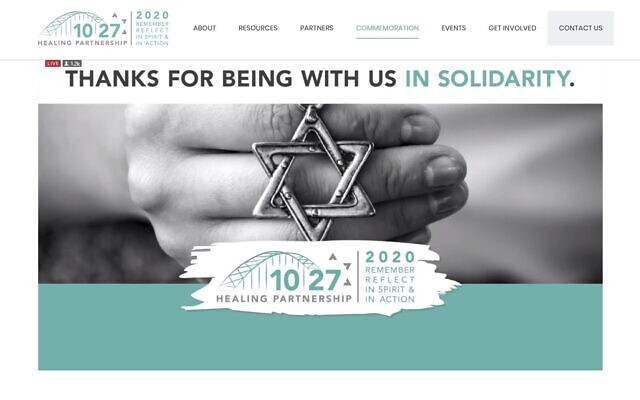 The 11 Jewish men and women killed during the massacre at the Tree of Life building on Oct. 27, 2018, were remembered two years after the shooting in a ceremony livestreamed on Tuesday, Oct. 27, 2020.

The Oct. 27 Commemoration Ceremony was viewed by over 1,300 people and featured cellist Yo-Yo Ma, Pittsburgh Mayor Bill Peduto and Allegheny County Executive Rich Fitzgerald. Family members of the victims, as well as representatives from the three congregations attacked — Dor Hadash, New Light and Tree of Life — remembered their loved ones in prerecorded video segments.

Elana Arian opened the 45-minute program singing “Nachamu Ami,” translated from Isaiah 40:1 as “Comfort, comfort My people, Says your God.” Arian is a leading voice in contemporary Jewish music. Her guitar playing was used throughout the commemoration, accompanying segments that reflected on the lives lost.

After opening words from Maggie Feinstein, director of the 10.27 Healing Partnership, 11 candles were virtually lit for each of the victims: Joyce Fienberg, Richard Gottfried, Rose Mallinger, Jerry Rabinowitz, Cecil Rosenthal, David Rosenthal, Bernice Simon, Sylvan Simon, Daniel Stein, Melvin Wax and Irving Younger. Family members of those who were murdered were then seen lighting candles for their loved ones in their homes.

Yo-Yo Ma recounted Mister Rogers’ advice to look for the helpers in times of tragedy, then performed “Prayer” from composer Ernest Bloch’s “From Jewish Life.”

Family members of those murdered were each asked for three words they would use to describe their loved ones in segments that highlighted the unique personalities of those who were killed. Members from each of the three congregations attacked also spoke of how they remembered the victims. The memories ranged from meaningful personal encounters to the victims’ vast contributions to congregational life.

“With mercy, accept our prayer on behalf of our country and its government,” Peduto read from the Conservative “A Prayer For Our Country.” Fitzgerald continued reading from the prayer, “Pour out your blessings on this land, upon its inhabitants, upon its leaders, its judges, officers and officials.”

The program was the part of a several-day commemoration to honor the lives of the victims of the Pittsburgh synagogue shooting, which included volunteer opportunities and study. The commemoration concludes with Torah study on Nov. 4 and 5.

“We have a special duty to remember the lives that were taken and lift up their stories whenever we can,” said Feinstein in closing the program. “We know, though, our work is not confined to one day.” PJC