Two years after 11 loved ones were ripped from their families, multiple bodies and minds were injured and a sense of communal serenity was shattered by the events of Oct. 27, 2018, the three congregations principally affected by the shootings — Dor Hadash, New Light and Tree of Life*Or L'Simcha — are trying to find a balance between looking at the past and focusing on the future, all within the constraints of COVID-19.

For Tree of Life*Or L’Simcha, there are the obvious losses of Joyce Fienberg, Rose Mallinger, Cecil and David Rosenthal, Bernice and Sylvan Simon and Irving Younger. Barb Feige, Tree of Life’s executive director, said the congregation is continuing to respect each family’s journey, but the near eradication of in-person gatherings has challenged longstanding support systems.

And, Feige pointed out, the congregation has suffered double displacement: First, in the aftermath of Oct. 27, 2018, Tree of Life relocated to Rodef Shalom Congregation. Then, because of COVID-19, Tree of Life went virtual.

When the 2019 High Holidays arrived, additional space was required beyond what Rodef Shalom, Tree of Life’s new home, could provide. The Calvary Episcopal Church offered its 1,000-seat sanctuary free of charge, which Tree of Life graciously accepted, yet this meant the congregation was tasked with personalizing an unfamiliar space. 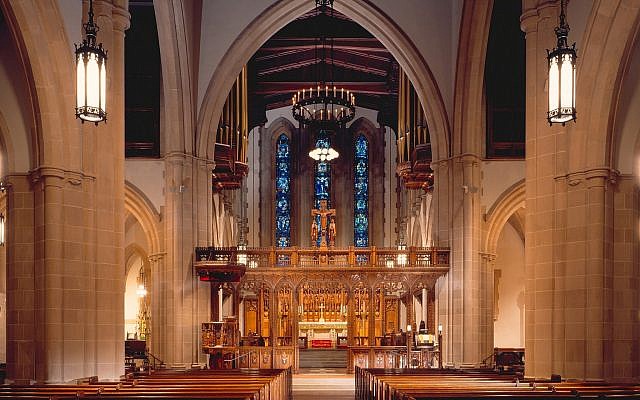 The need for virtual programming for this year’s High Holidays helped the congregation really get a sense of itself, explained Feige: “Tree of Life is more than a building. It’s a family. It’s a community. It’s people together, and yes, there is a connection to the building at Wilkins and Shady without a doubt — generation to generation has grown up in that building and celebrated simchas in that building — but we’re still a congregation, a family celebrating simchas together.”

Still, the lack of in-person connection had an impact.

“I think people missed that, and that’s unrelated to our trauma, maybe it piles on,” said Feige. “We know that one of the things the shooting did was highlight the preciousness of life, and you want to recognize those connections even more, and I think that COVID made people recognize that. That’s what's important for Tree of Life right now: to continue to maintain things that bring us together and keep us together because we can’t do it with physical space right now.” 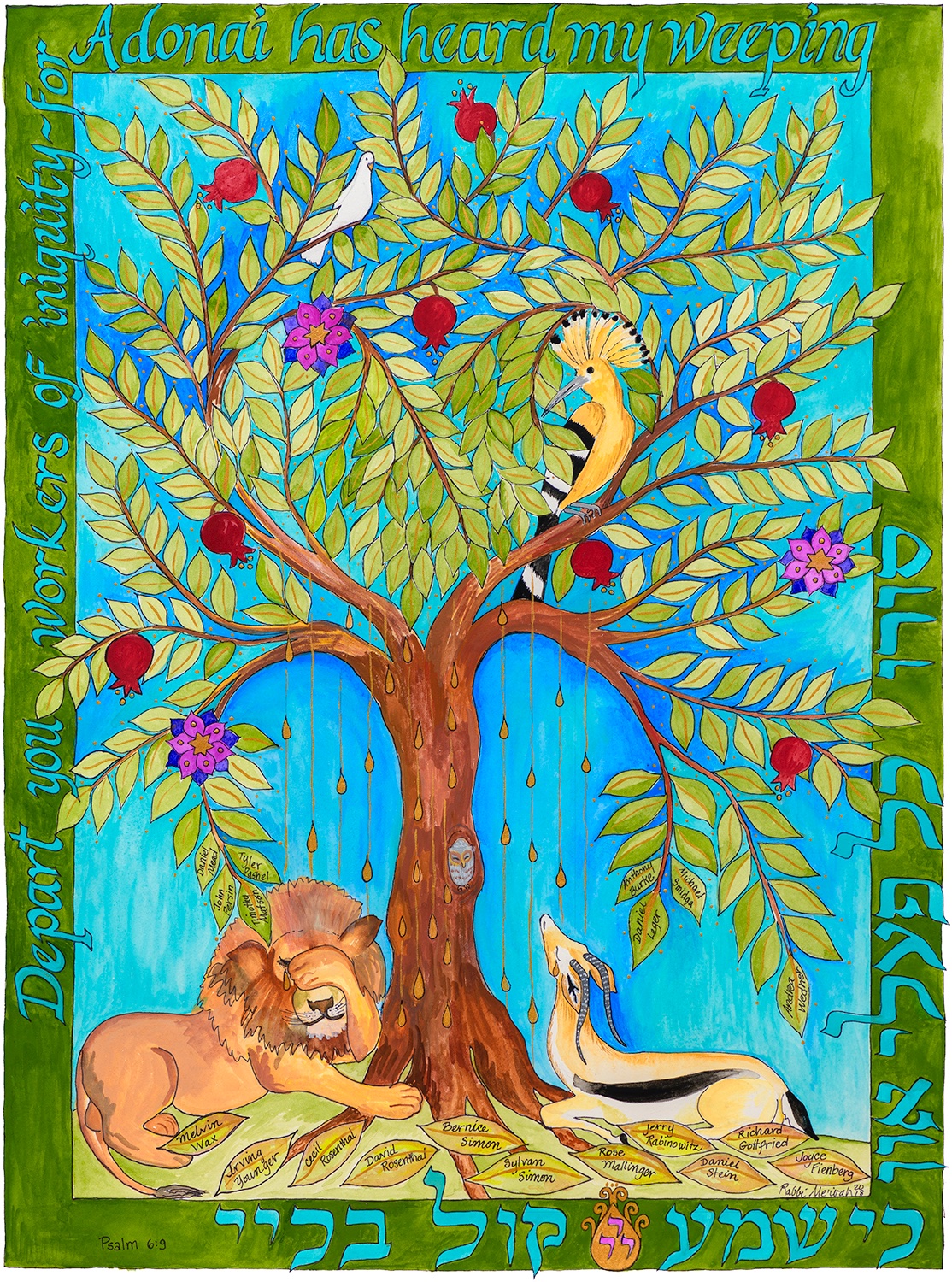 For New Light, the past two years have required solidifying a home and creating a safe space for members to grieve the losses of Richard Gottfried, Daniel Stein and Melvin Wax. “They were the religious heart of our congregation,” said New Light co-president Stephen Cohen. “They led our services. They were our choir. They were our event managers. They did everything. All of the day-to-day stuff that makes an organization work lay in the hands of those three individuals, and they're missed. They're missed terribly every single Saturday, every single day, because of what they contributed to the congregation.”

Since the Oct. 27, 2018, attack, the congregation has adopted different supportive measures, like regularly checking in on Gottfried’s, Stein’s and Wax’s families.

“We’re just trying to make sure everybody's doing all right, but it's just very difficult,” said Caplan. “It's a very emotional time for everybody, especially the families, obviously.” 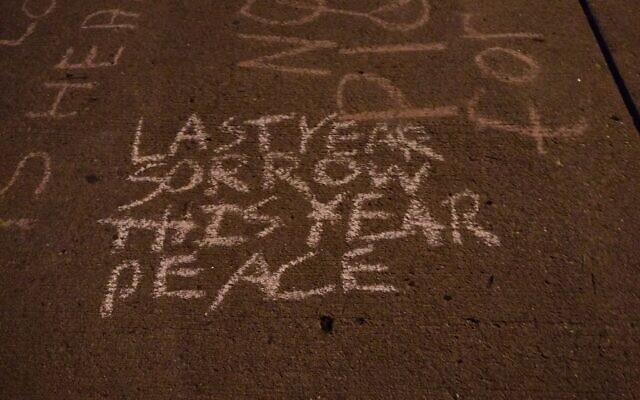 Chalk inscriptions outside Tree of Life building on Oct. 27, 2019. Photo by Adam Reinherz

New Light has several plans to mark Gottfried, Stein and Wax’s second yahrzeit. Apart from unveiling a new memorial board inside its current prayer space, the congregation will host a special service at the New Light cemetery. The latter will include the dedication of a monument and bench, as well as recognition of a tree seedling donated by the 9/11 Memorial & Museum.

The events will occur in-person and on Zoom — a hybrid pattern New Light has adopted during the pandemic, such as holding in-person and streamed Shabbat services.

“Ritual is very important to us, and under Jewish law there are some things that require in-person attendance in order to do the ritual, like Torah reading,” said Cohen.

“Beth Shalom has proven to be the most wonderful landlord,” said Cohen. “They have accommodated us in every way.”

That includes allowing New Light to hang its memorial plaques on the walls, and affix artwork in areas beyond New Light’s designated space inside Beth Shalom’s Helfant Chapel.

“They’ve helped us make a house a home,” said Cohen.

For Dor Hadash, honoring the memory of Jerry Rabinowitz and aiding those harmed by the events of Oct. 27, 2018, requires both words and action.

“For us on the second commemoration, we're aware that our country is changing,” said Donna Coufal, Dor Hadash’s president. “Our country is not a predominantly white country anymore. Our country is not a binary gender anymore. There's a lot of changes happening, and people … fight those changes in violent ways. And we've been the recipient of that violence.”

Losing 11 people because of hate, Coufal said, means that for Dor Hadash “it's really important to us to continue to stand up against hate, stand up against gun violence. And this 10/27 we intend to speak out on all of these issues.” 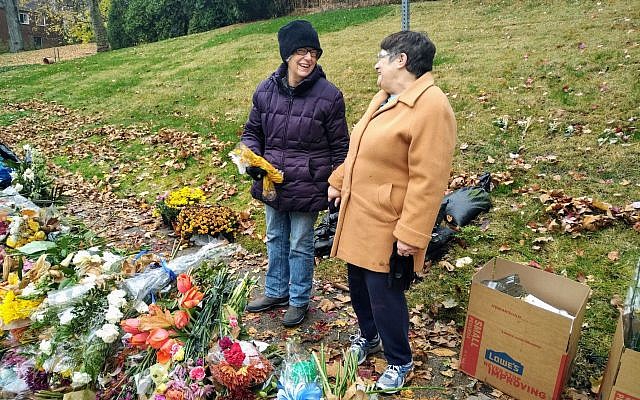 Susan Melnick, of Dor Hadash, left, and Barbara Caplan, of New Light, share a moment while separating flowers from glass near the corner of Wilkins Avenue and Murray Avenue in 2018. Photo by Adam Reinherz

Dor Hadash has plans for events surrounding the commemoration but it is important to the congregation to make explicit that the Oct. 27 attack was specifically directed against Jews; that white supremacist ideology promotes anti-Semitism, xenophobia and the demonization of people of color; and that the enactment and enforcement of reasonable firearm legislation would prevent future terror.

But Dor Hadash’s inclination toward action has necessarily been complicated by the pandemic.

People can only handle so much Zoom, Coufal said, so there need to be ways to facilitate aid and remedy problems from afar. Whether it’s caring for the vulnerable without physically being in the same room or speaking out about matters of concern from a distance, Dor Hadash plans to continue helping those hurt by past trauma as well as confront present-day difficulties.

Such work begins with a framework of memory, said Coufal: “My understanding of Judaism is that remembering is really important. We remember Jerry Rabinowitz and how we loved him and love him. I didn't know all of the other people who perished. But they were people who were going to synagogue. They were people who loved being part of a community. It's just the best way people can be. And we want people to be able to do that in a safe and happy way.”

With the second commemoration days away, congregations and their members recognize the need to carefully protect those in pain while reaching out beyond the bounds of a congregation.

“What gives us a sense of purpose as a community,” said Coufal, “is both looking inwards to help our own people, but also working to create a kinder and more just world.” PJC