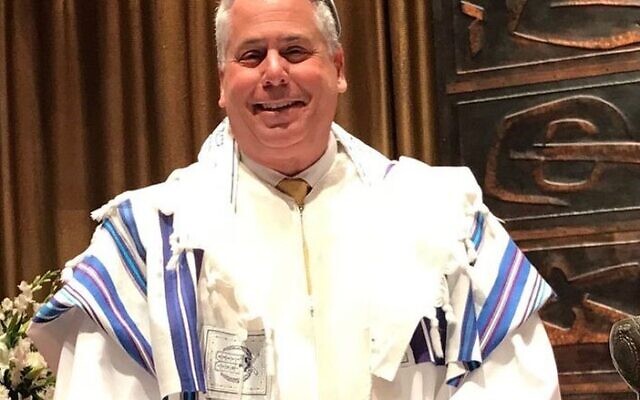 “He named her, many years later he married her, and this past January, he named her baby,” said Schiller. “That cycle is pretty amazing.”

Gibson, under whose 32-year tenure the Squirrel Hill congregation swelled from 350 families to more than 700, will be retiring this month. He will lead his final Shabbat service as Temple Sinai’s senior rabbi on Friday, June 19, although due to the pandemic, he will be alone on the bimah looking out into an empty synagogue.

The congregation had planned on celebrating Gibson’s leadership and saying goodbye to the rabbi who calls Temple Sinai his “family of families” with special Shabbat services, concerts, welcoming a new Torah and a host of other events and activities. Most of those, however, have been postponed until early next year as the temple remains shuttered because of COVID-19. 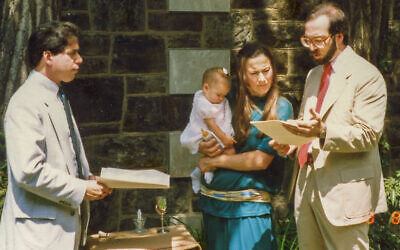 The rabbi was true to his word.

Prior to Gibson, Temple Sinai had seen several rabbis come and go. “We had three in 10 years, maybe more,” Dorfzaun said.

After having no luck finding a permanent rabbi through traditional means, a regional director of the Union for Reform Judaism suggested Dorfzaun and a vice president meet with Gibson at the URJ’s biennial. The pair agreed to a breakfast meeting with the prospective rabbi.

“We were waiting in line and there was this person in front of us and we both said, ‘I hope that’s not him; he looks so young.’” The duo, though, didn’t let Gibson’s apparent youth taint their judgment.

“We had breakfast and just knew this would work out perfectly,” Dorfzaun said. “He met with the search committee and stayed for 32 years.”

“I can’t say anything bad about this man,” current president Saul Straussman offered. “He’s terrifically generous and thoughtful and one of the most genuine men I’ve ever met.”

“For 32 years we have had a multi-talented instrumentalist as our rabbi,” said Straussman. “A man who could play guitar, who could sing, who could play piano. A man that spoke of love and affection through music.”

Temple Sinai’s cantor Laura Berman’s parents were members of the congregation before she became part of its leadership. She and Gibson share a love of Jewish music.

“He has a deep appreciation of various genres of Jewish music from the more traditional and classical to folk and newly composed works,” Berman said. “He set a great groundwork for me to expand upon what he has already helped the congregation to appreciate.”

“The two most important gifts we can give to our children are roots and wings; to be firmly rooted in our Judaic tradition and to be inspired to reach one’s fullest potentials,” she said. “That is what Rabbi Gibson leaves as his legacy. He leaves a congregation he has significantly rooted in Torah and Torah values and also our expression and devotion and ways of finding greater heights and deeper meaning.” 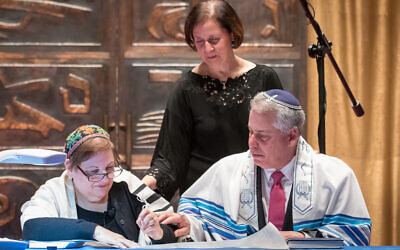 Rabbi Jamie Gibson helps write in the Torah created in honor of his retirement. Photo provided by Temple Sinai.

“From the moment I arrived in Pittsburgh, Jamie Gibson was a warm and welcoming colleague to me,” Bisno said. “I am grateful for the ways in which he shared with me what it means to be a rabbi to the community in Pittsburgh and for all we’ve shared and learned with and from one another.”

One of Gibson’s lasting legacies will be his outreach work to Jews as well as to the interfaith community, including his fostering of relations between the Jewish community and the Muslim and Presbyterian communities.

Susan Blackman is a member of The Pride Tribe at Temple Sinai. She was inspired to embrace her Judaism after the wedding of her cousin and his husband. She began attending Temple Sinai on the recommendation of a friend.

During her first visit to Temple Sinai, Gibson told Blackman that “he used to think civic unions were fine for same-gender couples, ‘but I don’t think that anymore,’” she recalled. “I was sitting in the congregation and thinking, ‘maybe I’ve come to the wrong place.’ He finished his thought saying, ‘no, it has to be full marriage, full equality for same-gender couples.’ I’m sure he said things after that, but I was quietly crying and didn’t hear.”

Temple Sinai’s members are “an incredible community of love and caring families that includes an 85-year-old woman living alone, a gay couple with two children and everybody in between,” said Gibson. While looking back at his accomplishments, Gibson frames the memories of his time as senior rabbi at Temple Sinai often using the pronouns “we” and “our.”

Born in Albany, New York, Gibson worked at a synagogue in Wausua, Wisconsin before arriving in Pittsburgh. Sinai’s “community was struggling when I came,” he said, but “we tapped into their latent strengths and built new strengths to create a community of 735 households that believe in the principles of liberal Judaism and each other.

“I think one of our great strengths has been our ability to care for our own pastorally, spiritually, in terms of learning and inspiring, but also stand for very important messages in the public square.” That work in the public square includes interfaith and intrafaith outreach, racial justice, LGBTQ+ rights, combatting anti-Semitism in America and across the world and support of Israel. The rabbi has led his congregation on 11 trips to Israel in the last three decades.

Pittsburgh will continue to be home to Gibson and his wife, Barbara Gibson, who works as an operating room nurse at UPMC-Shadyside.

After serving 32 years as Temple Sinai’s senior rabbi, Gibson has not yet finalized plans for what he will do when he no longer has to spend time planning weekly services or High Holiday messages, but said he will teach and continue the work he is passionate about, including serving on the UPMC ethics committee.

Temple Sinai will have a chance to acknowledge Gibson on Sunday, June 21, in a final “drive-bye” parade. The day will begin with Mayor Bill Peduto presenting a proclamation to the rabbi recognizing his achievements and “impact on the city of Pittsburgh.”

Lynn Lazar, who with Rick Rosenthal are co-chairs of the committee tasked with finding a permanent rabbi to succeed Gibson, noted that Gibson has been her rabbi for more than 20 years. She is one of his “biggest fans and supporters,” she said.

“I’m happy for him, that he’s successfully moving onto the next stage of his life and is going out on a high note,” said Lazar, adding that this is an exciting time for Temple Sinai as its membership looks to the future.

Gibson agreed, saying that there is a “generational shift in Judaism” and that it is important that shift is supported.

“In rabbinic school I got an A in prophets, but I failed prophecy,” he said. “I am not good at predicting the future, but I know that 10 years from now there will be a very different synagogue scene. As my generation ages out, others are going to decide if they want to fill the leadership roles available or create new institutions and vehicles for Jewish spirituality, social justice and all the things that used to be done under the synagogue’s roof.”

The congregation has hired Rabbi Darryl Crystal to serve as its interim rabbi, beginning in July.
Gibson will continue at Temple Sinai as rabbi emeritus. PJC