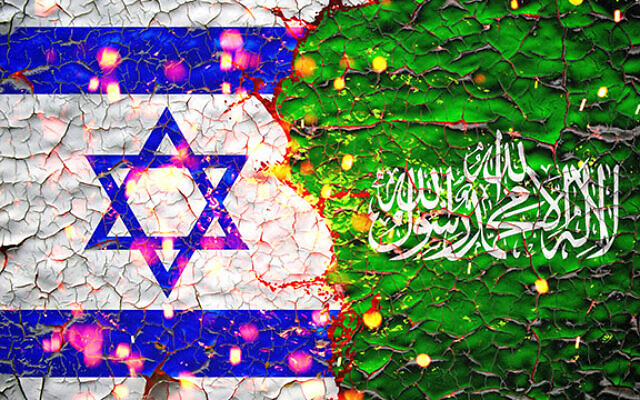 We recognize that there is a lot of misinformation circulating. Many find it confusing to follow, and difficult to understand what’s going on. The Chronicle continues to cover this ongoing crisis with fair and reliable news articles, and to provide insight and perspectives through analysis and opinion pieces. We publish most of these items in the weekly printed edition, but there’s even more content on our website. We’ve compiled some helpful links here. The links to articles published in the Chronicle are in reverse chronological order, with the most recent first.

If you have suggestions or news tips please email us at Newsdesk. To submit a letter to the editor about something that we’ve published please send it to Letters.

Published in the Chronicle: News articles

Anti-Israel message painted on Fence at CMU
The student group thought that the time was ripe ‘to start a conversation’ during Operation Guardian of the Walls.

Google removes diversity chief over antisemitic 2007 blog post
Antisemitism is a ‘vile prejudice’ and has ‘no place in society,’ says tech giant.

Pittsburgh stands in solidarity against antisemitism
The rally was in response to recent antisemitic attacks across the country.

Prominent European Jews worry the war against antisemitism has been lost
The widespread and sometimes violent attacks against Jews in Europe have some local Jewish leaders responding with uncharacteristic pessimism.

ADL: ‘Dangerous and drastic surge’ in antisemitism in US linked to Gaza violence
Recent days have seen a series of assaults against Jews in Los Angeles and New York and a large uptick in anti-Jewish activities online and on social media

Israel and Hamas agree to ceasefire after 11 days of bloodshed
Ceasefire set to begin at 2 a.m. Friday May 21 Israel time

Israeli embassy in China blasts state TV broadcaster for ‘blatant anti-Semitism’
Among other things, the TV presenter claimed that ‘Jews dominate the finance, media and Internet sectors’ in the United States.

Israeli-Palestinian conflict tears apart Chicago’s biggest Facebook moms group
An administrator of the site posted: “Anyone appearing to justify the occupation, genocide and apartheid that is taking place will be immediately removed.”

Community comes out to support Israel’s Operation Guardian of the Walls
As Hamas terrorists fired rockets into Israel, about 200 Jewish Pittsburghers gathered in Squirrel Hill to show support for the Jewish state.

Israeli flags burned outside 2 German synagogues
Incidents connected to the escalation of the Israeli-Palestinian conflict.

‘Major attack’ in Israel foiled as 3 gunmen shot in firefight near military base
Security official says attackers opened fire after being stopped by border police officers conducting routine inspections on a bus with illegal Palestinian workers. Published in the Chronicle: Analysis and opinion pieces

What’s wrong with The New York Times’ report on children’s deaths? So much.
Despite a veneer of balance “They Were Only Children” is a deeply flawed article that presents a skewed, sensationalist image of the Gaza conflict.

American Jews need allies against antisemitism
It’s possible that as Jews, we are not safe anywhere.

The hope for peace
“The entire Torah,” wrote Maimonides, “was given in order to make peace in the world.”

Future rabbis partly right, mostly wrong on Israel
There is barely a hint in the letter of a love for Zion.

One-and-a-half minutes
When the sirens sound in Israel, this young mother has 90 seconds to act: “I didn’t grow up with the gas masks and bomb shelters like my husband. This is his normal, not mine.”

My fellow Americans, your silence is deafening
Allegedly “woke” progressives jump on the anti-Israel bandwagon.

Hamas’ forever war against Israel has a glitch, and it isn’t Iron Dome
Why Hamas promises another war soon, and another and another. And why it won’t work.

Jewish Americans deserve hate crime protection too
“In passing the [COVID-19 Hate Crimes Act], members of both parties in the House and Senate demonstrated that they can do the right thing, at least once in a while.”

Not a normal Israeli Friday
Violence in the Jewish state: A view from the ground.

Rethinking the conflict
If the idea of a two-state solution is dead, Jett writes, “Israelis have a simple, binary choice. They can live in a democratic nation or a Jewish one, but it cannot be both.”

The Islamic Republic’s war on Israel
Hamas is a weapon, and the Palestinians are pawns.

Israel in distress
When individuals and communities live in darkness it is difficult for them to imagine the light and to have a sense of a larger community.

I cannot just put my anger aside until things are quiet
I am angry because we can do better.

Resounding bipartisan support for Israel
We are encouraged by the strong bipartisan voice in the Deutch-McCaul letter.

Anatomy of an intentional escalation: Israel’s approaching hot summer
The coming months will be tense for Israel and possibly very violent. Conflict aligns with the interests of the various Palestinian factions, as well as those of Turkey and Iran.

The Times of Israel

Foundation for Defense of Democracies (FDD)