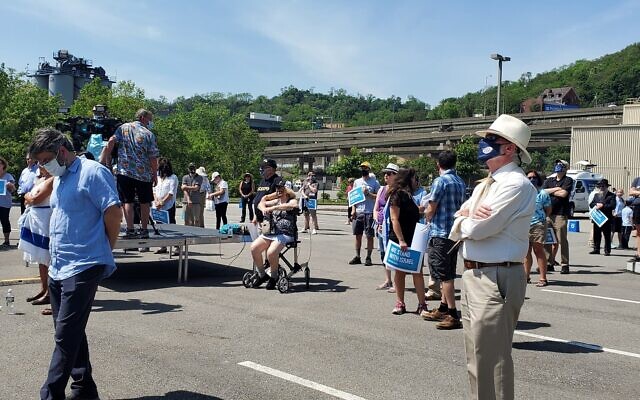 About 75 people gathered in the parking lot of the Jewish Federation of Greater Pittsburgh to express solidarity with Israel on May 21. Photo by David Rullo.

About 75 people gathered several hours before the start of Shabbat on May 21 in the Jewish Federation of Greater Pittsburgh’s parking lot to demonstrate their solidarity with Israel.

The rally, dubbed “We Stand with Israel: A community Vigil for Peace,” was held just hours after a ceasefire was declared between Israel and Hamas, and was sponsored by Federation’s Jewish Community Relations Council. Several speakers from across the local Jewish community addressed the crowd, as did the Federation’s Foundation Scholar, Rabbi Danny Schiff, from Israel via video.

David Sufrin, the Federation’s board chair, welcomed those in attendance. He spoke of his support for Israel and his frustration with recent antisemitic attacks in Los Angeles, Montreal and New York.

More than 4,000 missiles fired by the terrorist organization Hamas had injured and killed Israeli citizens, regardless of their religion, Eglash said.

“Jewish Pittsburgh and the Jewish Federation have always stood with Israel,” he continued. “Today, more than ever, as our brothers and sisters face an endless barrage of missiles.”

Eglash also discussed Federation’s financial support for Israel, emphasizing that aid is offered just hours after an attack.
Rabbi Seth Adelson of Congregation Beth Shalom said he was addressing the crowd as both a Zionist and the father of an IDF soldier. He called for communication between the two sides.

“Now is not the time for rest,” Adelson said. “Now is the time for talk. It’s time for bold leadership in Israel; brave, genuine leadership among the Palestinians who can see their way to a better future instead of cynical murderous tyranny.”

Congregation Poale Zedeck Rabbi Daniel Yolkut expressed his hope for Jews in Israel to put their children to bed without the fear of rockets, and that Jews around the world could find peace in their own neighborhoods.

Poale Zedek’s Rabbi Daniel Yolkut was one of the speaker’s at the Jewish Federation of Greater Pittsburgh’s We Stand With Israel vigil. Photo by David Rullo

Still, he said, “as the ceasefire takes effect in Israel, shalom — peace, such a central concept — remains elusive.”

Temple Sinai Rabbi Keren Gorban drew comparisons between her relationship as a child with her little brother and the dynamic between the Hamas and Israel. The difference, she said, is the millions of lives affected by the rivalry between the two.

“Millions of people who just want to live their lives in peace and safety bear the consequences of these fights,” she said. “Millions of Jews and Arabs, Israelis and Palestinians are terrorized.”

Naomi Kitchen, a senior at Allderdice High School who will be joining the IDF following graduation, spoke of the antisemitism teenagers are experiencing online and on various social media sites.

The Jewish teen said a friend of hers called Israel an “apartheid state” and “colonialist.”

“The voices spreading these lies are abundant and very loud,” Kitchen said. “It’s important now, especially now, that we counter these lies.”

Schiff spoke of the necessity for peace and of the work Israel has done to secure peace in the region.

He recalled the words of the priestly benediction, “that beautiful series of blessings that culminates with the prayer that peace should be established in our time. Let this be a Shabbat of shalom. Let it be a prelude to an age of shalom.”

The Federation event came 11 days after the start of Israel’s latest conflict with Hamas, and followed two community rallies organized by other groups. Several members of the Pittsburgh Jewish community took to social media to complain of the timing of the rally, the language used to promote the event and the location — Federation’s parking lot, instead of a more visible spot in Squirrel Hill.

Anat Talmy, one of those who expressed concern with some of the details of the rally, said she was pleased in the end that the vigil took place.

“I’m very happy,” Talmy said. “I would have rather it be on a Sunday when more people could come to a place where people could actually see us. I would rather it be in the Jewish community, and the hour is not great, but this is better than nothing.”

Laura Cherner, director of the Federation’s Community Relations Council, said Federation was responding to the community’s desire when it organized the rally.

“The community of Pittsburgh wanted to be together and offer support,” Cherner said. “I think it’s a perfect way to enter into Shabbat, to reflect and show solidarity with Israel.”

Cherner noted that antisemitism has been on the rise since the start of the conflict, and urged the broader community to listen to Jews when they express concern over certain words or phrases used online and in social media.

“If the majority of the Jewish community is saying it’s antisemitism, then the broader community needs to listen,” Cherner said. “I think it’s important to use your activism responsibly.”

On Saturday, May 24, an “Emergency Rally for Palestine” was held on Flagstaff Hill in Schenley Park. It’s promotional material carried the slogan: “From the River to the Sea Palestine will be free,” a rallying cry for the end of Israel as a Jewish state.PJC