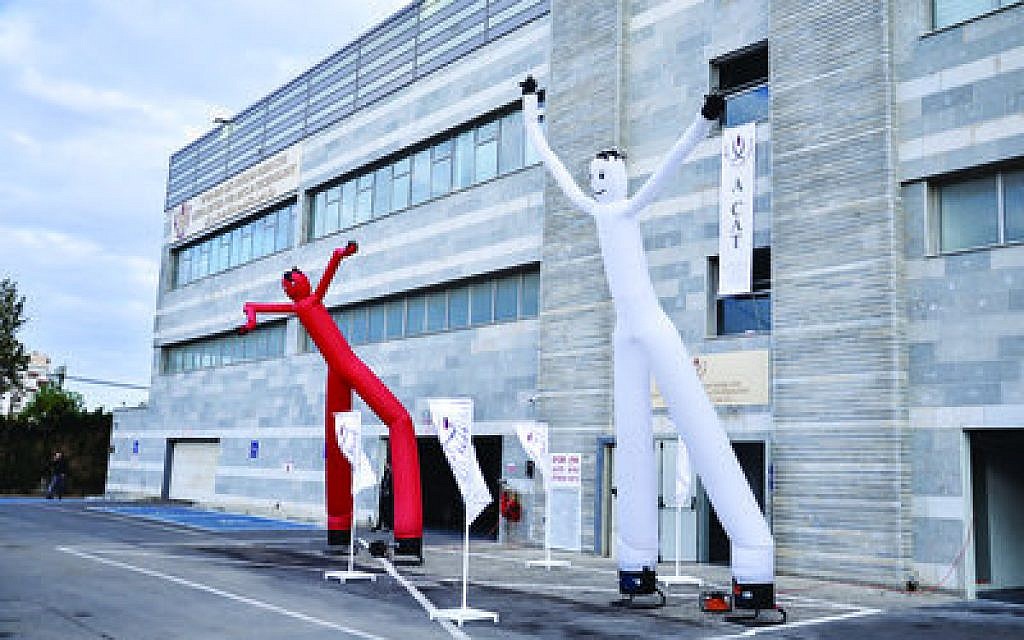 The 11,000 square-foot center is stunning and modern in design. Photo courtesy of Akko Center for Arts & Technology

Like so many others, I have watched the recent events in Israel and Gaza intently and with a great deal of sadness. Rockets hurtling toward Tel Aviv, Israeli and Palestinian deaths, and millions of lives placed on hold, paralyzed with fear.

After dozens of trips to Israel over the past 10 years, with the majority of my time spent in the northern mixed city of Akko (Akka to the Arab residents), I can’t help but view the troubling scenario through a slightly different lens than most observers. While I profess no particular expertise on the issues that gave rise to the conflict, I do have an intimate understanding of the relationship between Israel’s Arab and Jewish citizens — particularly in Akko, the mixed city that I consider my second home.

Along with my friend, Bill Strickland, in 2016 I founded the Northern Israel Center for Arts & Technology, known in Israel as the Akko Center for Arts & Technology (ACAT). ACAT is a replication of Bill’s realized vision of Manchester Bidwell Corporation, an arts learning center for marginalized Pittsburgh public school children as well as a career development school for under/unemployed adults. The positive outcomes of MBC have been so well documented that community leaders from across the U.S. have come to Pittsburgh to learn how they could replicate the success. There are now 10 MBC replications in cities across the U.S., all with similar outcomes as MBC.

It was important to me that the first international replication would be created in Israel, with a particular emphasis on instructing Israeli Arabs and Jews together in the same classrooms.

Here’s what we have found: When educating diverse populations — even cultures that seem at odds with one another — in a beautiful, art-filled, nurturing and respectful environment, individual differences become less important than the aspirations the students have for themselves.

After early reticence, the Arab and Jewish students inevitably begin to work cooperatively together. And individuals who have little familiarity — or even mistrust — of the others’ culture, sometimes become friends outside of class.

ACAT provides the raw materials for hope, an all-too-rare commodity for marginalized people. The results of the past five years have been a source of joy and pride for all of us and, most importantly, for the students. The outcomes have been successful beyond our expectations.

Early in the evening, Naim Obeid, CEO of ACAT, called to tell me that traffic was at a halt throughout Akko because of the intensity of young Arabs’ protests. Later, the streets surrounding his home, one block from Akko’s main thoroughfare, were on fire. The sounds of sirens and images of water cannons dispersing Arab youth were as frighting to Naim’s family as they were disheartening.

The next morning, traveling around the city on his motorcycle, Naim saw that our friend Uri Jeremias’ internationally regarded restaurant, Uri Buri, had been torched. Arab businesses were also vulnerable to the senseless destruction. Shattered windows. Scorched cars. My hotel of choice, a former Ottoman Empire building restored by a wonderful warm Arab family, was burned. The owner seemed broken, conceding to Naim that he did not have the strength to rebuild.

Our immediate reaction was: Could we have possibly been wrong? Were the successes of ACAT — helping people see each other as just people — an aberration, not replicable outside our four walls?

Then we both came to the same realization simultaneously: The premise upon which we built ACAT is not wrong. Rather, there are insufficient resources of the type that ACAT provides.

The poor in the Western Galilee, particularly the Arab communities, are faced with staggering challenges. Inadequate schools. Inadequate distribution of resources. No hope. Little to lose.

The difficulties of Arab citizens of Israel are often a blind spot to Israel supporters of otherwise good faith.
Israel’s security is, of course, a priority. And the plight of Palestinians is a concern for many. The conditions in which Israel’s Arabs, citizens of the State of Israel, live, with far too few exceptions, is not.

When individuals and communities live in darkness it is difficult for them to imagine the light and to have a sense of a larger community. Day-to-day survival is the overarching priority. And without hope and a sense of belonging to the larger public community, there can be no sense of inclusion.

At ACAT, diverse adults and teens experience a sense of belonging to the larger community. Students see that their fellow students from across town have similar problems, similar frustrations, a similar need to belong, and — to the extent they have them — similar dreams.

Exposure to beauty, and to people who care about the well-being of others, has proven in Pittsburgh, 10 U.S cities, and now Akko, Israel, to be transformational.

How many fewer teenagers would have been in the streets of Akko had programs such as ACAT touched more young lives?
While I am proud of what Naim, Bill and I built in Akko, it is really only common sense. We all have the need to have a reason to look forward to a meaningful future.

We all want a part of a dream to embrace.

Those deprived of hope have little to lose. PJC

Mark Frank is an attorney in Pittsburgh and the co-founder of ACAT.