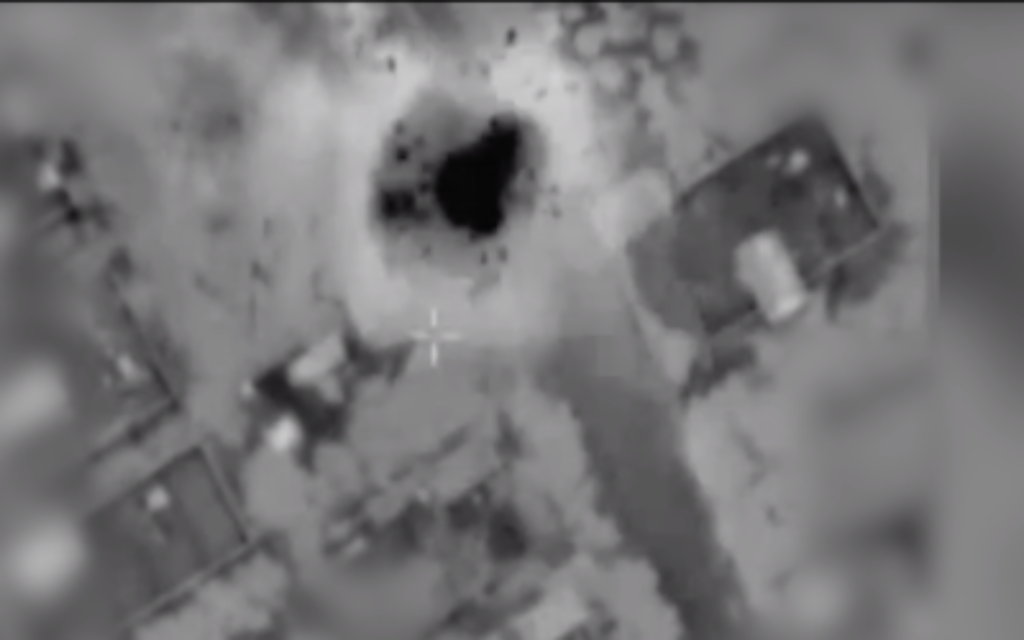 An IDF strike on a Hamas rocket launching site in Gaza on May 12, 2021. (Screen capture/IDF via The Times of Israel)

I am angry that Hamas, which wants me dead and my country dismantled, is able to attack again and again with impunity, at the time of their choosing, to inflict pain and suffering, and to shape the discourse between Israelis and the Palestinians, and now between Israeli Jews and Israeli Arabs.

When our cities are being attacked, Israelis killed, and our life upended, protocol requires that we concentrate on condemning the actions of our enemy and unite around our right to live and to be a free people in our home. I have accepted this protocol for most of my life. I remember as a tank commander, fighting in the 1982 Lebanon War, my anger at the protesters back home who were condemning the war. “Not now,” I shouted, as if I felt their delegitimization undermining the resolve I needed in order stay alive and get through the day.

Part of me still accepts this protocol. It is important for me to reaffirm that I know that this latest attack has nothing to do with the Damascus Gate, Sheikh Jarrah, or the police entering the Dome of the Rock mosque. Hamas brilliantly manipulated these events to grab hold of the mantle of Palestinian leadership from the PA, at the time when their ability to do so through the ballot had been denied them, due to the yet again postponed Palestinian election.

It is important to reaffirm the validity of the Israeli narrative that Hamas, like Hezbollah and Iran, will only be satisfied when the last Jew is either in the Mediterranean Sea or back in Europe “from where you came.” We are at war with an enemy devoid of basic moral standards, a terrorist organization for whom any suffering of their citizens is legitimate so long as some Jewish blood is spilled. For Hamas, victory is measured by the extent of pain they can extract, and not by any strategic advancement they achieve for their people.

The Israeli protocol demands that any criticism of Israel be postponed to tomorrow. I reject criticism that flattens the debate, and that blames Israel for Hamas’ actions. That said, we cannot allow protocol to stifle serious reflection and even self-criticism about the policies we enacted which, though they were not the cause of the missile attacks, nevertheless did contribute significantly to the effectiveness of Hamas’ move and to the violence between Israeli Jews and Israeli Arabs. History has shown us that when criticism is delayed until “tomorrow,” one often forgets, and one finds oneself aligned with the comforts of the status quo instead of one’s aspirations.

I am angry because we can do better.

We have accepted as a given that there is no peace partner, and consequently Hamas is no worse than the Palestinian Authority. This has allowed us to prop up Hamas with funds, solidifying their hold on Gaza, while constantly delegitimizing the PA, and denying them any successes. The PA are kosher as our “collaborators” working behind the scenes to prevent attacks against Israel, but they are not our partners in advancing the cause and rights of Palestinians. The partnership between the one-statists who believe that Israel must hold onto all of Judaea and Samaria because it’s ours, regardless of the circumstances, and those who in principle favor compromise but believe that peace is unachievable, has effectively handed the mantle of Palestinian leadership over to Hamas. We have created a self-fulfilling prophecy in which any progress is impossible — for now, we truly do not have a peace partner.

We have become so enamored with our power that we have forgotten the rabbinic teaching that the truly powerful is the one who knows to control its use. We can stop Palestinians from sitting on the steps near Damascus Gate. We can enter the Dome of the Rock at will. We have an abundance of stun grenades at our disposal. We can even hide behind legal arguments that allow us to expel dozens of Palestinians from their homes in East Jerusalem and settle Jews in their stead. We are, after all, the sovereign. We won the war and to the victor go the spoils. But what about the rabbinic teaching: Who is wise? He or she who is able to see what is to come.

The holy month of Ramadan is not the time to prove the extent of our control over Muslims, but to show our ability for self-control. It is certainly not the time to intervene with the worship and celebration unless under the most extreme conditions, conditions that were far from being met.

Since most Israelis believe that there is no peace partner, we have removed the peace process from our public and policy agendas. But why have we removed all discourse about our moral responsibilities toward the Palestinians from these agendas?
“We offered and they said no,” is the accepted narrative, and consequently all suffering they may experience is their own responsibility. Released from any responsibility, we are exempt from blame. Criticism of Israel is either antisemitic (when done by others) or betrayal (when voiced by fellow Jews).

We stand dismayed at Israeli Arab protests, bemoaning the loss of a decade of coexistence work. We feel betrayed by them for siding with Hamas, our arch enemy. And yet we have done almost no real scalable and sustainable work of coexistence. Job creation that will help the Israeli economy — yes. Coexistence, genuine respect, understanding where they are coming from and how they experience reality — no. We are after all the victors, and as such we control the narrative. We have allowed Israeli Arabs to live in a lawless autonomous zone founded on neglect. So long as they do not pose a security risk to “us,” they can kill each other at will.

There are parts of the narrative we cannot control. The reality is that with enemies like Hamas and Hezbollah, peace is impossible.

But I am angry that we are not striving to be better: smarter, more just, more hopeful, more visionary. I am angry because over and over again we choose narratives that contribute to our moral mediocrity and elevate a bad and unsustainable status quo. I cannot put this anger aside until tomorrow. Our destiny is to always have to pay a price for our existence. Our responsibility is to strive for greatness within this destiny. PJC

Rabbi Dr. Donniel Hartman is the president of the Shalom Hartman Institute and the author of “Putting God Second: How to Save Religion from Itself.” Together with Yossi Klein Halevi and Elana Stein Hain, he co-hosts the “For Heaven’s Sake” podcast. This piece was first published on The Times of Israel.