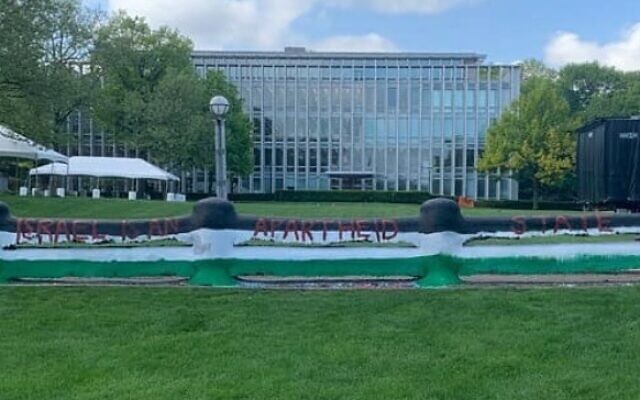 A message on the Fence at CMU on May 10, painted by the Muslim Student Association, read "Israel is an Apartheid State." (Screenshot from @cmufence)

The “Fence,” which sits in the middle of Carnegie Mellon University’s Oakland campus, has served as a rotating billboard of sorts for decades. It is most often used to advertise student organizations, parties and even marriage proposals. But on May 10, CMU’s Muslim Student Association painted the message, “Israel is an Apartheid State. Save Sheik Jarrah” on its walls.

Students need not seek approval from CMU to paint the Fence.

Images of the Fence with the anti-Israel message were posted that day on the Instagram account, @cmufence, which is student run and unaffiliated with the university. Comments on the post ranged from “am yisrael chai, Israel will never be defeated” and Israeli flag emojis, to arguments between Zionist and anti-Zionist students debating the meaning of the word “apartheid.”

The Muslim Student Association “had been privately discussing the events in Palestine and decided to paint the Fence,” the organization’s president, Aidan Place, told the Chronicle.

“It was something [MSA] wanted to do for a while but it felt taboo,” added Ali El-Sadany, a member of the MSA who helped organize the fence painting. “[They] decided now was the time to start a conversation.”

The day after the message appeared, Jewish students received an email from Jewish student leaders at CMU, addressing “the current conflict occurring in Jerusalem and the painting of The Fence.”

“After outreach efforts, thankfully we can share that the students who painted the Fence did not have antisemitic intentions,” the email said. “Many of us are hurting, due to both the ongoing tensions in Israel and the Fence’s message right on our campus. At the same time, we respect and acknowledge similar sentiments that others in the CMU community are experiencing.

“The Jewish community is here to support you during this time, whatever you may need,” the email continued. “We urge you to reach out to us with any questions, concerns, or needs, even if you would simply like to talk. Especially as the current conflict in Israel continues on, we are here to support you through these times. Our hearts are in Jerusalem, as we pray for peace and security throughout Israel and the region.”

Zachary Leventhal, president of AEPi, CMU’s Jewish fraternity, told the Chronicle that, prior to the ultimate frisbee group repainting the fence, Jewish student leaders “discussed reaching out to the Muslim Student Association to discuss a possible solution where both organizations could paint half the Fence together,” with messages side by side from each group. However, those Jewish leaders “were ultimately concerned that any effort to repaint the Fence could catalyze antisemitic harassment on campus.”

While CMU officials have not released a public statement regarding the anti-Israel message on the Fence, some members of CMU’s Jewish community did receive support from the administration.

“We very much appreciated the immediate and direct outreach from senior CMU administrators to Jewish students and Hillel JUC [Jewish University Center of Pittsburgh] to ensure that students were heard and supported,” said Dan Marcus, executive director and CEO of Hillel JUC in an email to the Chronicle. “Next semester we look forward to continuing to provide Jewish and non-Jewish students with a diverse array of Israel education and travel opportunities.”

Going forward, AEPi’s Leventhal said he “wants to see more of a dialogue between the Muslim Student Association and other Middle Eastern student groups and Jewish student organizations because it’s important for [everyone] to be able to have those conversations.”

The Muslim Student Association “has worked with Hillel in the past, mostly on interfaith events,” MSA’s vice president, Mansour Elsharawy, told the Chronicle. “So as long as one side is not dominating the issue, [MSA] would be willing to participate in a balanced discussion in the future.”

A CMU spokesperson could not be reached for comment prior to press time. PJC