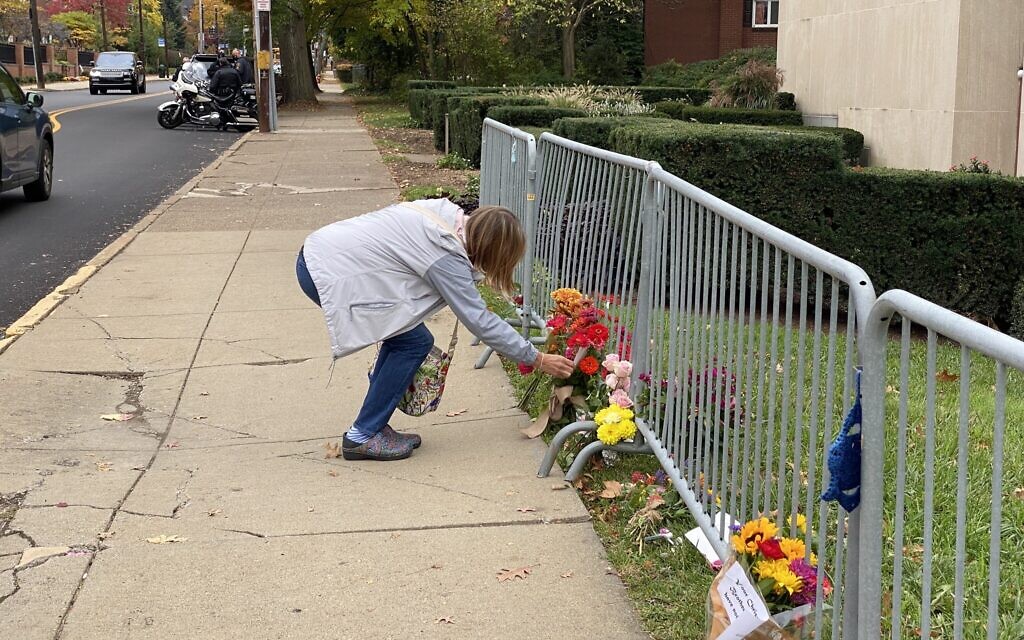 Person pauses to read a handwritten note left by the fence barricade outside the Tree of Life building. (Photo by Jim Busis)

On Thursday, May 20, President Joe Biden signed the COVID-19 Hate Crimes Act, which had been passed overwhelmingly by both houses of Congress. The act was a forceful response to the disgraceful attacks on Asian Americans by bigots who blamed them for the COVID-19 pandemic, which had originated in China. In passing the act, members of both parties in the House and Senate demonstrated that they can do the right thing, at least once in a while.

Nothing of the sort appears to be contemplated in response to the attacks by Palestinian sympathizers on Jewish-American persons, synagogues and restaurants during and after the latest Israel-Hamas conflict. In Los Angeles, pro-Palestinian attackers threw punches and bottles at diners at a kosher sushi restaurant. In New York’s heavily Jewish Diamond District, Palestinian supporters threw fireworks at Jews from a car amid a violent street altercation. Hamas supporters also beat a Jewish man in New York’s Times Square, sending him to the hospital with severe injuries. They threatened Jewish residents in a heavily Jewish Miami neighborhood. Video surveillance at Chicago’s Persian Hebrew Congregation, which was defaced by attackers, captured two people, one carrying a stick and another holding a sign that read “Freedom for Palestine.”

In each of these cases, and others elsewhere in the United States, the pro-Palestinian attackers had no idea whether their Jewish targets were supporters of Israel. Indeed, polls have shown that a majority of Jewish Americans support the creation of a Palestinian state alongside the state of Israel. No matter. Those who support the Palestinian cause attacked their victims merely because they were Jews. In so doing, they confirmed that their hatred of Israel extends to all Jews everywhere, as indeed Hamas has made clear in its own charter.

All told, the Anti-Defamation League has reported at least 200 possible antisemitic incidents in the United States since the onset of the fighting between Israel and Hamas. Nevertheless, despite the ongoing upsurge in attacks on Jews, especially against so-called visible Jews — that is, bearded Jews who dress in black suits, or merely Jews who will sport a small yarmulke or wear a star of David necklace — the leadership of the Democratic-controlled Congress has done little more than issue sympathetic tweets. As a body, Congress has done virtually nothing to condemn the attacks, much less legislate against them.

One reason for congressional inaction is that the pro-Palestinian attackers have the support of the so-called progressive Democratic Left. Democrats in the House have a five-seat majority, while the ultra-Left “squad,” which is blatantly anti-Israel and pro-Palestinian, now boasts six members. While Rep. Alexandria Ocasio-Cortez (D-N.Y.) at least has tweeted her condemnation of anti-Jewish attacks, several of her squad colleagues have not even gone that far. Not surprisingly, therefore, Speaker Nancy Pelosi (D-Calif.) cannot afford to alienate these progressives by pressing for legislation that would bring into sharper focus attacks on Jews by Palestinian sympathizers.

Another reason for congressional inaction is that Democrats are reluctant to criticize some of their own progressive legislators, even when the likes of Rep. Ilhan Omar (D-Minn.) issue blatantly antisemitic tweets. Indeed, in the aftermath of one such tweet, the House actually did consider a draft measure to condemn antisemitism. Nevertheless, under pressure from progressives, the Democratic House leadership watered the measure down so that in its final form it included not only antisemitism but also Islamophobia and discrimination against Latinos, Asian Americans, Muslims, Hindus, Sikhs, Pacific Islanders, Native Americans, immigrants and the LGBTQ community. That the resolution had been rendered entirely meaningless is evidenced by the fact that despite its having included Asian Americans, Congress recognized the need for separate — and meaningful —legislation that solely was geared to anti-Asian bigotry and hate crimes.

Democrats are fond of pointing out the cowardice of those of their Republican colleagues, who slavishly support Donald Trump and all that he stands for. They are right to do so. On the other hand, it is high time that Democrats showed some courage of their own. They should put an end to their own cowardly appeasement of an increasingly belligerent Left, and finally pass legislation, similar to that for Asian Americans, that would severely punish those who would verbally and physically abuse their fellow Americans simply because they happen to be Jewish. PJC

Dov S. Zakheim served as undersecretary of defense (comptroller) and chief financial officer for the Department of Defense from 2001 to 2004. He is vice chairman of the Center for the National Interest.

Reprinted with permission of the National Interest.