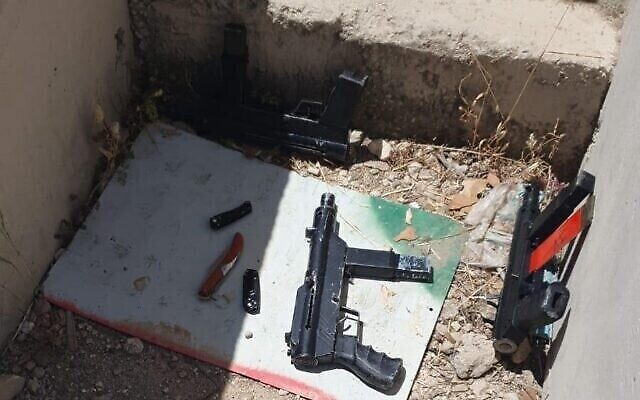 Three makeshift Carlo-style sub-machine guns and three knives were used by Palestinian attackers in an attack near a military base along the Green Line in the northern West Bank on May 7, 2021. (Photo via The Times of Israel)

Three Palestinians who opened fire at Border Police soldiers near a military base in the northern West Bank on Friday had initially planned to commit a “major attack” against civilians in central Israel, army and police officials said on Friday.

The three attackers, all in their early 20s, were traveling on a bus with illegal Palestinian laborers en route to central Israel, and intended to commit the shooting there, a security official said.

Forces had halted the bus near the border crossing between Israel and the West Bank as part of routine security efforts to stop illegal laborers from entering Israel. Shortly after, the three Palestinians got off the bus and opened fire at the soldiers.

“A major attack was prevented thanks to the sharp, determined and professional combat efforts of the border police officers,” said the head of the IDF’s Central Command Tamir Yadai, during a visit to the scene.

Yadai said forces had been on high alert and reinforced during the Muslim holy month of Ramadan.

“According to our assessment, you managed to prevent the terrorists from carrying out an attack inside Israel,” Police Commissioner Kobi Shabtai told the officers at the scene.

A security official told Army Radio that forces had foiled “a Sarona 2,” a reference to the June 2016 terrorist attack where gunmen opened fire on the upscale Sarona market and restaurant area in Tel Aviv, killing four people.

“The terrorists fired at the gate of the base. Border Police officers and an IDF soldier responded by firing and neutralizing the three terrorists,” police said in a statement.

Two of the attackers were killed and the third was critically wounded when officers on the scene returned fire. The injured attacker was taken by the IDF to the Emek Medical Center near Afula for treatment.

He was later transferred to Rambam hospital in Haifa, with very serious head injuries.

The official said there was no prior intelligence that the three planned an attack and they did not have a history of involvement in terror groups. Initial investigations indicated that the bus driver was unaware of their intentions.

They said two came from the West Bank village of Shuweika, while the third was from the city of Tulkarem

Aside from the makeshift Carlo-style submachine gun each assailant used, knives were found on each of their bodies.

Sergeant S. who led the force during operational activity outside the gate of the base said she and her soldiers identified three armed suspects running towards them, and opening fire.

“We loaded our weapons and grabbed cover as we responded with gunfire. During the gunbattle we heard bullets whizzing over our heads, she said, adding that she “hopes this will be the last event like this.”

The attack came amid rising tensions in Jerusalem, the West Bank and along the Gaza border. Police bolstered their presence in Jerusalem on Friday ahead of prayers to mark the final weekend of Ramadan.

It came a day after the funeral of Yehuda Guetta, a 19-year-old student who was shot in the head in a drive-by shooting attack at Tapuah junction in the West Bank earlier this week, and who died of his injuries on Wednesday night.

Additionally, tensions are high in the East Jerusalem neighborhood of Sheikh Jarrah where there have been ongoing protests over the last week as dozens of Palestinians are at risk of being evicted following a long legal battle with right-wing Jewish Israelis trying to acquire property in the neighborhood, just north of Jerusalem’s Old City.

The clashes have raised fears of sparking a wider conflict with the Hamas terror group and other factions in Gaza, warning of renewed violence over the issue.

On Thursday, the military wing of the Palestinian Islamic Jihad said Israel will be held responsible for “every drop of blood [that is] shed in Palestine,” a day after a 16-year-old Palestinian was killed in clashes with the IDF.

Echoing similar rhetoric, the armed wing of the Popular Front for the Liberation of Palestine (PFLP), another Gaza-based terror group warned Israel “not to test the patience of our fighters,” in a statement on Thursday night. PJC