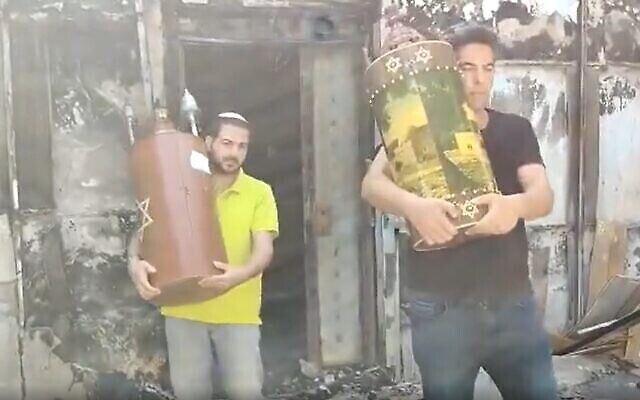 Lod residents salvage unharmed Torah scrolls from the ruins of a synagogue torched by Arab rioters, May 12, 2021. (Screenshot: Twitter via The Times of Israel)

Israel ordered a massive boost Wednesday morning to police forces deployed in cities with Jewish and Arab populations. The move came hours after a state of emergency was declared in Lod, where intense Arab rioting late Tuesday reportedly saw three synagogues and numerous shops torched, along with dozens of cars.

The rare emergency declaration in the central Israeli city prompted the urgent dispatching of several Border Police companies to work to restore order.

A state of emergency hands police officers more authority and freedom to operate in the locality where it was declared. They can close off areas of the city, enter any place to carry out their duties, and employ “reasonable force” to compel civilians to obey their orders.

Some Lod residents said power was cut in their homes and Molotov cocktails were thrown through their windows, Channel 12 news reported late Tuesday, and police acknowledged having to escort some residents from a community center to their homes as Arab mobs marauded in the streets.

The mayor, Yair Revivo, said City Hall and a local museum were also attacked, and compared the situation to the Nazis’ 1938 Kristallnacht pogrom. “Civil war” was breaking out, he said, lamenting that decades of coexistence efforts had collapsed.

Footage posted on social media showed a torched synagogue and two Torah scrolls being salvaged — unharmed — from its ruins.

Prime Minister Benjamin Netanyahu visited the city during the night to oversee the efforts to impose order and end the riots.

“I have been receiving updates all day on what is happening here in the city and I view it extremely gravely. It’s anarchy from rioters and we cannot accept it,” Netanyahu said.

The prime minister urged Lod residents to stay home and said he would impose a curfew if needed. “We will restore law and order with an iron fist,” he said.

Three Jewish men were arrested Tuesday over the fatal shooting of an Arab man during clashes Monday night. They were being questioned on suspicion of murder, while maintaining that the shots were fired in self-defense.

But an initial investigation indicated that the shots were fired toward a man standing dozens of meters away, and a court on Wednesday extended their remand by three days, with Judge Tal Aner saying the self-defense claim “doesn’t match the objective findings.”

On Wednesday, Public Security Minister Amir Ohana tweeted that the shooter’s arrest was “terrible.” Ohana said that had the matter been under his authority, he would order the suspect released immediately and recommended that police do so, because “civilians carrying weapons are helpful to authorities in immediately neutralizing threats or dangers.”

Arab violence erupted in numerous other cities across Israel, alongside reports of Jewish attacks, including in Lod, where a Muslim cemetery was set ablaze.

“We are seeing a situation in… [Jewish-Arab] cities that we have never seen before, including the incidents of October 2000,” Shabtai said, referring to widespread rioting that broke out among Arab Israelis at the start of the Second Intifada.

“I don’t feel safe exiting my home,” Lod resident Lior Benisti told Channel 12 news. “We wanted to go to my sister, we have two small daughters and we decided to stay in tonight even though we don’t have a rocket-proof room. Better take the risk of rockets than the mayhem outside.

“I’ve been living in the city for over a decade and unfortunately I predicted this would happen,” Benisti said, adding that after recent riots in Jaffa, “I said it was only a matter of time before this happens in Lod. I didn’t expect it to happen so soon.”

Before the state of emergency was declared, Hebrew media said several ministers had called for an urgent cabinet meeting to receive updates on the situation in Lod, but Cabinet Secretary Tzachi Braverman in response closed the cabinet’s WhatsApp group to new comments.

“Can someone update the cabinet ministers on what’s happening in Lod?” asked Ofir Akunis (Likud). “I am asking for the cabinet to convene to get updates on all fronts.”

Pnina Tamano-Shata (Blue and White) said: “Difficult images. The mayor is helpless. It would be nice to get an official update for the cabinet.”

Likud’s Gila Gamliel said the declaration of an emergency situation “necessitates an update to the cabinet about how this anarchy will be prevented… What about having the army enter Lod?”

But in response, Braverman simply closed the WhatsApp group to new messages and wrote: “The group has been blocked.”

“In the midst of the popular outburst of understandable anger, we are beginning to see that things are developing in very dangerous directions, as peaceful popular demonstrations have turned into direct clashes which threaten the lives and safety of our youth,” the Islamist party leader said.

“I ask you all to assume responsibility, act with wisdom, abide by public order and the law, and preserve your life and the lives of all citizens without exception,” he added.

The Arab-Jewish Hadash party, the Joint List’s largest single faction, also called for an end to violence and the restoration of calm but criticized the deployment of Border Police forces to restore order.

“We support joint demonstrations by Jews and Arabs, against the occupation and the attack on Gaza, but resolutely reject the attempts to lynch, burn property and houses of worship, and any harm to civilians, Jews and Arabs,” Hadash said.

But, the party added, “We reject the introduction of border forces, whose anti-Arab tendencies are known, into Lod. This can only lead to escalation.”

Alongside the clashes within the city, two Lod residents were killed overnight in a direct rocket strike from Gaza on a vehicle in the city’s outskirts.

Khalil Awwad, 52, and his 16-year-old daughter Nadeen Awwad were killed, and his wife was seriously wounded, in Dahmash, an unrecognized Arab village just outside Lod with a population of 800.

It was a direct hit by terrorists in Gaza, part of a major flare-up that has seen more than 1,000 rockets launched at Israeli civilians — including hundreds directed at Tel Aviv and other central Israel cities — in a day and a half of fighting.

Police called on people to remain near bomb shelters.

“Hamas missiles do not differentiate between Jews and Arabs,” Lod’s mayor Revivo said.

He also appealed to Arab residents to end the protests and called for calm in the city. “The day after, we will still have to live here together.” PJC