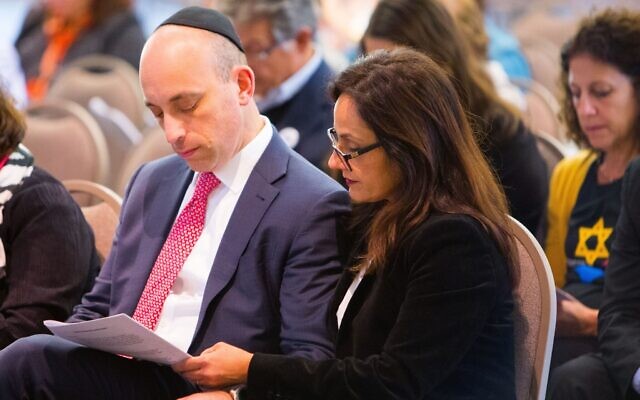 ADL CEO Jonathan Greenblatt and his wife Marjan Keypour Greeenblatt on Oct. 27, 2019, at Soldiers & Sailors Memorial Hall in Pittsburgh to commemorate the massacre at the Tree of Life building. (Photo by Sean Carroll/ADL)

There has been a “dangerous and drastic surge” in antisemitism in the U.S., and around the world, in recent days linked to the fighting between Israel and terror groups in the Gaza Strip, the Anti-Defamation League said.

In preliminary data revealed late Thursday, just before a ceasefire went into effect, the watchdog group said it had tracked an increase in online and real-world incidents of antisemitism in the United States.

“As the violence between Israel and Hamas continues to escalate, we are witnessing a dangerous and drastic surge in anti-Jewish hate right here at home,” says ADL CEO Jonathan Greenblatt.

“It’s happening around the world— from London to Los Angeles, from France to Florida, in big cities like New York and in small towns, and across every social media platform.”

The ADL said it has documented antisemitism on Facebook, Twitter, TikTok and Instagram, with messages including explicit praise for Hitler, promoting tropes about Jewish control and demonizing all Jews.

The group said extreme antisemitic and anti-Zionist content can be found across a wide variety of channels calling for the destruction of the Jewish state, including posts that state: “GAS THE KIKES RACE WAR NOW.”
Demonstrators hold placards as they march in support of Palestine in front of the White House in Washington, DC, on May 20, 2021. -(Photo by Daniel SLIM / AFP)

The ADL says it has also received more reports of possible antisemitic incidents since the conflict broke out in Israel, with 193 reports in the week after the crisis began, up from 131 the previous week.

A group of about 20 pro-Palestinian demonstrators chanted “Intifada!” and “From the river to the sea, Palestine will be free” across the street from the Temple Beth Israel synagogue in Skokie, Ilinois, the ADL said.

In the two most high-profile incidents, Jews were attacked in Los Angeles and in New York by mobs of anti-Israel protesters.

Authorities are investigating one of the incidents as a possible hate crime.

In an altercation Tuesday night recorded on video, a group of men waving Palestinian flags attacked diners at a sushi restaurant in the neighborhood of Beverly Grove, throwing punches, bottles and other objects. The diners included a group of Jewish men.

Another man at the scene, who was not Jewish, told the local CBS affiliate that he and his group also were attacked and that he was pepper-sprayed when he tried to defend the group. He added that the attackers used antisemitic language to determine who at the restaurant was Jewish.

Witnesses said 10 Palestinian cars rolled up and started hitting them with knives at a Sushi restaurant in Beverly Hills#israelunderfire pic.twitter.com/i1Au9sOEIh

In an incident Monday night recorded by a security camera, an Orthodox Jewish man was chased by a caravan of Palestinian supporters. He escaped unharmed.

Similar scenes were reported from New York on Thursday.

In one attack, one person was burned when two fireworks were thrown from a car amid an altercation with anti-Zionist protesters in a heavily Jewish New York City business district, according to police.

The fight in New York City occurred around the same time as a pro-Israel demonstration on Thursday in New York City that also attracted pro-Palestinian counter-protesters. It took place in the Diamond District, a midtown Manhattan street with many Jewish-owned businesses.

In two videos posted to Twitter on Thursday, a group of men wearing the colors of the Palestinian flag can be seen yelling “f–king Zionist” and similar expletives while holding a Palestinian flag. At the beginning of one of the videos, someone appears to be lying on the ground.

Altercations with the pro-Palestinian protesters were seen in several locations around the city, including a mob attacking diners at a restaurant.

These are not Palestinian terror supporters. These are actual terrorists on the streets of New York City. Attacking diners for one reason. They’re Jewish. pic.twitter.com/mVrhIh8mCc

“There’s no excuse for violence against someone because of who they are. None. We will bring the perpetrators of this vicious act of hate to justice.”

The Israeli Consulate in New York on Friday said the wave of protests was more violent than previously seen in the area, even when tensions were high.

“The demonstrations are larger, more toxic, and unfortunately also more violent. There is a direct connection between Hamas’ stated agenda which is sworn to Israel’s destruction and the slogans of the demonstrators that undermine the legitimacy of Israel as the Jewish nation-state,” the consulate said in a statement. PJC