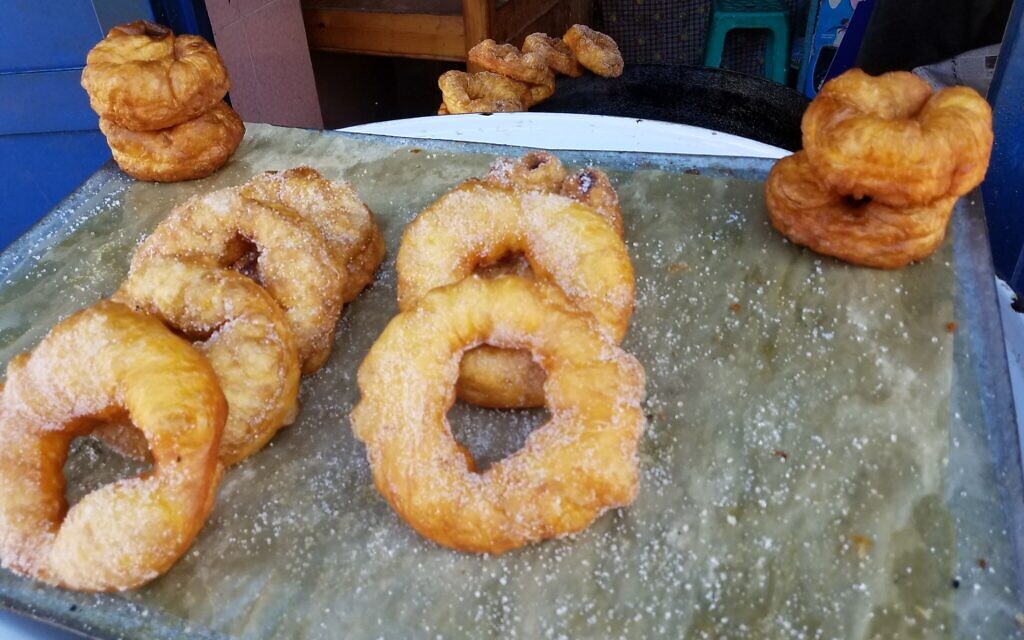 S’finj are Moroccan rings of fried dough that are light and spongy. (Photo courtesy of Aliza Green)

In fact, the Hebrew “sufganiyot” rolls off the tongue much more smoothly. But each word conjures the same culinary meaning: enriched dough stuffed generously with filling and fried to golden-brown perfection.

Around this time of year, whatever you call these fried confections, consuming them is a mitzvah, their hot oil bath representative of the oil that sustained the lit menorah for eight days, instead of one.

The ideal sufganiyot, according to Philadelphia-based food writer Aliza Green, is fried in fresh, clean oil, yielding a puffed, yeasted dough that is both light and airy but with a chew.

“It’s kind of contradictory, but that’s what makes it really delicious,” she said.

U.S. Jews are mostly purists when it comes to sufganiyot, Green said, preferring classic flavors year after year. She enjoys the fried bread’s richness cut with the acidity of strawberry or raspberry jam, as is traditionally found in U.S. bakeries through the month of Kislev.

Though a familiar confection in the U.S., jelly doughnuts emigrated — as many Jews did — from Germany and Poland, where a more savory and lean dough (sugar and milk were too expensive to use for an enriched dough), was stuffed with meat, fish, mushrooms or cheese, Gil Marks wrote in “The Encyclopedia of Jewish Food.” In Polish, they were called paczka or paczki; in Yiddish, they were ponchik or pontshke.

Though Eastern and Central Europe may be the birthplace of what we recognize today as a jelly doughnut, fried dough enjoys popularity around the world and has deep roots in Sephardic traditions.

Evidence of this is in the popularity of sufganiyot in Israel — 45% of the population is Mizrahi or Sephardi according to Israel’s Central Bureau of Statistics — where variations of the filled doughnut are much more common than in the U.S. This is also due to the abundance of potatoes in the U.S. that inspire another Chanukah dish, taking the spotlight away from sufganiyot.

“We’re really more of a latke country than a sufganiyah country,” Green said.

Sufganiyot gained renown in Israel in the 1920s, when trade union Histadrut advocated for the production of the difficult-to-make sufganiyot over rudimentary latkes, to provide enough work for their laborers.

In Israel, sufganiyot are filled with milk caramel dulce de leche and chocolate or vanilla pastry cream. Halva and coconut flakes decorate the tops of the doughnuts, Green remembered, taking inspiration from across the region.

In Northern Africa, Moroccan Jews favor s’finj — a light, spongy ring of dough — on Chanukah; Tunisian Jews eat yo-yos, cakier fried rings soaked in orange blossom syrup and topped with crunchy pistachios bits.
Fritters are common in Jewish cuisine in Italy, too, with each pocket of the country having a variation on the doughnut.

In the Tuscan town of Pitigliano, known before World War II as “Little Jerusalem” because of its robust Jewish population, frittelle di Hanukkah was a common diamond-shaped fritter, dough flecked with raisins, chopped figs or anise seeds, Green said.

Green also has a recipe for sebadas, Sardinian pastries stuffed with tangy cheese and drizzled with honey that she makes for Chanukah, shared below.

With its versatility and affordability, fried food is beloved across the world.

“If you think about it, is there any cuisine in the world that you can come up with that doesn’t have fried food?” Green said.

However, doughnuts, regardless of the form they take, are no more celebrated than they are on the Festival of Lights.

Sardinian sebadas from “Starting with Ingredients: Baking” by Aliza Green

Make the filling: Combine the ricotta, goat cheese, lemon zest, eggs and sugar in a mixing bowl and blend well. Set aside.

Make the dough: In the bowl of a standing mixer fitted with the whisk attachment, combine the all-purpose flour, bread flour, semolina and salt.

In a separate bowl, whisk together the milk and butter. Pour the mixture into the flour mixture, change to the paddle attachment and beat until a ball of dough forms. Beat 1 minute longer, or until the dough is smooth, wrap well and chill for 1 hour in the refrigerator or 30 minutes in the freezer.

Using a pasta machine dusted with flour or a rolling pin on a flour-dusted work surface, roll the dough out to less than ¼-inch thick. Cut 5-inch diameter circles from the pastry. Spoon about 2 tablespoons of the filling onto half of the dough rounds, leaving a ½-inch border around the filling. Brush the border with water and then cover with a second dough round. Press the edges of the dough rounds together firmly to seal.

In a wok, a large cast-iron frying pan or an electric deep-fryer, heat the oil to 365 F, or until shimmering hot and the air about 3 inches above the oil feels hot. Place the pastries, one at a time, in the oil without crowding, and work in batches if necessary. Fry until light brown and crispy, about 4 minutes. Scoop from the oil, drain on a wire rack, and keep warm in a 200 F oven while you fry the remaining sebadas.

While the sebadas are still warm, sprinkle them with powdered sugar, drizzle them with honey and serve immediately. PJC