Pittsburgh Mayor Bill Peduto thanked the Jewish community for supporting his decades-long political career and said he hopes to continue the relationship for another 4-year term.

Peduto’s comments were made during an April 29 conversation with Laura Cherner, director of the Community Relations Council of the Jewish Federation of Greater Pittsburgh. The 70-minute dialogue, which was the second in a series of Federation-hosted talks with Pittsburgh’s mayoral candidates, addressed Peduto’s desire to seek a third term as mayor, efforts to create equity in Pittsburgh and Peduto’s position on the Boycott, Divestment and Sanctions movement against Israel.

“My goal is simple. I’m running one last time to finish the job that I started and to be able to hand off to the next mayor a city that is greater than at any time it has been in my time on this earth,” he said.

According to Peduto, completing “the job” involves bolstering equity, opportunity and sustainability throughout the city, and ensuring that Pittsburgh is on track to achieve various goals by 2027.

“We’re well on our way of having a city where every child has the opportunity for pre-K education, where our water system is not only a modern system for the next 50 years, providing us with clean publicly owned water, but a smart system as well that is meeting goals of energy conservation, [and] that we meet all of our goals of climate change,” he said.

Similarly, in the coming years, the hope is to have a park within a 10-minute walk of every Pitttsburgher and to create new opportunities for affordable housing. Peduto said these efforts will largely be achieved through the One PGH plan, an effort to foster partnership between the city’s nonprofits, corporate community and largest philanthropies.

Between UPMC, Highmark, Carnegie Mellon University, and the University of Pittsburgh, $115 million dollars will be contributed, during the next five years, to building a more equitable city, said Peduto.

Cherner followed up on Peduto’s description of the One PGH plan by asking the mayor to describe his administration’s efforts to bolster racial equity within the city.

Peduto replied that even prior to the 2020 demonstrations, Pittsburgh was a national leader in addressing equity. Through the city’s Office of Equity — the fifth of its type to be established nationwide — systemic inequities are analyzed and recommendations are issued.

Peduto said the Office of Equity relies on best practices and adopts a comprehensive view.

“Much of the conversation in equity is based around disparity in housing, disparity in education, police/community relations, and those are the ones that get the most attention, but what leading cities understand is that equity affects everything,” said Peduto. “It’s 50 years of red line through banking that prohibited people to be able to start their own business or own their own home, which denied the ability to break out of cycles of poverty and to create wealth. That is an issue of equity. That is why we’re now partnering with our banks to put the money into the neighborhoods that had been left behind before.” 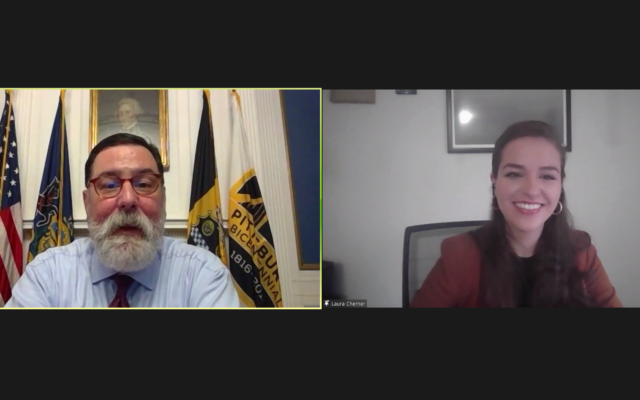 Similar to last week’s conversation with mayoral candidate and State Rep. Ed Gainey, Cherner posed both her own questions and those submitted by viewers. Following an audience-submitted query, Cherner told Peduto “some groups support the Boycott, Divestment and Sanctions Movement as a way to put economic pressure on Israel” and asked the mayor about his views on the BDS movement.

“I don’t support it,” said Peduto. “The far left has this agenda that basically wants to be able to recognize Palestine but has an anti-Zionist side — it doesn’t recognize the Jewish world to have its own state. And so when they push this agenda what they’re doing is they’re basically saying…Palestine should have its own state, that Israel should be criminalized and that the world should gather around like we did in South Africa with apartheid in order to be able to make that happen. But what they don’t say is Israel should have its own state, and they refuse to say that.”

Peduto acknowledged that “looking at world affairs, that’s a little bit higher than my pay scale as a mayor. But I’ve been to Israel. I drove by the West Bank. I have been to Tel Aviv…and I’ve been to Jerusalem, where the respect between each of the different religions is present on a daily basis. I don’t know what Israel’s solution will be. I tend to believe that there can be a two-state option.”

Peduto said that in his position he’s had to keep activism at arm’s length.

“As a mayor you can’t be an activist. You have to be a mayor. There are two completely different jobs, and they are mutually exclusive. A mayor has to be a pragmatist,” he said, and even though one should fight against parties who seek to strip constituents of their rights, government officials have other responsibilities.

“At the end of the day, the garbage has to be picked up Monday morning,” he said. “When that light turns green, you have got to assure the people those other lights are red. And when you wake up in the morning and your kid is brushing their teeth, you have to ensure that the water that they’re drinking is clean. You don’t get to be a representative, or a counselor, or Congress member and just pontificate about ideas.”

Peduto said that from his early days decades ago as District 8 Councilperson Dan Cohen’s chief of staff until now, he’s worked to build relationships and improve the quality of life in Pittsburgh’s neighborhoods.

He thanked the Jewish community for supporting him throughout his career and closed by tearfully addressing the Oct. 27, 2018 attack at the Tree of Life building.

“The trauma of 2018 was real. It affects me to this day. Those were my friends too,” he said. “I still have some work to do, and I really hope to get the support in order to be able to finish the job.

“I love my job. I hate politics, and I wish there was a better way to apply for this job than the meat grinder process that we have to go through,” Peduto said.

A final Federation-sponsored conversation is scheduled with mayoral candidate Mike Thompson on May 13. Information is available at jewishpgh.org/crc. PJC