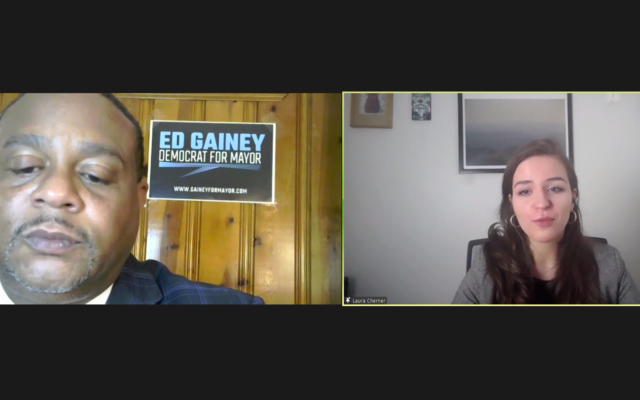 Gainey’s comments were made during an April 22 conversation with Laura Cherner, director of the Community Relations Council of the Jewish Federation of Greater Pittsburgh. The hour-long dialogue, which was the first in a series of Federation-hosted talks with Pittsburgh’s mayoral candidates, addressed Gainey’s platform, white supremacy and his stance on the Boycott, Divestment and Sanctions movement against Israel.

In 2013, Gainey was elected to represent Pennsylvania’s 24th District, which includes neighborhoods in East Liberty, East Hills, Homewood and Lincoln-Lemington, as well as Wilkinsburg, an Allegheny County borough. “Since then, I’ve been fighting for justice,” he said. “That’s the name of the game for me: justice. Whether that’s criminal justice, social justice, ethnic justice, whatever justice we can to create a fair nation, a fair state, a fair region, that’s what it’s about.”

Gainey said the May 18 Democratic primary offers an opportunity to address disparities in housing, policing and gender equity.

“I’m running for mayor because I want to see one Pittsburgh,” he said. “I want to live up to the creed of being ‘America’s most livable city.’” 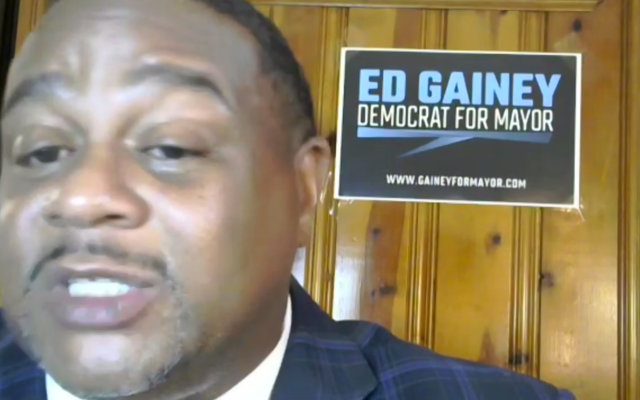 Throughout the evening, Cherner posed prepared questions and those submitted by viewers. She told Gainey the April 22 conversation was “an opportunity for the Jewish community to engage with you as a candidate,” and then referenced the Oct. 27, 2018, shooting at the Tree of Life building.

“As mayor, how do you plan to address white supremacy and other forms of extremism and keep our community safe?” she asked.

“What happened at the synagogue that day was horrible,” said Gainey. “There’s no words that can explain it. Any type or level of hate is just horrible and when it rears its ugly face we have to do something about it. We have to do things that’s going to protect our city.”

“The thing with racism is that you can’t legislate hate out of nobody’s heart,” he said. “You can’t.”

Gainey noted an increase in white supremacy groups and questioned why greater surveillance hasn’t been adopted. He also called for the firing of police officers who discriminate based on gender identity, racial identity or religious identity.

“Whenever hate rears its ugly head we have to be ready to speak up and stand as a city,” he said.

Gainey cited local demonstrations following the shooting at the Tree of Life building and last summer’s murder of George Floyd as helpful in eradicating racism.

The commonality between the demonstrations, said Gainey, was “people were protesting in the name of LGBTQIA justice, Black lives justice, social justice, criminal justice — the common word was justice.

“Two major events that everybody came together and wanted justice,” he continued. “We shouldn’t push that away. We should embrace it because that teaches our young people about justice.”

Addressing a question submitted by a viewer, Cherner told Gainey “some groups support the Boycott, Divestment and Sanctions movement as a way to put economic pressure on Israel,” and that, “historically, Pittsburgh has engaged in economic partnership with Israel.” Then she asked Gainey his views on the BDS movement.

“I can’t say that I know everything, but what I can say is that I’m willing to learn as much as I have to learn in order to do what’s necessary to improve business relations to improve the climate,” he added.

He praised the Jewish community for its historical support of social justice causes.

“We’ve turned to you when you helped us form the NAACP,” he said. “Without Jewish leadership there wouldn’t be a NAACP. We understand what happens when we're working together. My promise to you is that I’m willing to work together with you to ensure that we address the things that need to be addressed to help it grow.”

Additional Federation-sponsored conversations are scheduled with Pittsburgh Mayor Bill Peduto on April 29 and mayoral candidate Mike Thompson on May 13. Information is available at jewishpgh.org/crc. PJC