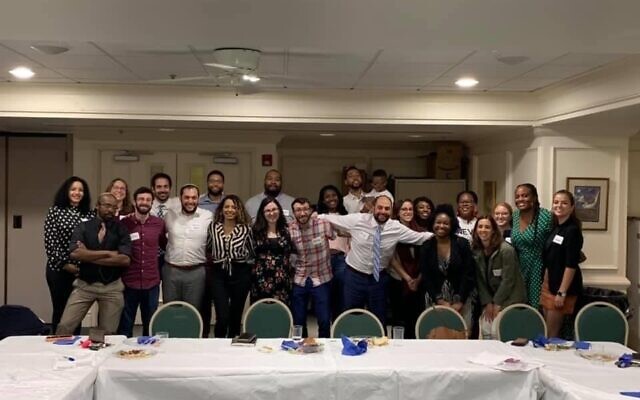 The 412 Black Jewish Collaborative’s board of directors is striving to build relationships between the two communities. Photo provided by Josiah Gilliam.

Before the deaths of Antwon Rose and George Floyd, Josh Sayles was part of a collaborative created to engage the Jewish and black communities in Pittsburgh with each other.

“We’ve known for years that we really needed to strengthen ties with the black community,” said Sayles, director of the Community Relations Council of the Jewish Federation of Greater Pittsburgh. “A few weeks after October 27 [2018], we were getting the same message from our black partners over and over again: ‘It’s really great that the Jewish community is getting everything they need in wake of the shooting, but we have young black men dying in the streets of Pittsburgh several times a week and no one is doing anything for us.’ That dichotomy caused us to act.”

In April, 2019 Sayles, along with two young black leaders and two young Jewish leaders took part in a Jewish Council for Public Affairs mission to some of the most important cities in the civil rights movement including Atlanta, Georgia; Birmingham, Alabama; Montgomery, Alabama and Selma, Alabama.

The 412 Black Jewish Collaborative grew out of that mission.

“Through that experience and getting to know one another, we all became friends,” Sayles said, “and each invited another person to join the group. We formed a board and built the 412 Black Jewish Collaborative from the ground up.”

The 412’s mission is to catalyze and elevate relationships between black people and Jewish people in Pittsburgh.

The organization “came together really organically,” according Josiah Gilliam, a 412 board member and the coordinator for the city of Pittsburgh’s My Brother’s Keeper. Gilliam also serves on the board of the nonprofit PUMP, which works with young people in Pittsburgh to foster change in the community.

“We got together for a bite to eat and had meaningful conversations about life in Pittsburgh,” Gilliam explained. “We realized, OK, there’s a there there. What would this look like a little more formalized?
There is an extraordinary shared history between the Jewish community and the black community here in Pittsburgh.” 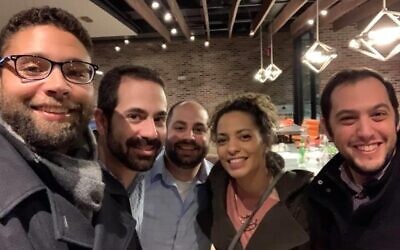 “There was a sign – I’ll never forget – when we were walking through the Equal Justice Initiative in Montgomery that read, ‘No dogs, No Jews, No blacks,’” recalled Temple Ohav Shalom Rabbi Jeremy Weisblatt. “It’s important for us to take steps together, to be allies and partners.”

Rabbi Jeremy Markiz, director of Derekh and Youth Tefillah at Congregation Beth Shalom, said the word “collaborative” has special meaning for the 412.

“It’s not about one community speaking over or to another community,” Markiz explained. “It’s really about multiple, overlapping communities speaking together. That’s why the word ‘collaborative’ is important.”

Both Markiz and Weisblatt are board members of the new organization.

The group originally planned to introduce itself to the Pittsburgh community with a series of happy hours, but the pandemic prevented that from happening. The 412 decided to wait until the coronavirus crisis ended to reschedule its public launch but the killing of George Floyd and accompanying protests led to a change in plans.

On June 4, the 412 issued a statement on social media. It condemned the murder of Floyd, as well as others in the black community and asked supporters to follow its page. Since that time, the group has posted educational opportunities, blogs, statements of support from other groups, information about peaceful protests and lists of black-owned businesses.

Gina Winstead is a board member with the 412. She is also the director of membership engagement and director of diversity and inclusion for the Pittsburgh Technology council, and vice president of Women in Technology Pittsburgh. She knows the importance of fostering understanding between different communities.

Winstead was recently the victim of a “verbal racial attack” in a Pittsburgh neighborhood. “I was only able to get out of that situation because upstanders came and thwarted this guy,” she said.

“How do we teach other Jewish people to be upstanders and how do we teach the black community to respond when they see someone being bullied for their Jewish faith or identity?” she asked.

For Winstead, as well as other members of the 412, the answer lies in relationships that outlast current events.

“It’s so valuable to be in relationships with people who are different than you, have different experiences than you and people with whom you actually share a great deal,” Markiz explained. “I think the 412 BJC is about providing opportunities for us to spend time together.”

Relationships between the two communities currently are not as strong as Winstead believes they should be.

“I think we’re trying to do some work building the human story, humanizing these experiences both of our communities seem to be suffering from,” she said. “I see an opportunity for our group to come together as an alignment between potential allies because we are experiencing some similarities and being oppressed.”

The 412 is “about showing solidarity between the black and Jewish communities,” Sayles said. “It’s about acknowledging one another’s pain and shared history and oppression and culture. It’s about creating greater understanding of our two communities in Pittsburgh.” PJC