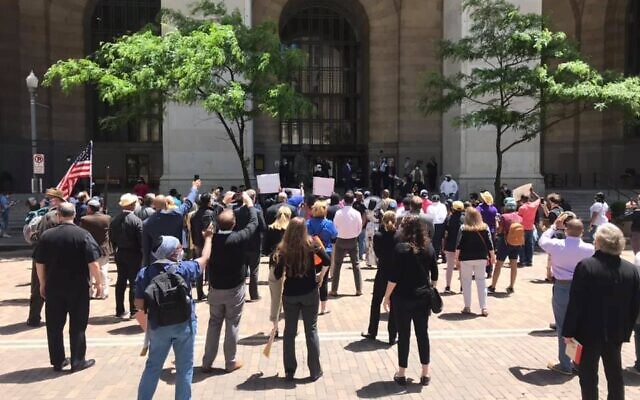 In the wake of the death of George Floyd during his arrest by four Minneapolis police officers, Jewish Pittsburghers have expressed outrage and solidarity with the black community by attending protests and vigils, creating learning opportunities and working to find other ways to show their support.

Since Floyd’s death on March 25, Rabbi Ron Symons, director of Jewish Life at the Jewish Community Center of Greater Pittsburgh, has attended protests downtown and in East Liberty.

“With the murder of George Floyd, once again, we have uncovered the ugliness of racism, of institutional racism, of systemic racism, of police brutality,” Symons said. “We have a responsibility to not just have this one be the ‘next one’ but be ‘the one’ to move the nation.”

It is important to participate in peaceful protests even though, “it’s not without anxiety that we do things like come together in large crowds for moments that we hope are peaceful but might turn violent. It’s about peaceful protests and the right to free expression,” said Symons, who directs the JCC’s Center for Loving Kindness.

For the last three years, Symons said, the Center for Loving Kindness has been engaged in conversation about privilege and “how it impacts our neighbors and how we redefine the term ‘neighbor’ from geographic terms to a moral concept.”

“Self-education” is a first step individuals can take to learn about “systemic racism and white privilege,” Symons suggested. “A second step is to just acknowledge the people in our lives who are not like us and how difficult this is for them.”

The 412 Black Jewish Collaborative, created in 2019, has been working to catalyze and elevate black and Jewish relations in the Pittsburgh region. Its funding comes from the Heinz Endowments and the Pittsburgh Jewish Community Foundation; the Jewish Federation of Greater Pittsburgh’s Community Relations Council is its fiscal agent.

The organization officially went public on June 4, 2020, when it issued a statement on Facebook calling for solidarity between the two communities. Since then, it has suggested reading material, published a list of black-owned businesses to support, promoted peaceful protests and posted links to important news articles.

While the Collaborative was not created as a reaction to Floyd’s death, the organization’s board came “together as friends and colleagues and is saying, ‘we can’t wait any longer, we need to do something now,’” said Josh Sayles, director of the Federation’s Community Relation Council.

Sayles hopes that the reaction to Floyd’s death will “stay in the news cycle long enough to create substantial structural changes, but even if it doesn’t, I promise you, we will still be here and doing this work for years.”

412 board member Gina Winstead explained that the organization has been working to figure out “how we can support and listen to each other in a more intimate way, so the initial response is something more closely resembling empathy than indifference.”

Like Symons, Winstead believes that education is an important tool so that people will be more familiar with “systematic racism and unconscious bias and privilege and the lived black experience.”

“That’s really difficult,” she said. “Having someone buffer those requests can help. That’s what we want the 412 to do. Rather than ask your black friends how to help, we can be a landing spot to help people learn how to engage.”

The Pittsburgh Jewish community is filled with “passion and a desire to do whatever we can to help the black community,” said Bob Silverman, who chairs the Federation’s Community Relation Council.

It’s important, he explained, “for us to listen and respond to what they want us to do. That’s a very important part of the equation.”

The South Hills resident hopes that Floyd’s killing may be an inflection point from which real change can occur.

“It’s not just one city where these senseless acts of violence have occurred, where there have been protests,” Silverman said. “It’s happening in every state and other countries and isn’t dissipating. It didn’t dissipate when all four of the officers were charged. I feel and hope people are going to build on this. It’s inspiring to see the young people out there protesting.”

The 10.27 Healing Partnership, founded after the shooting at the Tree of Life building in October 2018, also has been advocating for change, according to Maggie Feinstein, that organization’s director.

“The Jewish community said to us from day one, ‘You must respond to hate-induced violence not just from 10/27,’” she said. “I think it’s important for us to recognize that violent crimes based on race, ethnicity and gender identity are uncalled for and we really have to stand up and stop them.”

The Jewish community has “had a front seat to what this feels like,” Feinstein continued, but noted that “we don’t know what it feels like to happen as frequently or without a name or without an obvious place in history. It happens all the time.”

The 10.27 Healing Partnership’s resources are available to anyone that needs them, Feinstein said, even while social distancing because of COVID-19.

“We’re holding what we call ‘Canopy Conversations’ for people that feel the need to connect to a live person,” she explained. “We have a staff member who will be outside the JCC under a tent three days a week and anyone is welcome; anyone who is experiencing pain, sadness, anger and wants to talk with someone.”

In addition to in-person conversations, the center has content available online, including meditation and mindfulness tools.

Community Day School also has been active in responding to Floyd’s killing. The Jewish day school changed its Facebook profile photo to an all-black image on Tuesday, June 2 as part of “Black-Out Tuesday” on social media.

The school’s educators and counselors are using “Jewish values” to support students by “offering opportunities to think critically about what is happening,” according to Jennifer Bails, director of marketing and communications at CDS. Resources, including articles, books and videos are being shared with students. And, a virtual event titled, “Voices of CDS” is being created for students in grades 4 through 8 to “continue learning and explore ways they can take action to work toward racial equality and pursue a more just world.”

For Symons, the answer lies within the individual.

“It’s a painful, painful time,” he said. “We’re going to dissipate that pain through our ability to bring healing and wholeness to the world. It starts with one conversation, one awareness of ‘Oh, I didn’t know that was offensive.’ One awareness that I can reach across my comfort zone and understand who you are.” PJC