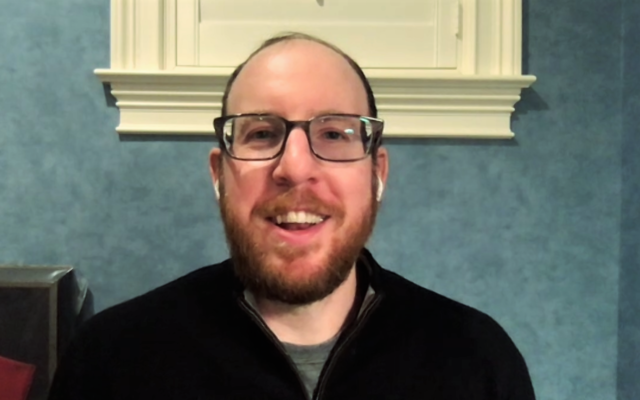 Dan Grunfeld describes basketball's ability to help his family after the Holocaust. Screenshot by Adam Reinherz

It’s rare for a Jewish person to make a living playing professional sports. And it’s even more uncommon for an accomplished Jewish athlete to be the son of Holocaust survivors. Still, Ernie Grunfeld — a Romanian-born former basketball player and executive in the National Basketball Association — achieved the improbable.

Many people know about Ernie Grunfeld’s career, his son said.

As a college student at the University of Tennessee, Ernie paired with future NBA Hall of Famer Bernard King and became the school’s leading scorer. In 1976, Ernie won a gold medal with Team USA in the Olympics. Between 1977 and 1986, he played for the Milwaukee Bucks, Kansas City Kings and New York Knicks. Once his playing days ended, Ernie spent nearly 30 years as an NBA executive.

Ernie’s parents survived the Holocaust and married in Romania shortly after the war. A year later, their son Leslie Grunfeld was born. Eight years later, Ernie was born. Despite living in post-war Romania and growing their family, communism made life hard for the Grunfelds, Dan said: “My grandmother still talks about it. There was no freedom. They had friends who were jailed, tortured, killed, for speaking one word against the government.”

In 1964, the Grunfelds moved to the United States. They found jobs in Queens, New York, and began adapting to their surroundings. But the joy of new beginnings quickly vanished, when a year after their arrival Leslie was diagnosed with leukemia; within a year of the diagnosis, 18- year-old Leslie died.

“For my grandparents to have survived, to have fled communism, to have a chance at a new life but then to lose their son, and for my dad to lose his brother, it's a hole that can't be filled,” Dan said.

Ernie responded by heading to the nearby city park. Local kids had often taunted Ernie. He was someone who spoke Hungarian, Romanian and Italian fluently, the neighborhood kid who ate strange foods and had never touched a basketball, his son said.

“He was a fish out of water in New York City,” Dan said, “and then he loses his brother.”

Ernie realized that the court offered community. And so, after being uprooted from his homeland, and with a backdrop of the Holocaust, communism and the loss of a sibling, Ernie started playing.

But discovering basketball is just one of several family miracles, Dan explained. There are also the two times Raoul Wallenberg saved Ernie’s mother’s life during the war; how Ernie’s parents escaped Romania with the money they’d saved; and the moment when Ernie’s grandparents saw their son win an Olympic gold medal for Team USA. 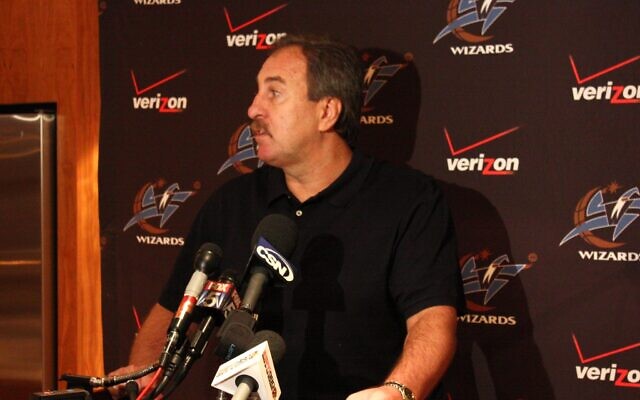 Ernie Grunfeld at a 2009 press conference. Photo by truthaboutit via Flickr at https://www.flickr.com/photos/truth_about_it/3952619562/

Dan — a former college basketball player at Stanford University who later played professionally in Israel and Romania — spent a year-and-a-half collecting his family’s history by interviewing his father and grandmother. The efforts resulted in the November publication of “By the Grace of the Game: The Holocaust, a Basketball Legacy, and an Unprecedented American Dream.”

While speaking with members of Temple Sinai’s Brotherhood and members of the men’s club of Park Synagogue in suburban Cleveland, Dan fielded questions about the book, his family and the importance of Yom Hashoah, which began this year the evening of April 27.

He described his grandparents’ work ethic and recounted a story his 96-year-old grandmother still tells about what it took for her and her husband to finally see their son on a court.

Nearly 50 years ago, Dan’s grandparents were working at their fabric store in Queens when the phone rang. It was Ernie’s high school basketball coach, who asked if they wanted to see their son play. Until then, all the Grunfelds knew was that their son enjoyed something they considered recreational. The following week, they made the unprecedented move of closing their store early and traveling to Forest Hills High School to see a game. Once they arrived, however, the gym doors were closed and an usher barred the couple’s entrance because the game had already started. In their broken English, they tried speaking with the usher. Finally, Dan’s grandmother told the man that her son was Ernie Grunfeld. The usher’s eyes “lit up, and he said, ‘Well, why didn’t you say that?’”

After being escorted into a packed gymnasium, the Grunfelds looked around at an environment they’d never before witnessed. Dan’s grandfather nudged his wife with an elbow and asked in Hungarian, “If Ernie is so great why isn’t he playing? Why isn’t he on the court?”

“My grandma grabbed him. And she said, ‘Look right there. That's Ernie.’ She pointed to the middle of the floor, and it's so symbolic,” Dan said. “My grandfather couldn't recognize my dad. Like he literally had transformed. He had never seen him so powerful…He’s 6-foot-6 — even in high school he was 230 pounds — he was a man.”

The story, Dan said, is one of many he clings to, especially during the week of Yom Hashoah.

“We have to talk about what happened, we have to remember,” he said.

“My grandma has always said just because a story is difficult, doesn't mean you shouldn't tell it,” he continued. “Life is complicated. There are moments of great joy and beauty and happiness and there are moments of great pain and sadness and sorrow. My family story reflects that and my book reflects that.” There’s a dichotomy of darkness and light, he added, “but there’s much more light.”

Todd Miller, vice president of Temple Sinai’s Brotherhood, said Dan’s words were “stimulating and thought-provoking,” and that Dan’s “articulateness and sincerity” were evident throughout the program.

Drew Barkley, Temple Sinai’s executive director, said he was pleased the congregation could partner with like-minded Jewish Clevelanders on an event that encapsulates sports, the Holocaust and Jewish identity.

“Hopefully we can do more of it,” Barkley said. PJC