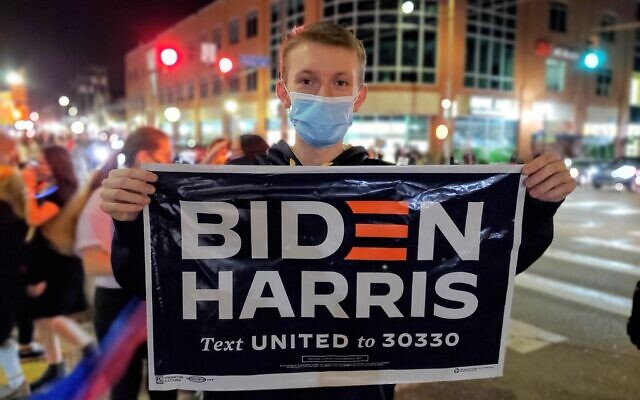 Andrew Clinton stands on the corner of Forbes and Murray avenues. Photo by Adam Reinherz

Hours after The Associated Press called Pennsylvania in Joe Biden’s favor on Nov. 7, the streets of Squirrel Hill erupted in celebration.

Throughout the neighborhood, residents shook cowbells, clanked pots, even blew vuvuzelas. At the corner of Forbes and Murray avenues, a cacophony of car horns, shouts and screams from Biden supporters driving by — some hoisting handwritten posters from opened sunroofs — harmonized with feverish clapping, bursts of song and trumpet blasts by East End residents clustering on the four corners of the Squirrel Hill intersection.

The scene, which lasted well into Saturday evening, included celebrants of all ages, races, genders and religions. Costumed participants — one man was dressed as Uncle Sam — bopped beside supporters toting glow sticks and signs, as well as several attendees with tzitzit flailing. At one point, young Lubavitch students lifted each other into the air and chanted verses about messianic redemption, while a nearby dancing middle-aged woman said the collective levity reminded her of “being in her 20s.”

“It’s amazing to see people of all faiths coming together to celebrate the occasion,” Squirrel Hill resident Michael Kirshenbaum said.

Andrew Clinton, donning a light blue yarmulke, paraded along with masked dancers. Clinton said that after months of effort on behalf of the Biden-Harris campaign it was time for jubilation.

“I knocked on so many doors, I donated every spare penny I had,” Clinton said. “I got over 10 people to turn out and vote. I worked really hard. I love Joe Biden.”

Fireworks lit the nighttime sky as the dancing and shouting continued.

Clinging fervently to her “Nope” sign, Adriane Pacella, of Regent Square, said she chose to celebrate Biden’s presumptive win in Squirrel Hill as an act of solidarity. Pacella recalled the events of Oct. 27, 2018, and President Donald Trump’s subsequent visit to Pittsburgh — which led to a protest — and noted that of all the locations to mark the 2020 election’s outcome, she was happy to be in Squirrel Hill.

“I hate Trump and am a Biden fan obviously,” she said. “I’m just excited to let it out because we won.” 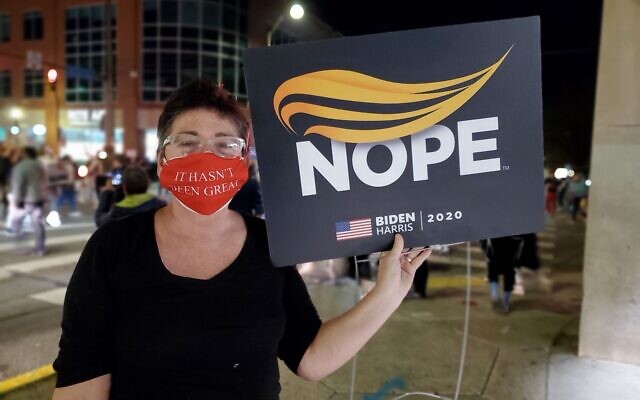 Adriane Pacella stands on the corner of Forbes and Murray avenues. Photo by Adam Reinherz

As of press time, Trump was contesting the election results in the courts of several states, including Pennsylvania.

Pittsburgher Jon Tucker, who was not in Pittsburgh on Nov. 7, read about gatherings like the one in Squirrel Hill. “It’s better to have celebrations in the streets than riots,” he said.

“It remains to be seen if Biden unravels some of the inarguable progress that Trump had with Israel,” he said. “I would hate to see any of that.”

Moving forward, Tucker, a member of Pittsburgh’s Republican Jewish Coalition, would like to see the Republicans retain control of the Senate.

“Say what you want about Mitch McConnell — nobody is sure how he’s going to behave — but I would like to see a push to the middle,” Tucker said. “I’m looking for balance in government.”

Jimmy Zawada, a Chatham University student, said he didn’t sleep much throughout the election and, despite Biden’s victory, remained concerned about the government’s future.

“I’m a little disappointed that the Senate is still in question because nothing will happen if Mitch McConnell is in control,” he said.

The American Jewish Committee emphasized the strength of democracy in a statement from its CEO David Harris.

“The United States is one country with one destiny,” Harris wrote. “That vision, that reality, has been sorely tested as never before, in an era of heightened polarization in American society, and amid the challenges of the coronavirus pandemic, its economic consequences, and a decline of trust among some on various sides of the political spectrum in government institutions and practices. The record-high voter turnout, and hard-fought campaign by both candidates and their respective parties, is an inspiring testament to the strength of American democracy.”

“There is no doubt that in this election, when Donald Trump won in the key battleground state of Florida by fewer than three points, the Jewish vote was critical to his victory,” Brooks wrote.

“We pray that he will lead our nation with wisdom and discernment and we pledge our support to building on the foundation of liberty that is the blessing of all Americans,” the umbrella organization posted. “We also congratulate Vice President-elect Kamala Harris on her historic victory. Her rise to the vice presidency is yet another indication of the ability of the United States of America to expand its pool of leadership.”

“As 2020 voters, we changed the course of our country,” wrote Stosh Cotler, CEO of Bend the Arc: Jewish Action. “We’ll take our place in history as the people who rose up across religion, race and all aspects of our identities, to preserve the dream that our country can be a place where freedom, safety and belonging are for all of us.”

Back in Squirrel Hill, Zawada said he followed national reactions to the election. The work ahead remains, he continued, but for the moment, he appreciated the “beautiful” scene at the corner of Forbes and Murray avenues where the community celebrated exuberantly, but cautiously: When streetlights turned green vehicles noisily passed through, and when the lamps turned red people danced in the streets. PJC