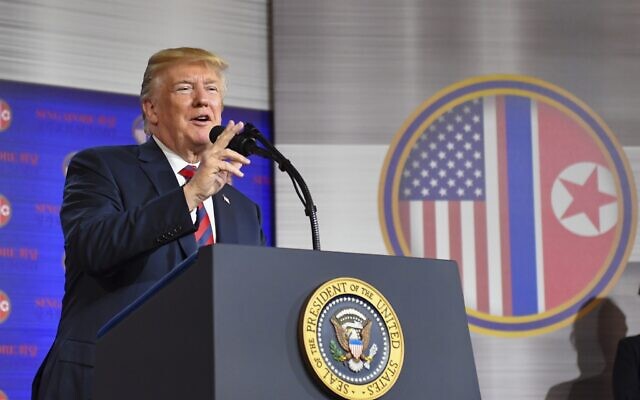 He’s rude and crude; petulant; obnoxious; thin-skinned; viciously attacks those who criticize him; and narcissistic. Not the ideal traits for the leader of our country. And yet I support him over Joe Biden.

First, Israel is my top priority, especially as it faces existential threats from Iran and Hezbollah. I trust Trump to come to the aid of Israel if the need should arise. He has been by far the best friend of Israel of any president since Truman. He has moved the U.S. embassy to Israel’s capital, Jerusalem; recognized Israel’s sovereignty over the Golan Heights; cut off aid to the terror-supporting Palestinian Authority; recognized that the Palestinians were the true stumbling block to peace; fully supported Israel at the United Nations, including appointing superstar Nikki Haley; pulled us out of the disastrous Iran nuclear deal; and orchestrated the impossible: the monumental agreements of the UAE, Bahrain, and Sudan to establish relations with Israel. There is a reason that a good majority of Israelis favor Trump over Biden.

Contrast that with the Obama-Biden record on Israel: betraying Israel by helping to draft and refusing to veto an anti-Israel U.N. resolution; supporting the rabidly anti-Israel Muslim Brotherhood in Egypt and Qatar; failing to realize that the Palestinians were not true peace partners; and, worst of all, entering into the Iran nuclear deal, the worst agreement since Chamberlain’s “peace in our time” deal with Hitler, sending over $100 billion (including a plane full of cash) to Iran in return for promises by Iranian mullahs to stop nuclear development for a mere 10 years.

Iran has used the $100 billion to support terrorism and develop long-range missiles, while (surprise!) surreptitiously continuing development of nuclear capability. A Biden administration is also likely to return to the John Kerry-Martin Indyk strategy of pressuring Israel to make concessions harmful to its security in return for idle promises from the Palestinian Authority.

As to the U.S., I support Trump’s strategy on immigration. Any immigrant, regardless of race, religion or color should be welcomed with open arms and supported by all our social agencies. But the U.S. cannot afford to take in tens of thousands of people who have grown up with a profound hatred of Israel and Jews. If, for instance, the U.S. followed Europe’s example and permitted 100,000 refugees from Syria to enter the U.S., and only 1% were radical Islamists, we would have 1,000 radical Islamists residing among us. We also will have more Ilhan Omars in Congress spewing anti-Semitism and supporting cuts in aid to Israel. Sorry, I do not want beheadings in the streets of Pittsburgh, more honor killings, and newspaper employees killed for an offensive cartoon. Rather, let’s generously try to aid the refugees in their own lands where possible, and embrace them all, like the Muslims in the UAE, Bahrain, Sudan and elsewhere, who share our intense desire for peace and friendship.

Likewise, we cannot absorb all of Central and South America. Legal immigration should continue; but simply opening our border for anyone to come in hurts our low-wage earners and brings in callous criminals along with those who we would otherwise welcome as legal immigrants. As to those who come to escape poverty, while many could be admitted legally, the better course would be to assist them economically and in other ways in their home countries — something that was not possible to accomplish with our ancestors who came over in the late 19th and early 20th centuries and with those refugees escaping the Nazis. It’s simply not the same.

Is Trump a racist? A white supremacist? If I thought so, I would not support him. Although one would not know it from reading the New York Times or watching CNN, he has repeatedly condemned white supremacists. The Charlottesville myth, perpetuated to this day by leftists claiming he was praising white supremacists and Nazis, is pure fiction. Listen to the whole tape. Significantly, Trump signed the First Step Act, which reformed the criminal justice system, resulting in the release of thousands from prison (90% of whom were Black); recently signed an executive order on police reform; promoted opportunity zones for investments in Black communities; significantly increased federal funding for Black colleges; and declared the KKK a terrorist group. The white supremacist monsters who killed my friends at the Tree of Life building and at the Chabad of Poway had anti-Trump screeds on their postings.

Anti-Semite? Great supporter and friend of Israel: Jewish daughter, son-in-law, and grandchildren; Jewish appointees to prominent positions in his administration; important executive order to protect Jewish students under Title VI. No. He’s not an anti-Semite.

On the economy, prior to COVID-19, Trump policies helped the U.S. to a booming economy, lowering unemployment rates for all segments of our population, including Blacks and Hispanics. I trust him on a post-COVID economic recovery over Biden’s increased taxes, increased regulations, and other adverse growth policies.

On COVID, Trump early on banned travel from China, thereby saving what some believe to be over 2 million lives, while Biden blasted the move, calling Trump xenophobic. This is a worldwide plague where no one had all the answers, including Israel, which recently returned to quarantine. However, Trump was able to mobilize the country for rapid production of ventilators, increased hospital capacity, and the development of soon-to-be deployed vaccines in record time.

On character, I note that Biden is a well-documented plagiarizer; a blatant liar on his educational and other background information; a politician who tells his audience whatever he believes they want to hear (e.g., fracking no; fracking yes); fails to denounce and disavow the support of Ilhan Omar and her cronies; and is politically owing to the far-left extremists who are in the process of taking over the Democratic party I used to support. And, when all the evidence comes out regarding Burisma, China, Russia, and Hunter, I believe that we will find out that Biden is one of the most crooked politicians that we have ever had. He has a nice smile, but a bad smell.

Of course, if I believed the lies of the New York Times, CNN, and other mass media, who have lost all objectivity, I could never vote for Trump. But I don’t. I view them critically and objectively, just as I do from the few media outlets on the right. Just as these outlets are biased and fail to report the truth about Israel, they are biased and fail to tell the truth about Trump — and even more so.

Do I agree with all of Trump’s policies? No. Am I a fan of his character? No. But when it comes to Israel, immigration, our economy, national defense, the selection of non-activist judges, and opposition to the extreme leftists who have taken over our universities, mass media, and cultural institutions, I’m for Trump. PJC

Charles Saul is an attorney in Pittsburgh.