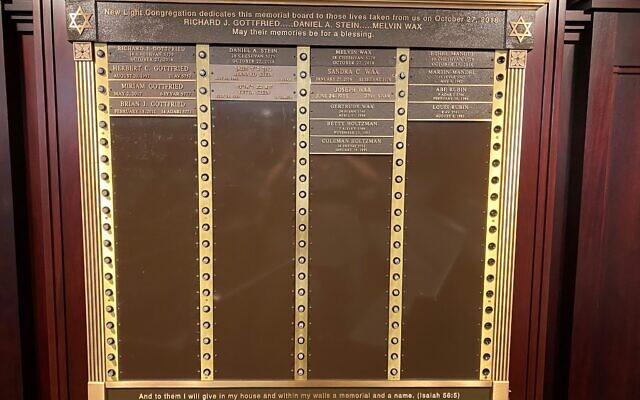 New Light Congregation unveiled a new Memorial Board during the yahrzeit of Richard Gottfried, Daniel Stein and Melvin Wax. Photo by Jim Busis.

Victims of the Pittsburgh synagogue shooting were remembered by congregations Dor Hadash, New Light and Tree of Life on Wednesday, Nov. 4 and Thursday, Nov. 5 — 18 Cheshvon on the Hebrew calendar — marking their second yahrzeit.

The wider Jewish community was invited to participate in the commemoration at Torah study sessions Wednesday evening and Thursday afternoon taught by rabbis and guest teachers. The topics ranged from randomness and moral agency, to the legacy of Supreme Court Justice Ruth Bader Ginsburg, who died Sept. 18.

In addition to a private minyan observed by all three congregations, each marked the yahrzeit privately with individual commemorations.

New Light Congregation hosted a prayer service Wednesday evening during which the congregation unveiled a memorial board honoring Richard Gottfried, Daniel Stein and Melvin Wax, who were killed during the attack.

“It had actually been completed several months before, but we decided to wait until the yahrzeit for the unveiling,” said Stephen Cohen, co-president of New Light. “The plaques that are on the board are all the members of their families who have passed. We’ll add to it as the years go on. It was a very emotional service.”

Tree of Life also observed a traditional evening prayer service Wednesday evening followed by a martyology, or a catalog of martyrs, compiled by Rabbi Jeffrey Myers, in memory of Joyce Fienberg, Rose Mallinger, Cecil Rosenthal, David Rosenthal, Bernice Simon, Sylvan Simon and Irving Younger. The martyology included works by poets in response to Oct. 27, as well as other sources.

“It was important to engage with faith leaders who reached out to us since day one and continue to give comfort, support and friendship, and reach back out to them in an expression of gratitude and to be able to show to the congregation that love is still there two years later,” Myers said.

“Everyone had a part in the service,” she said. “It was just so sweet.”

Thursday evening, Dor Hadash hosted a panel discussion immediately following sundown, concluding the yahrzeit for Jerry Rabinowitz, who was killed during the attack.

“The panel was about where do we go from here,” offered the congregation’s president, Donna Coufal. “It looked toward next year, to the third commemoration and where we want to be.”

New Light’s Cohen said the 10-day period between the Oct. 27 public commemorations on the Gregorian calendar and the Hebrew yahrzeit, was hard on the families of those murdered. He noted, however, that the extended period of remembrance gave the congregation time to honor the victims and to “remember the happy times we had together — the community, the families. It wasn’t just a one and done, but a day after day thinking about them.”

While the yahrzeit ended Thursday evening, Cohen said New Light’s remembrance culminated Sunday with the dedication of a memorial at the congregation’s cemetery in honor of the victims.

“Oct. 27 is the Pittsburgh day of mourning,” he explained. “That’s our public day of mourning. Yahrzeit is a uniquely Jewish thing. We need time to reflect as a Tree of Life family, to observe together.”

“I like to quote my friend who says everything takes two years to heal,” said Glickman. “This is the two-year mark, so we should be on our way to healing.” PJC