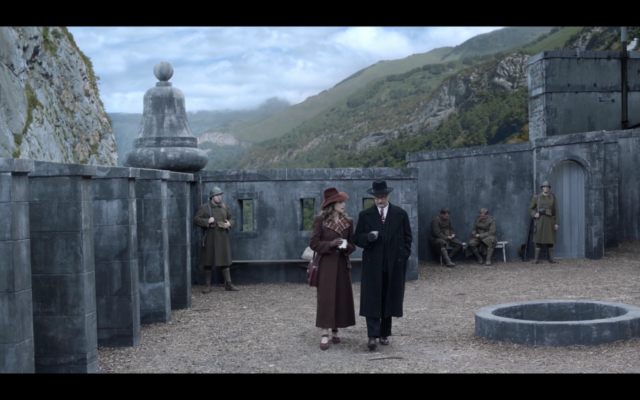 Windows smashed, synagogues and businesses burned to the ground, property stolen, riots in the streets of cities across the country.

Kristallnacht, or “Night of Broken Glass,” was a pogrom against the Jews committed by Nazi paramilitary units and German civilians on Nov. 9-10, 1938. Historians generally regard it as a prelude to the Holocaust.

In Germany, hate, intolerance and violence against the Jewish people were sanctioned by the state in the half-decade lead-up to Kristallnacht, resulting in the pogrom across the country following the assassination of German diplomat Ernst vom Rath.

“When I talk about the five years before Kristallnacht, the Nazis are incrementally introducing things that harm Jews, and because there is not enough of an outcry, the Nazis know they can do more,” explained Lauren Apter Bairnsfather, director of the Holocaust Center of Pittsburgh. “This speaks to the power of the individual to speak up when we see something happening that we know is wrong. This is one of the many lessons we get from studying the Holocaust.”

The Holocaust Center will commemorate the 82nd anniversary of Kristallnacht with an online discussion of the film “An Irrepressible Woman” in conjunction with Film Pittsburgh on Tuesday, Nov. 10.

Joining Bairnsfather for the panel discussion will be Film Pittsburgh Executive Director Kathryn Spitz Cohan; 2020-2021 Holocaust Educator of the Year Jim Lucot; historian David Rosenberg; and Ed Friedman, who will discuss his collection of French artifacts on long-term loan to the Center.

The 2019 film recounts the real-life romance of Jeanne Reichenbach and Léon Blum, a Jewish-French socialist politician and three-time prime minister of France.

“Kristallnacht was the moment when Jewish men were arrested for being Jewish men,” said Bairnsfather. “It’s the end of a process introducing more laws that restrict Jewish life, discriminate against Jews, sanction violence against Jews. It’s the moment, if you’re paying attention, that the writing is on the wall. With this program we are connecting Kristallnacht in concrete ways with France.”

The film offers viewers an opportunity to reflect and understand history far better than reading about the same subject in a book, said Spitz Cohan.

“Films show and encourage emotion,” she noted. “The visual image is so accessible, which is why movies are so popular.”

Although watching the movie is not necessary to attend the program, anyone registered is able to screen the film online before the event. The Edgar Snyder Kristallnacht Commemoration Fund is subsidizing the ticket price, making the film available to attendees on Nov. 9 or 10. This year marks the 20th anniversary of the fund started by Pittsburgh attorney Edgar Snyder.

Snyder, who served as the Holocaust Center’s board chair in 1999, said that it was a Jewish Federation of Greater Pittsburgh trip to Israel in 1991 that ignited his passion to become involved with the Center.

“It had a very emotional impact on me,” Snyder said. “It was my first time with, at that time, Russians making aliyah. It started a whole emotional — and I don’t want to say religious — but Jewish feeling within me, after experiencing all those people who gave up everything to come to Israel and wait and kiss the ground.”

During the trip, Snyder visited Yad Vashem for the first time. That visit, combined with first-hand accounts from survivors, created a desire within Snyder to get more involved in the community and, eventually, to create the Edgar Snyder Kristallnacht Commemoration Fund.

Snyder pointed out that the fund he and his ex-wife started was not responsible for the Center’s commemoration of Kristallnacht, but rather allowed for more robust programming and events.

He is excited to be able to watch the program this year online because he is not currently in Pittsburgh. He is proud, he said, that the program “is an extension of what we started in the year 2000.”

Snyder stressed that the lesson learned from Kristallnacht isn’t partisan.

“It is not a political statement,” he said, “but clearly the messaging of intolerance and prejudice and bigotry — at that time it was for the Jews, it doesn’t have to be for the Jews, it can be toward anyone — if it goes unabated and unchecked, and Kristallnacht was that type of event, we all know what happened after Kristallnacht.”

To register for the Kristallnacht commemoration, go to hcopgh.org. PJC