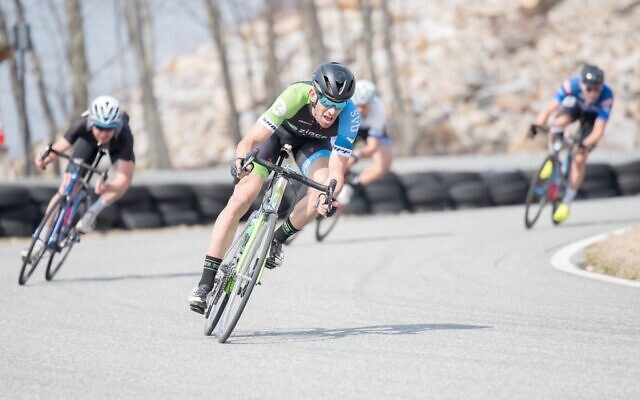 Sunny days and shuttered summer camps have sent many parents in search of outdoor activities for the family-at-large. Whether it’s neighborhood walks, bird watching or exploring the region’s many trails, people are heading outside after months of indoor quarantining.

Prior to the pandemic, neither Elli nor his wife Ilana worked from home, but when COVID-19 closures began, the family of seven was thrust into a now familiar scenario: the parents were working from home while their children simultaneously attended virtual school.

As much as the Kanal family saw each other throughout the day, Elli and Ilana were looking for ways to spend time together as a family outdoors. Cycling promised an option for bonding and exercise, so the parents, who already owned a rack and several bicycles, purchased some new two-wheelers and set out for adventure with their children.

The Kanals soon discovered that not only was cycling a good way to spend time together outdoors, but there also was the unexpected benefit of promoting independence, explained Ilana.

As opposed to the parents choosing a destination, and then venturing out as a group, such as to the Ghost Town Trail in Indiana County, the Kanals’ older children became actively involved in the selection process. The kids now research prospective routes by talking to friends or reading reviews online, said Ilana.

Elli encourages other parents to invite input from their children about rides, but said the heavy lifting, or carrying, probably still requires an adult: “Anytime we go anywhere we pack food. That’s how you keep your kids happy isn’t it?”

Alan Orlansky, a self-described “all around bicycle person,” has noticed an increased number of families riding together recently.

Orlansky, who has been in the bike business for 30 years as a mechanic, former store owner and avid cyclist, is excited by the surge in cycling, but cautioned riders about the perils of some local routes.

“On weekends, the river trails, from Costco to Station Square, the Jail Trail, the North Shore Trail, the main ones within a couple of miles of the Point, are too crowded in my opinion and somewhat dangerous,” said the Squirrel Hill resident. Parents who are looking for a casual, enjoyable and safe ride, might consider “driving to Boston, PA, or somewhere further out…even going to the Pump House at the Waterfront and heading south is better than heading toward the city.”

When trails become overpopulated, it’s not only difficult to socially distance, but there is an increased likelihood of accidents, explained Orlansky.

Cycling is a great way for families to get out and do something together, but “the main thing to consider is safety,” he said, adding that parents should make sure everyone is wearing a helmet and that the bicycles have been recently inspected.

It’s also important to remember that “with COVID-19, a lot of water fountains aren’t operating because the parks are closed, so take water with,” he said. “It’s harder to get provisions when you’re out, not everything is opened up.”

When families head out for rides everyone should “be aware of the rules of the road,” said iedman, a Squirrel Hill resident and father of three. “Make sure everybody is keeping their eyes up and paying attention. Your bike goes where your eyes are going, so wherever you’re looking you’re going to ride there.”

Friedman encouraged people to “ride defensively,” but also said that “not everything has to be so serious.” Families should “have fun and make an enjoyable thing out of it. Bring a lot of snacks, and stop and take pictures.”

Friedman, a USA Cycling Level 1 coach and Category 1 cyclist has competed internationally throughout the years, but offered several suggestions for parents seeking local options: “Two great places to start are the oval on Washington Boulevard, and when you graduate that, the GAP (Great Allegheny Passage) trail.”

“Highland Park is nice. It has a big hill in it, but so does everything else in Pittsburgh,” he added.

Friedman’s children are 11, 9 and 7, and as much as his family has enjoyed cycling together in the past, he’s even more excited about the future.

On June 23, the City of Pittsburgh announced a 10-year plan to add 120 miles of new trails, bicycle lanes and neighborhood improvements, all while making cycling safer and enabling residents of all ages and abilities to access grocery stores, parks, schools and places of employment, by bicycle and “other small mobility modes.”

“Any way we can increase other modes of travel besides cars is better for everyone, even the drivers if they don’t want to admit it,” said Friedman. “Cycling reduces congestion, reduces pollution and increases public health.”

There is a lot of room for optimism, continued Friedman: “The bicycle is the machine of freedom. Think of all the stories of people going to explore new things, whether it’s in their neighborhood or the other side of the world.”

Even so, there’s also value in looking not too far down the road, noted Orlansky.

With so many individuals seeking space outdoors, there are times when the trails are being simultaneously used by cyclists, hikers and bird watchers.

People should realize that these paths are being shared, and everyone needs to be safe, he said. “That way you can have fun, and come back tomorrow and do it again.” PJC