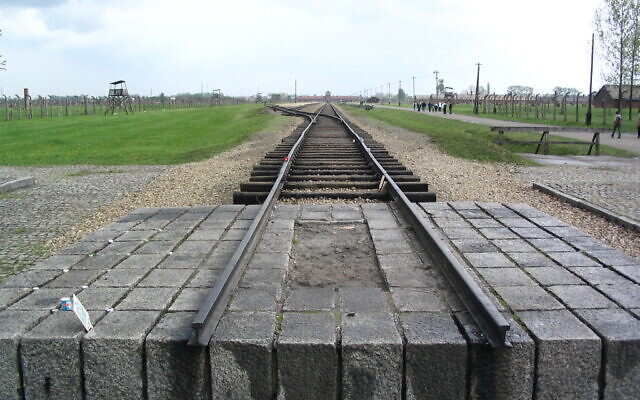 Summer vacation has arrived, but several local educators are already looking ahead to their fall lesson plans.

After returning from a 10-day trip to Poland with Classrooms Without Borders, some western Pennsylvanian teachers are rethinking their approach to Holocaust education and retooling related curricula.

Michele Russo, an English teacher at Seneca Valley High School, has taught Holocaust studies for nearly 15 years, but visiting Poland from June 25 to July 4 gave her a chance to “connect the dots,” she said.

Prior to the trip, Russo kept coming across various “inconsistencies” in her understanding of the Holocaust. She didn’t know why only some survivors had tattoos on their arms, or why not every prisoner of a concentration camp had their photo taken.

Touring Poland with CWB, and nearly 50 other educators, not only answered those questions, but also gave her a chance to “get to the deep stuff,” which will be helpful when school starts again, she said.

Watching Chandler graciously engage with the property’s occupants was perplexing, Russo said: “That’s his home. That house was stolen. They don’t have a title for that home. They don’t own that home.”

Russo said she started thinking about all the other properties across Europe and the people who were stripped of proper ownership.

Being able to personalize the horror of the Holocaust was one of the biggest takeaways, agreed Marie Dufalla, a middle school librarian at Riverside Beaver County School District.

For instance, before entering the Auschwitz concentration camp, Dufalla assumed she’d spend the entire day in tears given the amount of death that occurred there.

“The reality of it is that it is just a building with bricks or wood, and what makes it impactful is hearing a survivor speak or seeing the pictures of people and their families,” she said. “Focusing on one person helped me make sense of it.”

Dufalla said that she and her colleague Chelsea Kordecki, an English and language arts teacher at Riverside Middle School who also joined the trip, hope to share similar ideas with their students.

How exactly those lessons will be conveyed has yet to be determined, Kordecki said, but the goal is “building the narrative to the students and helping them realize there is more out in the world than just what they’ve seen.”

Riverside is located in Beaver County. The area is largely rural and many of its students have never left western Pennsylvania. In fact, some of the students “have never even been to Pittsburgh,” Kordecki said.

As a result, many students may not know a lot about Jewish people or diverse cultures, but studying the Holocaust is important, Kordecki said. Touring Poland with a survivor and learning more about the pre-war years made clear that the Holocaust is “something that can happen again,” he said. It’s imperative that students understand the consequences of “not standing up for yourself or speaking to something that is going against a friend.”

During a visit to Chandler’s hometown, Andy and other travelers spoke with Ukrainian refugees and learned about the community’s efforts to help.

Andy said he plans on contrasting the actions of Polish residents and communal leaders now with what transpired nearly 80 years ago when Chandler’s “Polish Catholic neighbors sat by.”

Tsipy Gur, founder and executive director of CWB, said the organization has led numerous trips to Poland, but this summer’s excursion provided an awareness that educators and students desperately need.

“This trip is not simply about the Holocaust. We teach about what life used to be in Poland,” she said. When educators and students have this knowledge, it becomes clear that the Holocaust “didn’t have to happen.”

That realization hopefully generates new inspiration for both teachers and students, Gur continued. “We want them to think about what they are going to do to change the world and how they’re going to make it a better place so the Holocaust doesn’t happen again.” PJC