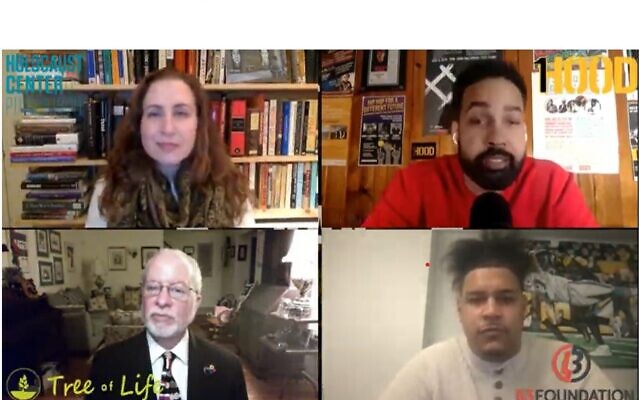 Pittsburgh Steelers offensive lineman Zach Banner entered the orbit of Lauren Apter Bairnsfather, who leads the Holocaust Center of Pittsburgh, due to a Tweet.

DeSean Jackson, a wide receiver for the Philadelphia Eagles, had shared anti-Semitic quotes attributed to Adolf Hitler on Instagram back in July. Banner, a cross-state rival who was part of a predominantly Jewish fraternity in college, took to Twitter to call for those fighting racism and anti-Semitism to work together. In the months since, he has become something of a celebrity in Pittsburgh’s Jewish circles.

“It was just stepping up for what’s right,” Banner told a virtual audience on Feb. 17. “We preach for the identity of Black and brown people … but you can’t do that by turning off the light of Jewish people in Squirrel Hill.”

Banner shared his most recent thoughts on combating hatred this week during “Athletes Against Antisemitism,” a YouTube event featuring athletes and local Jewish leaders talking about the specter of bigotry and the benefits of education and knowledge. Guests also repeatedly stressed the need for Black Lives Matter followers and those mourning the synagogue shooting at the Tree of Life building to work together in toppling white supremacy.

Both Banner and Jasiri X, who lives in Pittsburgh but grew up on Chicago’s South Side, talked about “two Pittsburghs” — one that wins national awards for its livability and a second where the working class and people in minority neighborhoods struggle.

“My experience was 100 percent Black — and then I moved to Monroeville,” Jasiri X laughed.

“The power of Pittsburgh is the relationships I’ve been able to build with people. This is where I make my home [and] I’m glad to finally be accepted into the Pittsburgh community.”

Banner said he received backlash for inviting Jasiri X to the forum, in part because of offensive comments the hip-hop artist previously made about Jewish people.

Jasiri X said those comments came from a place of ignorance, and expressed regret.

“I’m willing to be held accountable,” Jasiri X said. “For me, my job is to now exhibit better behavior, continue community work, learn more, keep my ears open and fight — not just for my community, but for all communities.”

“We’re really at the beginning of walking a path together,” Bairnsfather told Jasiri X. “And this is where we start.”

Myers talked about the Jewish concept of teshuva and repentance and called Jasiri X’s reckoning with his past comments “a public teshuva.”

“Let’s find ways we can work together,” Myers said. “We’re stronger together when we build a better Pittsburgh.”

That theme echoed throughout the evening, with Jasiri X at one point saying “white supremacy violence is not just a Black issue or a brown issue.”

“Why shouldn’t we be in solidarity to protect each other?” he asked.

Bell, who plays for the Washington Nationals, said the shooting at the Tree of Life building opened his eyes to the complexity of bigotry in the United States.

“That was the first incident [where I thought], ‘It’s not just hatred against Blacks in America that needs to be addressed,’” Bell said. “With the Tree of Life, [it] opened up my eyes to what’s going on, and then that year with Ahmaud Arbery, George Floyd …. Hatred is one in the same.”

Bell stressed the need for people to read more about current events and American history, a point Banner appreciated. Banner and Bell have participated in educational forums with the American Jewish Committee, and both pledged to work with their respective teams to endorse the International Holocaust Remembrance Alliance definition of anti-Semitism.

“It’s important that the players like us … keep standing up,” Banner told the group. “It’s our privilege to help others.”

Clark, who was Skyping from France, was sidelined for much of the forum by technical issues. (Bell also was interrupted briefly when his dog and cat began fighting off screen.) But she closed by telling her powerful story of making aliyah and playing basketball in Israel as a biracial woman. She also stressed the importance of activism in the WNBA.

“We’re a league of diverse women,” Clark said. “It’s only natural for us to fight for causes that affect us.”

Banner echoed her words in his closing remarks, touting the importance of being an educated public figure.

“If we don’t know enough about something,” Banner said, “we have to learn.” PJC